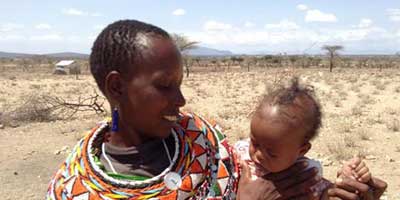 This Samburu mom, Ngeendwa, has promised not to mutilate her precious daughter.

Pastoralist Child Foundation was formed when Sayydah Garrett went on safari to Kenya by herself in August, 2012.

She had a lifelong desire to see her favorite animal, the elephant, in its natural habitat.. Sayydah also fosters an orphaned elephant at the David Sheldrick Wildlife Trust in Nairobi. So, off she went! The safari included a visit to a Maasai village in close proximity to the lodge where Sayydah resided for 4 days. Upon arriving at the village, a man noticed that Sayydah was alone and offered to take pictures of her with her camera. Sayydah kindly obliged. Sayydah was the only visitor in the village for an hour. She was welcomed by the beautiful Samburu tribe with songs and dances and was happy to join in the celebration.

Sayydah was fascinated by the tribe and excitedly returned to the lodge with many pictures. She called to Samuel, a waiter in the restaurant, and said, “Look at these pictures!” Samuel knew everyone in the pictures because this was his village – Namayiana Village. He spoke at length about the harmful effects (he called them “vices”) of FGM and forced marriages in his community. He said, “Sayydah – I want to start a community based organization to eradicate female genital mutilation and forced marriages before it’s my youngest sister’s turn to get cut. Girls should be allowed to go to school.”

Sayydah was shocked to hear this but at the same time delighted to hear a man voice his concern about the plight of girls in his community. She responded with, “Well, I live 8,000 miles away but I’d like to help you. I used to work for a homeless agency and have nonprofit experience. I can help with fundraising, write proposals and raise awareness.” Samuel smiled, pointed at Sayydah and said, “Great! YOU will be our President!” Sayydah said, “Ok!”

Samuel registered the organization as a Community Based Organization in Kenya within 2 weeks and Sayydah also started the 501C3 public charity registration process in the USA. Pastoralist Child Foundation was incorporated in April, 2013 and granted tax-exempt public charity status in August, 2013.

Samburu Warrior - Fighting for the Rights of Girls

“When I was 25 years old my mother developed throat cancer. I cared for her during the last year of her life. During this period we shared many things.

She told me growing up poor, of herding goats as a child, and an early marriage. I knew her to be a deeply caring person and a strong, positive presence for not only her own children, but for all the children in the village, boys and girls.

I learned from our conversations how much she wished she could have gone to school and to pursue a path of education so that she could have done more with her life and for others.

During her last year, she shared with me her dream. She asked me to guide my younger sisters, to educate them, and to fight for the right of all girls to enjoy the opportunities and life my mother didn’t have.

It is not easy for a warrior to learn this lesson and fight for the rights of girls. I am proud of myself, our community, and of the work we are able to do through The Pastoralist Child Foundation.”

The region is primarily inhabited by the semi-nomadic Samburu (cousins of the Maasai tribe) - communities who rely on livestock rearing as their sole source of livelihood.

The climactic conditions are harsh and don’t support crop farming. The soil texture is mainly sand – loamy and susceptible to degradation, while the vegetation is comprised of scattered acacia bushes and shrubs.

The residents are overwhelmingly poor. There is occasional fighting between the Samburu and Turkana tribes due to the stealing of livestock from each other.

The lack of education for girls and women greatly affects their life outcomes.

When girls undergo FGM they’re subsequently considered “women” and many are forced to marry men who are older and sometimes polygamous or infected with HIV/AIDS.

The girls then live lives of servitude – building huts, gathering fire wood, fetching water in crocodile infested rivers, washing, cooking and raising children. Girls secretly suffer but don’t openly display opposition to their lives of hardship because they simply aren’t listened to or respected by authoritative men in the highly patriarchal community.

Girls who have dreams of being nurses, doctors, social workers, teachers and so forth lose hope in ever fulfilling their aspirations.

It’s very sad. Girls with so much intelligence and hope drown in their drudgery. Some girls make colorful beaded jewelry and souvenirs for the tourist industry. But that’s hardly fulfilling when life offers so much more.