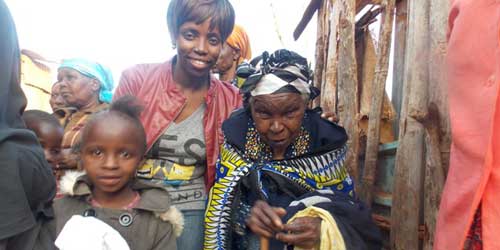 Compassion CBO distributes clothes to the elderly and vulnerable children

Our First Longterm Overseas Volunteer - And a New Website

Celebrating 10 years of Compassion CBO was like a seed opening its pod and a new life root taking position for a new beginning...

At our Children's CentreWe became more exposed to the world more than ever before. January 1st, 2015 had great significance to us because it was the first day we received an international volunteer, Linnet Griffith-Jones, who has become a volunteer of all seasons. Her arrival was preceded by a training manual from an MBA team at the Kelly School of Business at Indiana University (USA), through the Power of Love Foundation, which laid the basis of training and equipping women with knowledge on entrepreneurship.

Linnet has an eagle eye; her reports and blogs to the Safe World team brought a comprehensive coverage of Compassion CBO in a new website that has been designed by Andrew Sampson from Safe World for Women.

At one time Andrew, emailed me – I quote, “We need to come up with a new website that will reflect the whole work”. It was helpful to have others to look afresh at our work and to make sure the web content covered it all. By April 2015, the new Compassion CBO website was complete and was put online.

At Anti-FGM Seminar, EmbuSome of the things we were able to achieve during six months of Linnet's internship included four anti-FGM (Female Genital Mutilation) Seminars in Githogoro Slum, Tharaka–Nithi, Embu, and Limuru. We were able to train 15 women's groups and graduate 150 women after the training.

Her down-to-earth trait won her many friends here and everyone guaranteed her security so she moved freely and met women alone in villages without been necessarily accompanied by locals. Her lectures from the seminars will be remembered by many here for she emphasized how FGM is taken seriously in western countries. The locals here recognized how quickly they should stop it after learning that - in the UK, if one is caught, the children are taken away by the government and the culprit is prosecuted.

Here it's happened so often and many times it goes unnoticed.

Linnet with a member of our network.Within that period of her internship, Linnet was able to see chicken project start. The chickens have started laying eggs.

Before Compassion CBO starts a project we make sure it will be self-sustaining and we minimize the risk by starting small before expanding, to avoid massive losses or collapse of the project. Once it succeeds we replicate it with network and community members. Linnet's time here was water-tight: she helped us profile 20 Compassion CBO women's network groups by visiting them personally and working on proposals and writing blogs from her own perspective.

Linnet's blogs were a rubber stamp of what Compassion CBO stands for and its daily activities.

Linnet left us to return to the UK on 4th July, but we now felt fueled more than ever; the same month we conducted three anti-FGM seminars, on 29 and 30th July 2015 in the Nairobi slums. These were held in schools sponsored by Porridge and Rice – whereby we covered three schools and 500 boys and girls who participated were issued with certificates. Other seminars were set for November and December.

Debbie Hollingsworth from Oxfordshire, UK, (a tourist who visited us in 2013), became inspired by our blogs and photos to propose us to the UK public service union, UNISON, as recipients of their fundraising at the annual member conference.

We were among 17 proposed beneficiaries who were shortlisted. Later we carried the day and we were selected, thus receiving a gift of £819.46 which was raised by UNISON members.

Our celebration would have not been complete without the shouting out by Safe World's Chris and Andrew because of our leaking roofs of our classrooms with the El Nino clouds hanging low over our heads that would have forced us to close our school before our term ends.

The good news is that supporters were quick to respond and we now have a secure roof and no pupils will get wet in the class.

Distribution of Clothes - and Ongoing Support

Compassion volunteer Phylis sorting clothes and shoesThis year we were able to collect second-hand clothes and shoes which we distributed to the elderly and needy children here in the slum.

Still we have many unsung well-wishers who remain anonymous yet very active in supporting our work and projects and many who share our posts and 'like; our Facebook page. We consider you all as heroes of Compassion CBO.

Since Compassion CBO is a dynamic organisation, we would like to highlight projects that need support...

We roofed the classrooms, but those classrooms needs to be expanded; they measure 10 by 10 feet and pupils are congested, leaving no space for a teacher to stand while teaching. We would like to double the number of rooms. We have a shortage of classrooms – we need to construct three classrooms to separate the classes where we have combined children under one room; Pre-Unit, Nursery, and Baby care – all of them have over 70 pupils in the same room.

We have many children in neighboring slums who have no access to primary education and we think of a van in near future that can be going round collecting them and bringing them to our Compassion CBO Children's Centre school then return them in the evening. During weekend and holidays, the van can be hired – thus generating income for the school.

Our Chicken Project should be expanded so that most of the women who were trained can each get about five hens for their income. Already we have given two women (from two different groups) two hens each for trial.

We have a Pig Project in which we have been able to train women and provide them with pigs and now they are doing well. Within Githogoro Slum, four families are now rearing pigs, each with an average of 10 pigs.

“Keep for me feathers from the chicken... Next year I may come for a visit and I may need them for fundraising,” I quote one person as saying.

Anyone who wishes to do a fundraising for Compassion CBO, we are ready to give our support. Please contact us.