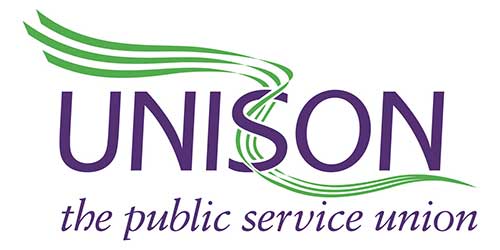 In December 2013, Debbie Hollingsworth (Women's Officer at the Oxfordshire branch of UNISON), visited Compassion CBO while on holiday - and was deeply impressed with their work.

In June 2015, at the annual member conference of UNISON, Debbie proposed that this year's 'bucket collection' (donations collected from members) should go to Compassion CBO in Kenya.
Out of several charities nominated, the UNISON conference selected Compassion CBO as the recipient.

"We celebrate Debbie and UNISON as a whole for their contribution toward Compassion CBO to help fight FGM and empower women in Kenya."
Evanson Njeru.

It all Began With An Email 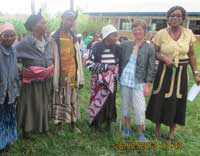 In 2013, Debbie Hollingsworth wanted to make the journey of a lifetime to Kenya and especially had one thing in her heart - to meet grassroots women and to see for herself the challenges they face to earn a living. Not knowing any group of women in Kenya, she googled women projects in Nairobi and that is how she discovered Compassion CBO. She took another step of writing to Compassion CBO requesting whether she could see some of the women's groups and what they do.

“We had heard so much about the high levels of poverty largely experienced by women and children and the interlinked health and inequality issues they face on a daily basis...
I didn’t think it was going to be easy accessing any projects, but amazingly it was. I simply googled ‘women’s projects in Nairobi’ and up popped a link about some grandmothers rearing pigs as a means of earning a living for themselves and their families.
The charity championing the grandmothers was Compassion CBO, a grassroots, not-for-profit, Community Based Organisation working to eradicate poverty through education and sustainable development and to rehabilitate orphans and vulnerable children.”

The Slums of Nairobi

And so it happened that on the 21st December 2013, when many people are in holiday, Debbie and her friend Angela explored the muddy pavements of Githogoro and Huruma slums.

They walked with us to the Shamba (gardens) in the suburbs of Githogoro slum and went to Karura forest to see bee hives for Huruma women from the Huruma slum.

Later we left for Kiambu County where they visited other women's groups in Limuru and Ndumberi.

The day could not end without meeting the jubilant singing children from Bethsaida Orphanage - a makeshift orphanage in Maziwa, a short distance from Githogoro slum.

“One of the most memorable places for us was the children’s rescue centre which hosts about 300 orphans and vulnerable children from different slums in Nairobi. The children come on a daily basis and are fed and educated for free in the primary school."

The day was short and we had to plan another day for the rural area south of Mtkenya where Tharaka-Nithi lies - an area with diehards of FGM (Female Genital Mutilation).

So, on the 26th December, we set off together on our journey to Tharaka Nithi. On the way, we stopped to see the Knitting Women in Embu County who use their skills to sew clothes and knit sweaters for Children in Embu County. They train other women in the village with sewing and Knitting skills.

After a stop over for an hour, we set off to Tharaka Nithi where Debbie and Angie were met by the anti-FGM women of Igakiramba Mercy Mothers and Wendo Women Mothers' Association. They were able to meet women circumcisers who had now abandoned cutting girls and joined the Anti-FGM Campaign. We were treated with singing and dancing.

Culturally, women sing and dance as a way of showing happiness and a way of appreciating visitors. The women joined the dance with Angela and Debbie, so all of us danced energetically.

It was a time to introduce Debbie and Angela to the women's groups who have partnered with Compassion CBO to fight FGM. A time for speeches followed and every leader, one after the other, spoke out against the FGM vice and for the protection of girl child.

When a girl is cut she becomes 'mature', according to the custom, and is ready for marriage - undermining her capacity to continue with the education. The doctrine of FGM in the area is cemented through the paying of a dowry, where uncut girls are despised and no dowry can be paid for them until the get cut.

Young men don’t marry uncut girls because it is taboo to marry uncut women in the area, according to the tradition. If found, he will face a heavy fine from the elders and be forced to cut the wife. Peer groups will love to scorn him.

FGM is carried out extensively in the area of Tharaka Nithi, unstopped and uncondemed, and looks as if it is the order of the day. This is because, for decades and decades it has being accepted. Tharaka Nithi is a semi-arid area where by water is very scarce. Uncut girls are not allowed to fetch water or bathe with cut girls which means they are isolated and bullied. They have no option but to be cut in order to fit in the society.

"The women and young girls we met, who had stood up to their wider community and elders, were truly admirable.
One young woman told us that she wanted to stay at school, have a career and then choose if and when to marry and have children in her own time....
When we explained that young girls are taken out of the UK by their parents to undergo FGM and even more worrying – circumcisers are practicing in the UK, they were in total shock.
They highlighted a common interest in both countries working together on campaigning and eradicating FGM.”

To the anti-FGM women, Debbie and Angela's visit meant that they are not alone in the fight but that the world had come to them to support them. To show their joy and happiness, the women prepared some snacks which we enjoyed together.

Our time to leave came because it was getting late and 250 kilometers were waiting us to cover on our way home to Nairobi.

But the women could not allow them leave without a Meru new name, so Debbie & Angela got new names. The name meant they now belong to Meru Community and are no longer British. There was an abundance of joy and much dancing and variety of fruits stuffed into the boot of our car.

Bye bye bye, we waved through the mirror, and then set off on a rough road and traveled through the rock-filled road and graced the bush before connecting to a tarmac road that saw us drive for four hours non-stop to Nairobi.

It was time to say goodbye to each other at Nairobi Safari Park Club, where Debbie and Angela were picked by a taxi - with a promise that we will keep communicating through emails.

Being amazed by what women were doing in a simple way, Debbie said she will try to come back again and, if possible, with a group of ladies from the UK to learn and share experience. Two weeks later she emailed Compassion CBO saying she will do her best to see whether she can try to do some fundraising to help fight FGM and help women's projects in Kenya.

Debbie with cheque for Compassion CBO. Photo: UNISON.True to her commitment, this year Debbie proposed Compassion CBO to UNISON - where she works at the Oxfordshire county branch.

Little did she know that among the 17 beneficiaries nominated, Compassion CBO would be chosen. We appeared in a UNISON publication.

A total of £819.46 was raised and the cheque was sent to Compassion CBO.

This all happened while we are celebrating 10 years since the birth of Compassion CBO.

We celebrate Debbie and UNISON as a whole for their contribution toward Compassion CBO to help fight FGM and empower women in Kenya.

This generosity and goodwill has greatly encouraged and motivated us all.

Compassion CBO will be organising seminars throughout the year in Tharaka-Nithi in schools to denounce, degrade, and terminate the culture of FGM.

We have introduced 'Cutting the Ribbon' as an alternative rate of passage where girls cut a red ribbon - symbolic of FGM.

It will take years to end the vice in the vast country and will require local, national and international combined effort to reach that point.

How to Help Compassion CBO

If you are interested in visiting or volunteering with Compassion CBO, please email

If you would like to help Debbie to fundraise for Compassion CBO in the future, please email Debbie at .