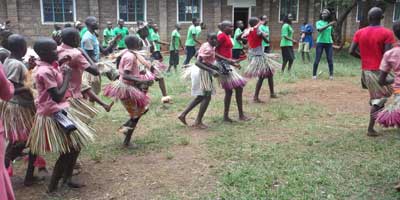 Singing and dancing in Igakiramba

I had been especially keen to attend and report on the anti-FGM [Female Genital Mutilation] seminar run in Igakiramba, Tharaka Nithi, which I was told has the third highest rate of FGM in Kenya.

The seminar is a collaboration between Compassion CBO, Igakiramba Mercy Mothers and Wendo Tharaka Associatin - members of the Compassion Network - and the local Catholic church who are sponsored by St. Peter’s Lifeline from the UK.

This seminar differs from the ones I’ve been involved with previously because the girls are accommodated for a week, taught about FGM, motherhood, their options, health etc. and ends in an alternative rite of passage.

I had really hoped to be able to be there for the whole thing, but unfortunately there has been a lot of violence in the area, so much so that instead of holding the seminar/programme over several days, it stopped and started.

Unfortunately, with all the upheavals I missed the seminar completely, which was disappointing. I had particularly wanted to be there for the ceremony where the girls have red ribbons tied around them which are cut to symbolise their transition to ‘womanhood'.

Attending the Anti-FGM Meeting at Igakiramba

Instead, I was treated to a meeting organised by Elder Kinyua - a Compassion board member who co-ordinates our work in Tharaka Nithi, where Igakiramba Mercy Mothers and Wendo Tharaka Association are based.

Some of the girls who had attended the seminar gathered, together with some of the pupils of Igakarimba Primary School. There was a lot of singing and dancing and we discussed FGM.

It was great to see some boys listening - those who had danced as part of the school party. Although here the sexes sit separately and the boys didn’t seem particularly keen to be there: FGM is seen as women’s issue so I think they were a bit embarrassed to be part of the discussion.  With my usual tact, I decided to address them and tell them that they were part of the problem and were obligated to be part of the solution - but it seemed to go down okay-ish and I got a big laugh from the women present.

There were a couple of especially significant people at the meeting. There was an older woman who was a member of one of the women’s groups and who used to perform FGM in the area. She didn’t speak English and my Swahili is limited so I didn’t get to talk to her personally, but apparently she had been convinced by the other women of the group to stop ‘mutilating’ girls and became a member of the group, to retrain and learn skills to provide herself with an income. I was massively encouraged by that; especially considering that I was told all of the women involved with ending FGM are subject to a lot of abuse and hostility.

There was a girl who looked about 15 years old and had sat with the all the girls who had attended the seminar. They all get T-shirts when they ‘graduate’ from the programme but she was the only one without the lime green apparel.

I later discovered that she hadn’t been reached in time. She had been coerced into undergoing FGM earlier in the year and married off (after being ‘cut’ marriage is the next step, whether or not you are ready for it).

After her marriage, she had become pregnant and, sadly, miscarried. I cannot fathom how hard it must be for someone of her age to go through such trauma so I won’t pretend to understand. Neither will I try to comprehend how difficult it must have been for her to hear Phyllis talking about the negative health aspects of FGM and me going on about making our own choices and owning our own bodies; in some ways, I am glad I didn’t know about her when I was speaking because I don’t know if I would have been able to say anything.

The reason this teenage girl was at the seminar was because, after everything, she had decided that marriage wasn’t for her. So, turning her back on the past, she decided to go back to school and create a new life for herself - taking a massive step in regaining control over her own life and making a hugely courageous decision, in my opinion.

We weren’t able to stay for long – it had taken us well over 4 hours to get there. Evanson [founder of Compassion CBO] and I had left Thindigua at 6 a.m. and we were delayed by traffic in Nairobi, so we reached Igakiramba around mid-day. By 4 p.m. I was flagging (I also had a pretty epic case of sunburn all over my legs and stomach going on, which made me even more inclined to return home to Nairobi. Note to self - ALWAYS take sunscreen when swimming, even if it is the rainy season).

So, with more songs and dancing to see us off, we left. Elder Kinyua drove us to a local town where we could get a matatu [minibus] back to Nairobi - or at least in theory... We waited for three hours for the matatu that was “coming soon” to actually turn up. I lost any level of chill I had, and had a meltdown about the unreliability of Kenyan transport and the dreadful business skills of anyone who allowed four minibuses to deposit their passengers and not pick up new ones, when there was an entire matatu load of people waiting to go to Nairobi. However, being British, this just took the form of chain smoking, muttering under my breath, and looking with utter scorn at anyone who glanced remotely in my direction. I finally got home around 11 p.m. physically and mentally exhausted by the day.

Ndeiya girls proudly displaying their attendance certificatesRaising awareness about FGM is a major part of Compssion's work. We also held an anti-FGM seminar in Ndeiya, which is near Limuru in central Kenya, where 20 girls between the ages of 10 and 17 attended and listened to Phyllis [Compassion CBO board member] and myself explain the dangers of undergoing genital mutilation.

You can read about previous anti-FGM seminars I attended, here:

Ponderings on Culture, Harassment, and Abuse

On a side note:

I spent a bit of time meandering around the Guardian Website today, when I came across one story about the UK woman who went to the police about being hassled by builders on her way to work. Her name was Polly Smart. Many people, of course, say “oh it is a wolf whistle - get over it there are worse things happening." Generally, I am one of those people.

I’ve spent a lot of time recently talking to girls about FGM, which in my opinion is one of the worst violations of a girl’s body that can happen, so why get worked up about someone who isn’t touching you (just to clarify - I don’t think it is a compliment as some would argue). Then my thoughts went off on a tangent, thinking about what I was looking forward to when I got home and I realised that I am really looking forward to a change in wardrobe. As shallow as it is, and I admit I have as much depth as a paddling pool at this precise moment, I am really looking forward to being able to wear what I want when I want. I miss my ridiculously short dresses and shorts, I miss not having to think about the consequences of my wardrobe choices.

Of course here, when I go out with a group of friends I can wear what I want. However, around my home in Thindigua [in Nairobi], I already get a massive amount of attention for being a mzungu and, while I’m used to the fact that if I walk or get a matatu or a bus anywhere people are going to stare, occasionally ‘casually’ find a way to touch my hair when they sit behind me, or yell “mzungu”, “beautiful”, “girl”, “Njeri” or “Wanjiku” [Kikuyu girls’ names] at me; I still find the attnetion very tedious or, if it has been a long day, really rather irritating and don’t want to do anything to draw any more attention to myself.

I know I should should dress “modestly” when culture dictates it, and to a point I agree: I would, and have, worn a head scarf when visiting a mosque; I wouldn’t go into a church without my shoulders and knees covered, ditto the temples I visited in South East Asia; but what happens when the culture is at odds with things I fundamentally believe in - like women’s equality?

Preserving traditional culture is an argument used here to promote FGM and to encourage early marriage, and I’m not going to respect that. I know this goes into the arguments about cultural relativism etc., and the only reason I am thinking about it at all is because I am over-tired, incredibly privileged and being horribly self-indulgent, but I think my point, if I had one, was: a) I miss shorts and b) is ‘culture’ always such a good thing if it means endangering the lives of girls to make them more attractive brides?

This has all got a bit deep and incoherent so will end here. For more news and hopefully fewer philosophical ramblings, tune in next time.