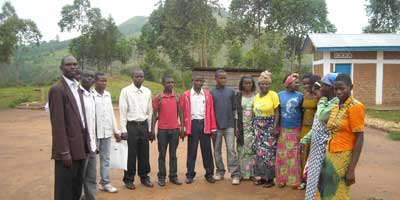 Uniting for Peace and Gender Equality

A Woman is a Bridge

"In the context of some DRC cultures, a woman is also a bridge because she unites two families that are her own and that of her husband."

In recognition of IWD, its members recently met at Cibimbi village, and they included women, girls, and some boys.

As there was no bridge around in the area, the women and men members of COFAPRI stood in a circle hand-in-hand, as a sign of peace, unity, and breaking discrimination that is often directed to women and their daughters.

In the context of some DRC cultures, a woman is also a bridge because she unites two families that are her own and that of her husband. As regards to International Women's Day, the meaning becomes double and strong, because women and men are standing on the bridge.

The members we met belong to one village. We could not dare venture into other villages, as insecurity is prevalent in the area.

The members who were present said that although they belong to one village, they still represent all the women of the world, including the other women of their group who could not descend mountains and join us because insecurity is prevalent in the area.

Peace is Key to Development

Different issues were on their agenda. They discussed issues of peace, unity, development, and gender issues.

For them, peace is key to development. If there is no peace, nothing can work.

They gave an example that if there was peace in the country, all the villages in which they had members could be mobilised for this great day and meet.

In the minds of our members, many heads together can provide a lot of ideas, which can trigger development if these ideas are implemented appropriately. They wished the situation of insecurity be told to the world and end immediately, as it is a strong obstacle to many achievements.

No Justice for Women

Our members reported that in some areas of the province, women and girls are being raped day and night and they are abandoned to fend for themselves.

Others are being ill-treated and segregated in their own homes by their husbands, another sign of insecurity.

The people who rape and discriminate against women and girls have never been taken to justice, though some of them are well known – and the very few of them who are prosecuted are released within few days, and they come back to their village. Such an abuser will be more brutal and aggressive to the victim, as he wants retaliation.

All this because there is the law of impunity.

In the name of all other women in the whole world, COFAPRI members admitted that they need national and international strong support that can trigger and motivate their willingness and their commitment to fighting poverty.

This would help them develop –  and lack of it would hinder development for women, as they are always left behind with the belief that women can’t promote development. These women added that, in the past it was women who managed  their homes' economy, but today, things have changed.

Women should have access to education, formal or informal, for a brighter future. Although they are growing older, they suggested that if their children can be given the chance they have been refused, it would be interesting for the betterment of the coming generations.

This is the reason why these women –  together with some men, are truly committed to working hard ,with our help, to make a step ahead in the context of development.

They encouraged the small financial assistance we are giving them, and they said it is very helpful to them, which can make their future be bright.

The women said that the pigs and the rabbits they are rearing are now growing and will help them in a few months ahead. They encouraged us to  help them understand the role of being united and committed to working hard for the welfare of their families and society. They also wished to see their projects of sewing centres and a big farm become a reality, as this would be beneficial not only to them, but also to the whole community in which they live.

To make this happen in a positive way, peace again is a must; no development can exist without people’s peace and security.

COFAPRI is different from others projects they have always seen in the area,  our members said. Months before the presidential campaigns, many people came in the village to implement projects there, but soon, days after the election, those projects vanished, and today they no longer exist.

The people who came with such projects needed these women’s voices simply for becoming deputies or whatever political promotion.

COFAPRI  has specific objectives for DRC women’s development and to make them understand the importance of durable development in their areas.

Women are the ones who are more involved in making their families live, particularly in the villages where COFAPRI is more focused. Here, you can see a woman carrying hundreds of kg of, wood or any other heavy thing on her back –  often heavier than herself, but this is her contribution to the family’s welfare.

They also go to fetch water or wood, cultivate with kids on their back. Village men can’t help them; their only job is to sip on beer and marry as many wives as they can.

This is one of the many examples that depicts gender imbalance in the DRC. Another example, is that girl children are not being sent to school in villages, but boys are, as there are widespread and unfounded beliefs that boys perform better than girls, and boys can help their families –  even if they are married, but girls do not, because they always depend on men.

Besides, most village women do not work simply because they did not study. Such beliefs should be rooted out to give way to development and gender parity.

Women Can Give Their Best

The women and boys who participated concluded that women and girls should have access to  education and work in order to promote family and social development.

For them, if there is peace and democracy on the land, women can also give of their best to build families and the nation. What is missing is that women and girls are never given chance to show what they know and what they can do.

And finally, they called upon any organization to help them implement their aims for development and claim for their rights.