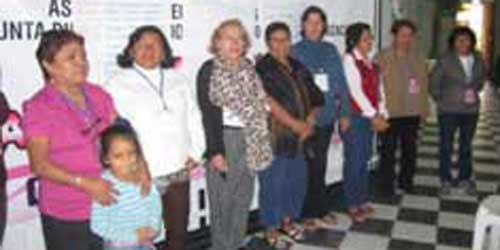 The National Organization of Grassroots Women is the first such grassroots organization that women leaders have formed in Peru and will strengthen their organizations to be empowered as a united force to start the process of advocating to the national and local authorities.

The legal constitution of the organization is a tool the women can use to fight during the processes advocating for land property, housing rights, and against family violence as well.

The number of women participants were 50 in total, and they represented 12 provinces of Peru from the coast, mountains, and jungle of Peru. Also, grassroots women from the 13 districts of Lima were present during the event which lasted for three and a half days.

Each group of women represented their province at the regional level and each district of Lima city.

The women were trained in issues related to the strengthening of the organization and also in productive programmes. The women showed their empowerment through their ablility to implement the strategies and tools they learnt during the training they received.

During the training process, the grassroots women organised in groups of five women; each reflected on the list of questions they need to answer and explain to the other groups.

The women learnt about the aspects of their organization, like what they think are the forces, opportunities, weaknesses and hazards. The workshops had a duration of one hour, and after they finished, each group elected a representative to explain the relevant aspects and findings.

We could see the interest the grassroots women showed in learning how get an organization with women empowered and trained to demand for their rghts to the authorities in general.

Election of the National Organization of the Grassroots Women, Women United for a Better Community

After the 12 grassroots women organizations from provinces of Women United for a Better Community and 13 districts of the city of Lima got the legal constitution of their organization, the women were allowed to act as autonomous organizations at the local level.

The event took place in the city of Lima and all the organizations formed came from the coast, mountains, and jungle of Peru. A number of 50 grassroots women leaders shared their work experiences and explained about the problems they have in their communities. The women have as their objective the approval of laws to defend the land property and housing rights of the land they have occupied for more than 30 and 40 years in some cases.

The grassroots women leaders got the acceptance of the communities after they got the awareness and the empowerement they require to advocate to the authorities for land property and housing rights and confront the family problems they have. The women formed the National Organization in order to be heard by the government at the national level. The leaders set in place procedures to negotiate with local and state authorities.

Dialogue with the local and national authoriti es is important, but it is even more important to get their support. If the authorities do not accept the requirements of the grassroots women, the women will go to out to the streets and march against the injustice they get from the government.

The women will be able to ask for the support of the Parliament (Housing Committee) with the approval of the law proposals they present; for example, against evictions. The women drive strategies and tools created by themselves to advocate for their rights in general to the authorities.

The proposed programme is going to start at the national level as soon as the women have agreed to advocate for the approval of housing politics and family violence.