Brazil: Boy Band on Trial for Gang Rape But Still Free to Play 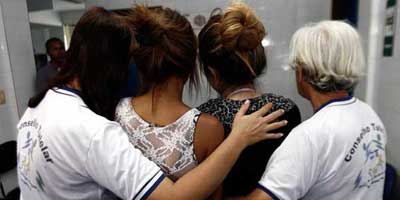 An Invitation to Hell

The Brazilian boy band, New Hit, are on trial for the rape of two girls after their show in the city of Ruy Barbosa, in Bahia,  26th August, 2012.

The two girls – one of them was a 16 year-old and virgin at the time, saw the band's show, and then took photos of them on their phones.

At that moment, one member of the band, William Ricardo de Faria (aka: “Bryan”) called the girls to come into their bus because another group were going on stage, and they had to leave the place.

But when the 16 year-old girls entered the bus, two guys, “Dudu” (Eduardo Martins Daltro) and Alanzinho, put their hands on their bottoms.

The girls did not like it and asked them if they always did that with fans.

The two guys just laughed at that.

When the girls were just taking pictures, Dudu [the lead singer] put again his hand on one girl's bottom; she removed his hand and then he pinched her bottom. Bryan asked the girls to go to the back of the bus because there, the light was better to take pictures.

Dudu asked one girl to sit down and they kissed each other, but she explained to the police that she had not told him that she wanted to have sex or lose her virginity with him.

Some of the guys inclined their seats and turned the lights down.

She said that someone was pulling her hair back to raise her head. Dudu got over her and she screamed, but no one listened because of the sound of other band at the show (they were in a kind of festival).

When the rape finished one person took her off from there. Another person took her to the bathroom and said to her, “You like to fuck with the vocalist” and obliged her to have oral sex.

Where was Her Friend?

She did not know what had happened to her friend that at this moment; she was at the door of the bus ready to get away.

When she was getting away, Alanzinho slapped her bottom and told her to take the morning-after [contraceptive] pill.

Her friend (the other girl) said she was forced into the bathroom to be raped - two guys came in and raped her; when they finished, two more guys entered there.

The girls looked for the police when they were able to, and the military Vanderlúcia Miranda said that the girls were very afraid. One of the girls fainted.

They were in shock.

The other military personnel arrested the boy band.

The band was formally accused and is now facing judgment [sentencing] for the rapes.

They can be jailed for 6 to 10 years, but…at this moment they are free and performing in shows all over Brazil.

Some women's movements are protesting every time they know this band will appear at a show. They got some shows cancelled, but they are still working.

In the clothes of the victims semen was found (from various men –  and also, from more than two men).

The mother of one of the girls said that all her family was receiving threats; they received phone calls saying that the girls would be murdered.

Brags From Manager of Band

The manager of the boy band, Sacramento, just said, “What is a bad thing is going to turn out good. We (the band) are going to be known in the whole of Brazil”.

"Our greatest outrage is against the judge of the Court of Justice, which freed the rapists after 38 days in jail. While they are free, presenting themselves in shows, the victims are threatened, filled with traumas, in protection programs for victims, " responded Ms Luiza Maia of Partido do Trabalhador/PT [political party].