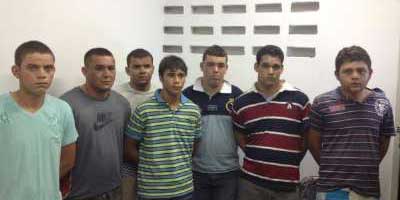 Five Women Were Gang-Raped as a 'Birthday Gift' in Brazil. And two Murdered....

Last year, on 14th February, 2012 - Valentines Day, a group of men raped five women and murdered two of them in a city called Queimados, in Paraíba, a Brazilian state in the north of Brazil.

The police arrested 10 men, including three teenagers, for this crime.  The women were raped as a birthday “gift” to one of the men, in a house in the downtown area. There were 15 people inside the house.

The crime shocked the 40,000 people of Queimados.

The first version of the crime by testimonies described five men who entered into the house, tied and locked all the men into a room and then raped the five women. But in the beginning of the investigations, police doubted the participation of the two owners of the house.

They were arrested at [one of] their victim's funeral.

The crime was premeditated by two men, the brothers Eduardo and Luciano dos Santos Pereira.

The women’s rape was a “birthday gift” from Eduardo to Luciano, who recently returned from Rio de Janeiro.

They bought all the materials from a supermarket to tie up the victims, and gave the materials to the three teenagers. Then both men stuck with their plan and called the victims to celebrate Luciano’s birthday party. All the men who were at the party knew about the plan.

Secondly, according to the police, Eduardo and Luciano arranged with six other men to pretend an invasion into the house and rape the women.  “At the moment of this fake invasion in the house, the two brothers pretended to be locked into a room, but what happened was that the six men just dominated the victims for Eduardo, Luciano and a third man, known as Papinha (Fernando de França Júnior) raped them”, said the police delegate, Cassandra Duarte.

Jussara Frazão Isabela Monteiro, 27, and Michele Domingos da Silva, 29 years old. Photo: Rádio cirandeiraCassandra said that both murdered women were friends of the brothers. They are Michele Domingos da Silva (29 years old) and Isabela Pajussara Frazão Monteiro (27 years old). They died because Michele's blindfold loosened, and so she was able to identify the criminals. And Isabela was by her side at that moment, so she heard Michele’s words saying the brothers' names.

Michele was murdered near a church by gunshots, after she tried to escape from a brother’s car in motion; she died in her way to the hospital. Isabela was found totally naked, with hands and feet tied, a sock into her mouth and a band over her eyes, on the route near the city.

The Wives of the Brothers Spared

Only the wives of the brothers were not raped at the party. Cassandra Duarte explained that they were hostages and put into a bathroom. They did not know about the rapes –  they thought it was a “common” assault, so they were victims too, Duarte said.