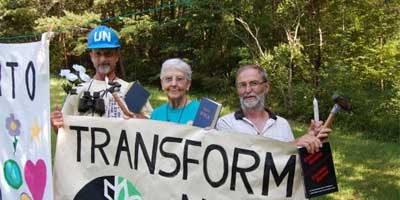 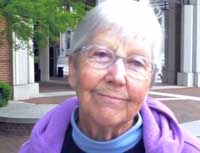 Photo: WebProNews Sister Megan Rice, an 83-year-old nun, has been convicted for her participation in a break-in protest at a nuclear facility in Tennessee, USA last July.

According to a BBC News report, Sister Megan Rice and two other protesters, Michael Walli and Greg Boertje-Obed, were convicted of sabotage and depredation of government property. The trio cut a fence and broke into the Y-12 facility in Oak Ridge, Tennessee, which processes and stores uranium for use in nuclear weapons. They threw baby bottles filled with human blood onto the walls of the facility.

The protesters are part of a group called Transform Now Plowshares. The group issued a statement in conjunction with the protest, stating that the facility is “an ongoing criminal endeavor in violation of international al treaty law…” From a separate statement:

We come to the Y-12 facility because our very humanity rejects the designs of nuclearism, empire and war. Our faith in love and nonviolence encourages us to believe that our activity here is necessary; that we come to invite transformation, undo the past and present work of Y-12; disarm and end any further efforts to increase the Y-12 capacity for an economy and social structure based upon war-making and empire-building.

Sister Rice is well-known for her anti-war activism. According to a New York Times feature on Rice published in August 2012, she has been arrested “40 or 50 times” for civil disobedience.

Rice and her fellow protesters now face up to 20 years in prison for what authorities believe is one of the most serious U.S. nuclear facility security breaches in history.

The BBC reports that: Sister Megan said she only regretted having waited 70 years to take action...

Sister Megan said her only regret was waiting so long to stage her protest. "It is manufacturing that which can only cause death," she said.

In a statement to the court, Boertje-Obed said: "Nuclear weapons do not provide security. Our actions were providing real security and exposing false security."

Walli and Boertje-Obed, a house painter, testified in their own defence, telling jurors they had no remorse for their actions.

Sister Megan stood and smiled as the verdict was read out at a court in Knoxville, Tennessee. Supporters in the courtroom gasped and wept and sang a hymn as the judge left.

According to The Raw Story: 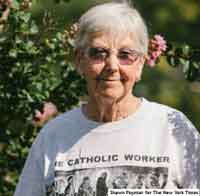 Photo: Spirituality and PracticeDepleted uranium munitions like the kind stored at the facility Sister Rice targeted are blamed for some of the worst birth defects and soaring cancer rates seen in post-war Iraq, particularly in the city of Fallujah following the siege of 2004, in which U.S. soldiers killed thousands of civilians.

The city has never recovered, particularly from the use of depleted uranium munitions, and to this day residents suffer from health effects “worse” than those seen following the nuclear detonations at Hiroshima and Nagasaki, according to a study by the International Journal of Environmental Research and Public Health.

“I believe we are all equally responsible to stop a known crime,” Sister Rice said from the witness stand, according to quotes published by her group. She called herself a “citizen of the world”.