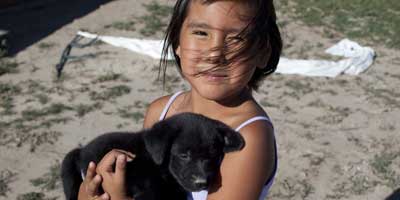 Interview with filmmaker, Kitty Farmer, on her work with Donald Warne, MD, MPH, Oglala Lakota - his master vision to change forever the health and healthcare of the Lakota People - and all American Indians, through the newly-created Medicine Wheel Foundation

“I’m going to lose my vision.”

It was not a call for sympathy as filmmaker Kitty Farmer remembers it. It was said plainly, as a simple matter of fact. Gerald One Feather, a highly revered member of the Oglala Lakota tribe, was resigned to losing his sight. There was no money to save it with.

Kitty Farmer filmed Gerald One Feather, as well other members of the Oglala Lakota, as they reflected on the sorrowful state of Indian healthcare in her documentary What’s in the Heart.

Donald Warne“As an example in North Dakota, American Indians have twice the rate of diabetes as the non-Indian population, but we have six times the death rate,” explains Donald Warne, a Harvard- and Stanford-trained doctor hailing from the Oglala Lakota tribe, in Farmer’s film.

“So what that’s tells us is that even though we are getting things like diabetes at a higher rate, we are dying of those diseases at an even higher rate than the rest of the population. From my perspective, that really is reflective of an inadequate and under-resourced health system....

“It’s not a lack of resources on behalf of this government; it’s a lack of priority. Perhaps if we made automobiles or sold financial derivatives, we’d be important enough. But in truth, we are dying because of a lack of resources,” says Dr. Warne in the film.

It was this health crisis that inspired Farmer to leave her job in the publishing world almost eight years ago. Dr. Warne, Farmer’s friend of 12 years, approached her with his mission to bring awareness to the healthcare needs of American Indians.

Inspired, she decided to shoot What’s in the Heart, a project she still considers incomplete. But Farmer is no longer satisfied with merely filming.

Looking to the future, she is raising money to build a sustainable building for the Oglaka Lakota Healthy Start programme, where at-risk mothers and their babies can receive support and health counseling.

What is the aim of the film?

"This film has to be positive. We don’t want to bludgeon the white person and have them run out of the back of the theatre. But we’re not going to avoid telling the truth. That’s a very delicate line to walk. In highlighting these remarkable people who are very resilient in the face of all the traumas, I think people will want to help."

So the film is about giving a voice to the Lakota?

"Yes. I talked to my friend, Don Warne, who is both a physician and a medicine man, and he warned me. He said, “Kitty. Be careful. You can really upset a lot of people by acting as an authority.

I have the utmost respect for those who have been so kind and patient to teach me. But I am by no means an expert. I’ve just been privileged to be a witness to so many remarkable people."

Do you think that American Indians are misunderstood, and is there hope?

I would stand there and tell them about my film. Two things happened. Their heart would either break open, and they would say, “Can I help?” Or they would sort of back up...

It’s lack of education. For many people, Indians are about art and jewelry. Santa Fe has the Indian market, which is the largest Indian market in the world, and our little airport is wall-to-wall with jets as wealthy people come in early to get the plum objects. Try mentioning that the people making art are sick and see the looks one would get. Sadly, many people simply do not know due to our 'white-washed' education system.

It’s a friendly universe. You just have to dig around. A lot of people really do care about the American Indians, but sadly, more don’t. That’s our task. It’s to educate them."

Why do you believe the American government has not provided adequate healthcare to American Indians?

You have so many Senators who don’t have Indian constituents in their states, so it's not in their best interest to care. That’s part of the problem. They justify not funding IHS [Indian Health Service] because we don’t have enough money, because we’re always funding war. And as Don [Warne] said, “They may not be killing us with bullets or burning our teepees, but they’re killing us with the stroke of a pen...”

But you also have shining examples like [former U.S. Senator] Byron Dorgan. He is fierce... His press secretary told me that his father took Byron out to reservations to see first-hand the squalor...Those were early influences, and he became a really fine human being."

How have you learnt about the American Indians’ healthcare system?

"It’s taken me this long to get my arms around the subject matter. I had to study Indian law and trust responsibility, as well as seeing first-hand the suffering."

What are your goals for the Medicine Wheel Foundation?

Natalie White Plume, Lakota and baby Angelina. All 5 of Natalie's babies have been Healthy Start babies. Photo by Deanne Fitzmaurice"My dream goal is for these [American Indian] babies to be born into Healthy Start-type programs and then pivot in fifth grade into the evidence-based, teen prevention programme, National Indian Youth Leadership Project (NIYLP). It’s all positive leadership training based on experiential learning, whether that’s chopping firewood for elders or taking their oral histories.  NIYLP kids are forces of nature and their programme is not only saving youth, but they actually become 'forces of nature'.

Dr. Warne's vision for an Indian medical school and a better healthcare system will happen.

I may not be alive when it’s complete, but I want to see that my life is all about laying as many seeds as possible, and I see it through [programs like] Healthy Start. I’m really empowered to raise the money to get the building built."

Why have you decided to focus on women?

"I just decided to pull back and focus on women and children. I just think that’s the biggest bang for the buck. We’ve got to start with prenatal care. We’ve got to empower the mommies. How can a mommy be a good parent if she’s depressed? She can’t.

I want to educate people to empower and nurture native women, because the Lakota is traditionally a matriarchal lineage. The final word always rests with the women."

Could you explain more about the role of Oglala women, then and now?

"Historically, the women set up the teepee, took the teepee down, kept the teepee clean, kept the buffalo cooked, and tanned [buffalo hides]. She did everything. While the men ran things, the women had the last say.

You fast-forward to today, with all this despair and poverty. How on earth can that woman still be respected? There are pockets where families have stayed intact, and they do the Sun Dance, and the woman is revered. But there also was this huge patriarchal surge because some mirrored the oppressor, which was the US military and government officials."

What would you say is the biggest challenge for American Indian women?

"Depression. People become immobile. If you’re living on Pine Ridge in a house that’s too cold or hot, and you don’t have any food to eat, and you have no job opportunities, and you're surrounded by hopelessness and despair - well, that’s going to lead to depression."

What do you think is the reason that American Indian women are subject to high rates of abuse?

"When you had [colonists’] patriarchy come marching in, where did the [American Indian] men look to for role models? It became the BIA [Bureau of Indian Affairs]. And then they went to boarding schools where they had abusive priests and abusive masters. These kids were not parented...

It was trauma upon trauma, loss upon loss. Men who can’t provide for their families become demoralized and depressed, so they take to drink and drugs. Along with drink and drugs comes violence. That internalized oppression kicks in and there’s such despair that they begin taking their rage and despair out on those who look most like them, their wives and children. This phenomenon surfaces on many levels - family, government, societel. It didn't used to be that way. This is out of sheer historical trauma. Desperation."

The film documents the shockingly high rate of teen suicide on the reservations. What do you feel are the causes?

The young people on Pine Ridge—it’s paradoxical. There’s one group that is very much into tradition. And they participate in the Chief Big Foot Memorial Ride, retracing Big Foot’s steps over a couple of weeks in the coldest part of the winter. These young people are determined not to forget what happened to their ancestors but connect with their suffering. It’s beautiful.

However, there are many that are just completely falling through the cracks. They get together and practice suicide and commit suicide..."

Can you explain ways in which specific indigenous adult medical problems are linked to prenatal care?

"You have the historical trauma, which is an actual physiological post-traumatic stress response that is cumulative from generation to generation, already on-board the developing fetus.

The [baby’s] little brain is responsible for the liver and the kidney and the heart to develop. If the micronutrients aren’t in the mommy’s diet, that brain becomes frantic. “I’m not doing my job. What am I going to do? Those kidneys don’t have enough nutrients...”

When you see a 600 pound Native person and you go, “Oh, he should quit eating junk food.” No, no, no. That is a brain that did not have proper nutrition when developing. There are a myriad of reasons for obesity."

What challenges have you encountered in your work?

It’s been a privilege. I couldn’t walk away from it if my life depended on it. It’s drained my savings to create this film, but I'm very excited to be working with the Healthy Start Projects and hope to see a new building on every reservation. As a native person said to me, “Kitty, quit worrying so much. This isn’t your project. This is God’s.”"

What's in the Heart - Can't be Taken looks at the history and reasons for the alarming health crisis among Native Americans. The film traces the life of a 14-year old Lakota boy who survived the 1890 Wounded Knee Massacre, and went on to forge a life based on forgiving “those who had done that to him.” Through the boy’s story, interviews with his great-grandson, health experts and community leaders, the film will illustrate how one community is using both traditional and modern medicine to heal from its past and the myriad of losses suffered since the onset of reservation life.

The Oglala Lakota are one of 564 federally recognized indigenous tribes that the United States government provides healthcare to.

Given an Indian Health Service often described as underfunded, the broad health disparities between Indians and non-Indians have persisted since colonial times.

For the indigenous tribes of North America, 19th century treaties promised health services in exchange for Native land. For the U.S. government, however, its Indian Health Service (IHS) is merely a product of moral obligation. Federal money for IHS is therefore discretionary.

The Oglala Lakota report a life expectancy on their reservation on par with that of Haiti—a full 25 years less than the average American’s lifespan. Half of adults over age 40 suffer from diabetes.

And on the Oglala Lakota’s Pine Ridge Reservation in lower South Dakota, the statistics are even grimmer. Pine Ridge includes the third poorest county in the nation. Amid the poverty come onerous health conditions.