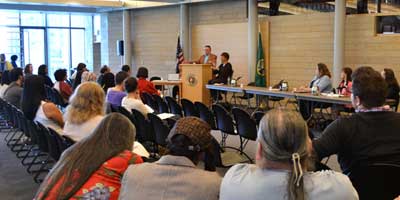 As the US Congress prepares to take its recess, its two houses remain divided over the Violence Against Women Act and, in particular, a section expanding protection for Native Americans and Alaska Natives. Partisan politics are aggravating already-high stakes: after all, one in three indigenous women will be raped in her lifetime.

From Consensus to Controversy

On April 26 2012, the United States Senate voted to reauthorize the Violence Against Women Act (VAWA). Less than a month later, the U.S. House of Representatives followed suit.

Normally it would be as easy as that. After all, VAWA reauthorization had effortlessly passed Congress twice before—once in 2000 and again in 2005 —with bipartisan support.

And what was not to love?

Enacted in 1994, the original Violence Against Women Act was created to protect women against domestic violence, sexual assault, and stalking. The Act strengthened penalties for sex offenders, closed loopholes in protection laws, and allotted funds for prevention education and victims’ support.

Yet 2012 would mark a shift in VAWA history. As Republicans and Democrats jockey for voters’ support in the upcoming Presidential election, rhetoric decrying a supposed “war on women” has caused increased polarization between political parties.

Accordingly, support for renewing the Violence Against Women Act has split along party lines. Democrats favor more expansive measures to protect women, while Republicans generally are reluctant to expand the bill’s scope.

The Republican-leaning House of Representatives answered with their own version of the reauthorization bill, H.R. 4970. Wiped from this new version were the provisions added by the Senate.

Senior advisers from Barack Obama’s administration have already recommended a veto, should H.R. 4970 reach the President’s desk. In regards to the missing provisions regarding Native Americans, a White House statement says “these omissions in H.R. 4970 are unacceptable.”

The VAWA reauthorization bill currently lies in political limbo, stagnating as negotiators from the House and Senate attempt to concoct a version both Congressional houses can agree on.

Nevertheless, advocates for Native Americans and Alaskan Natives hope that the provisions in the Senate’s bill might one day help curb the high rates of violence against indigenous women.

In many respects, violence against women impacts America’s indigenous population more than any other racial group. Some experts theorize that the victimization of women reflects the victimization of the entire Native American population, at the hands of paternalistic colonial societies whose influence is still felt today.

Statistics seem to confirm Native American exceptionalism, with regards to domestic abuse and sexual violence. Women across all races are more likely to be victimized by close relations rather than strangers. With indigenous women, however, the rate of violence at the hands of intimate partners is more than double that of other races.

Data in the National Crime Victimization Survey (NCVS), from 1992 to 2005, shows that domestic partner violence—including but not limited to assault, rape, and robbery—is at the highest rate among American Indians. 18.2 percent report this kind of violence, as opposed to only 8.2 percent of African Americans, or 6.3 percent of white Americans.

In the realm of sexual violence alone, Native American women still surpassed their counterparts in other races. From 1995 to 1996, the National Violence Against Women Survey (NVAWS) polled 8,000 women in the United States about their experience with rape and stalking.

The same survey also found that 17 percent of indigenous women were stalked during their lifetime—a percentage more than double that of any other race.

Since the United States is a relatively large country, with a diverse Indian population, statistics for individual tribes can vary significantly. In Alaska, for instance, the native population represents only 15.2 percent of the overall population, but shockingly, 50 percent of domestic violence victims and 61 percent of sexual assault victims are Alaska Natives, according to a 2010 report.

A specific look at the Athabaskan people of Alaska is even more alarming. About two-thirds of its women have suffered intimate partner assault over their lifetimes, with 18 percent reporting physical assault as recently as the past year.

It is partly this endemic violence among Native American women that has prompted the Senate to pass its revised authorization of the Violence Against Women Act.

One of its most controversial amendments is Section 904 of the bill. In this section, the Senate proposes that a “participating tribe may exercise special domestic violence criminal jurisdiction over a defendant for criminal conduct,” provided that the case directly involves Indian country, or a Native American person.

The question of jurisdiction, however, is a thorny one for Native Americans. Their reservations are neither states nor extra-national entities. They are sovereign nations that are held as dependents by the United States federal government.

As sovereign entities, many tribes have their own police and court systems.

As of 2008, American tribes ran 178 law enforcement agencies, plus an extra forty-two agencies directed by the Bureau of Indian Affairs. Among the tribes that responded to the 2002 Census, 59 percent reported having their own judicial system.

Republicans in the House of Representatives worry that this expansion of tribal jurisdiction could violate the Constitutional rights of non-Indian defendants. One Republican Senator, Arizona’s Jon Kyl, argues that, since membership to tribal government is restricted “on account of race,” its jurisdiction should similarly be restricted.

For Kyl, prosecuting a non-Indian in a judicial system run by Native Americans would violate the defendant’s right to Equal Protection and Due Process, under the 14th Amendment of the Constitution.

Democrats are quick to point out that the Senate bill guarantees, “rights whose protection is necessary under the Constitution,” in spite of suggestions otherwise. In other words, the Constitution reigns supreme, even in tribal court.

Additionally, even a tribal jury must be composed of a random cross-section of the community, just like any American court. Therefore, juror composition is not restricted to Native Americans.

The Senate hopes, by allowing the tribal courts to prosecute even non-Indians, that more Indian women will be willing to pursue justice against their attackers. Native American women are often restricted by geographical and cultural barriers, so this expanded jurisdiction within the community may make justice more readily available.

Furthermore, prosecuting non-Indians allows tribal courts to cater towards criminal trends in Indian populations. In the U.S., most rapes and sexual assaults are perpetrated by attackers of the same race as the victim. Native Americans buck this trend. Data suggests that indigenous women are more likely to be victimized by white offenders, who might live within their community, rather than members of their own race.

The Senate continues to push for its version of the Violence Against Women Act, hoping to combat House Republicans’ accusations of unconstitutionality, with evidence for the need to expand tribal jurisdiction to non-Indian defendants.

Yet, the issue of Native American rights is simply one of many controversies negotiators from the House and Senate have to iron out before the bill can become law.

The first Violence Against Women Act made impressive strides in Native American communities, by sponsoring training for tribal officers and prosecutors. Now, activists hope that tribal justice systems will again see the benefit of VAWA legislation in their continuing fight against domestic and sexual violence.