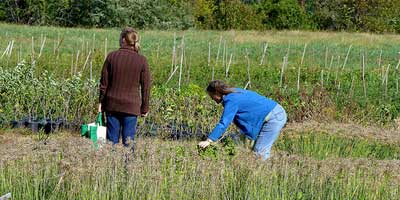 Temperatures are rising. Forecast models show low-lying coastal states submerged in ocean waters. Even a former vice president took to the silver screen to denounce the horrors of impeding climate change in the documentary, An Inconvenient Truth. Yet, even as the latest U.N. environmental summit-- the Rio+20 conference,  prepares to discuss our warming planet, climate change seems like a distant dream to many Americans.

In fact, only 40 % of Americans are even concerned or alarmed by the prospect of global warming.

But as the second biggest contributor of carbon dioxide emissions and a holdout to the Kyoto Protocol, the United States has a special responsibility to help fight climate change domestically. And American women have increasing power to impact such a movement—an important power, since they might be especially affected.

When looking for solutions to the American emission dilemma, many often look to the United States’ iconic “amber waves of grain” and cowboy cattle culture. Agriculture accounts for 14 % of the global greenhouse gas emissions, and in the United States, farming and related activities directly produce 6-8% of the country’s emissions. Fertilizers and large-scale livestock businesses produce the most of these emissions.

So where do women fit into this picture?

Though agriculture in the United States remains a male-dominated industry, women are increasingly making America’s fields and pastures their workplace. Today, about 14% of the U.S.’s farms are managed by women, a dramatic leap compared with the 1980s when only 5% were run by women. And this number is rising quickly—since 2002, the number of women-led farms has jumped by 30%. This means women will hold increasing sway in how the agriculture industry affects and is affected by climate change.

On the whole, American women’s farms are inclined to be smaller and more specialized, which is both a boon and a risk to individual farmers when facing global warming.

While crops can benefit from slightly warmer temperatures and slightly higher levels of carbon dioxide, large increases in either of these inhibits healthy agricultural production. Plants also are generally susceptible to heightened ozone levels and flooding. Farm animals are no less affected by climate change. Heat waves in the Midwestern United States have killed up to 5,000 head of cattle in a single year.

Most of the 300,000 women-run farms – being small enterprises,  present a stark contrast to large-scale agriculture. Such industrial agriculture contributes far more greenhouse gases than their smaller counterparts. In today’s global agricultural market, large enterprises tend to deplete soil carbon and use synthetic fertilizers, practices that release carbon and nitrous oxide. In addition, the average food product must travel 1,200 miles before being consumed. In comparison, many female-directed farms target local, organic food markets, thereby reducing the amount of greenhouse gas released both in production and transportation.

Unless climate change is checked, climbing temperatures are expected to produce extreme weather patterns, including stronger hurricanes, droughts, and heavier rainstorms. Tropical storms, for example, strengthen into hurricanes by passing through warm waters. The United States, unfortunately, became the model for the effects of a super-sized storm on an industrialized nation when in 2005, Hurricane Katrina made landfall along the Gulf of Mexico coast.

The World Health Organization looked to Hurricane Katrina when compiling information for a pamphlet entitled, “Gender, Climate Change, and Health.” While Hurricane Katrina cannot definitively be associated with climate change, it provided the World Health Organization with a chance to examine studies of mood and anxiety disorders that may arise from similar extreme weather patterns. Among Katrina victims, the incidence of these mental disorders was linked to factors like being a woman, as well as unemployment, youth, and low educational attainment.

Hurricane Katrina can also illustrate how the impoverished are disproportionately affected by violent weather. As was the case with Katrina, poorer communities often do not have the resources to avoid or combat the effects of extreme meteorological events. Women in the U.S. are at particular risk, representing more of the population below the poverty line.

In 2007, 13.8% of American women, compared to 11% of men, were considered poor. Also, poverty rates among women increase particularly during childbearing years and old age –  periods of vulnerability.

In terms of general health, however, women should not be painted as the sole victims of these vicious storms. The World Health Organization points to a study positing that, in countries where women’s status is equal or close to that of men’s—like in the United States—natural disasters tend to claim men and women as victims equally.

Social norms, however, often differentiate how the genders are expected to react in these situations, and it often falls to the woman to tend to family members’ health as well her own.

The rise in pollution levels resulting from gas emissions, and the changing weather patterns that result from trapped atmospheric heat, both pose a number of health concerns to women. But in addition to these, women often bear the burden of taking care of the family’s health concerns as well. The United States counts approximately five million stay-at-home moms among its citizens, and these women find themselves in the sometimes stressful position of caring for some of the most vulnerable members of society.

Global warming by name threatens to heighten the number of heat-related fatalities and complications—and children are often the first victims. From a physical standpoint, children process fluids more quickly, putting them at risk for dehydration, and their smaller, more compact bodies put them at greater risk for heat-related illnesses. Their actions also incline them to suffer from excessive heat. Children who play around outside may not be as aware of their own exhaustion or dehydration –  their well-being therefore becoming the responsibility of a parent or caretaker.

Women can also find themselves at the mercy of rising temperatures; pregnant mothers, aside from worrying about hydration, can put their fetus at risk if their core body temperature increases, especially during the first trimester.

Many European studies also show that women in general are more at risk for dying in heat waves, though social factors complicate these findings. For example, in the Chicago heat wave of 1995, more elderly men died than women, due in part to social isolation, marriage rates, and outdoor activity.

Women More Likely to be Environmentally-Conscious

Women in the United States seem especially well-poised to act on climate change, due to their seemingly heightened awareness of the issue.

Research reported by the Organisation for Economic Co-operation and Development (OECD pointed out that 80% of consumer decisions were dictated by women. Furthermore, women appear to be more sustainable as consumers; in general, they recycle, buy organic products, and value energy efficiency in transportation more than men.

In addition, a study published in the journal Population & Environment, concluded that 37% of women surveyed believed that climate change would alter their lifestyles—as opposed to only 28% of men.

Research done on a national level confirms the idea that women may be more eco-conscious than men. Surveys commissioned by the advocacy marketing firm Tiller, LLC, show that women feel guiltier than men about not practicing an eco-friendly lifestyle.

Plus, women tend to be more firm in incorporating sustainability into their lives, by a ratio of 52% to 33% compared with men.

With environmental issues becoming an increasing concern among women, there is hope that education about climate change could spread across the nation.