The women who help the 'cargo trains' migrants 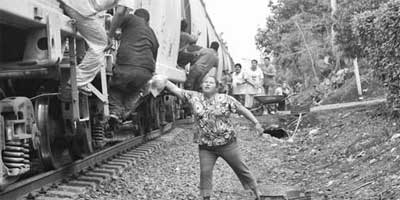 For seventeen years, a group of women in La Patrona, Veracruz, has been handing out food and water to Central American migrants riding cargo trains north in search of work.

Their story began in February, 1995 when two sisters, Bernarda Romero Vázquez and Rosa Romero Vázquez, were standing with their groceries at a train crossing in the village, waiting for the train to pass.  Migrants on the first train car began shouting, “Madre, I’m hungry.”

The shout was picked up by people on the second car.  When shouts came from a third car, the women tossed them their food. “It’s bad,"reflects Bernarda "that, here we have beans, tortillas and a cup of coffee, and they have nothing.” Soon after, Bernarda and Rosa met with their parents and other siblings and the family decided to hand out food and water to migrants.  The women, who have come to be known as Las Patronas, haven’t missed a day in seventeen years.

“(Before,) we didn’t know that migration existed. We thought that they were Mexicans who were venturing to see all of our country,"says Norma, another Romero Vázquez sister.

The migrants are coming mainly from Guatemala, Honduras and Salvador, with a few from Nicaragua.  Most are hoping to make it to the US to find work but first they must make it through Mexico, where they risk being robbed, beaten, kidnapped, murdered.  The passage through La Patrona is one of the few bright spots on their trip. 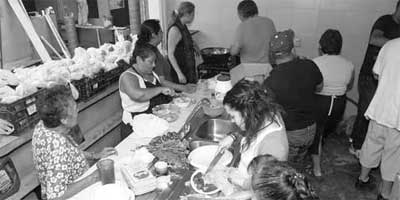 There are currently fifteen women in Las Patronas and they’re all volunteers.  They begin cooking about 9:30 in the morning and finish their work around 9:00 at night.  In the beginning, the women donated all the food and cooked it in their individual houses.  Now, they get much of the food donated and work together in a large kitchen built on land donated by Crisoforo Romero Arragan, Bernarda and Rosa’s father.

Norma, Bernarda and Rosa's mother, Leonila Vázquez Alvizar, pictured above, and two other of their sisters are also Patronas. “The poor people...all of them say, 'Madre, madre, thank you,'" Leonila says. "This is the satisfaction that we keep in our hearts. They give us thanks.” 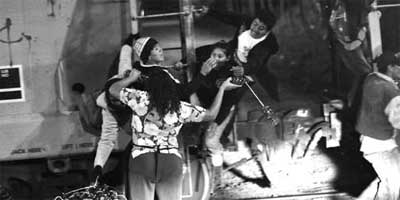 The Patronas tie bottles of water together with a piece of rope, and migrants grab them from the trains as they pass.

The trains have no set schedule.  Some days, only one train passes by.  Other days, it may be as many as three.  The women meet every one. They don't get paid in money but, Norma says, “I believe that the best payment that we get is the blessings of all these people who pass through.”

Las Patronas’ website is www.lapatrona.org.mx but is still under construction.

Joseph Sorrentino is a writer and photographer based in Rochester, NY, and has been documenting the ongoing crisis in rural Mexico since 2003.

For more images of Las Patronas, go to www.sorrentinophotography.com