Dignity and rights – a deserved legacy for African American women 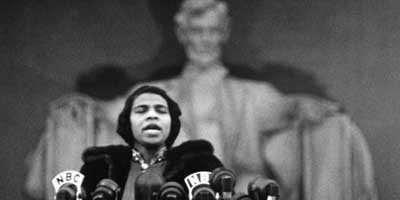 In 1939, African American singer Marion Anderson sang on the steps of the Lincoln Memorial before a crowd of 75,000 in Washington, D.C. Image: NBC newsreel

(WNN) California, U.S.: Every year during the month of February, Black History Month is celebrated in United States.  The theme this year for 2012 was “Black women in American culture and history” because African American women have played a critical, and under-recognized, role of the making of the United States.

Barbara Jordan once wrote: “`We the people’; it is a very eloquent beginning. But when the Constitution of the United States was completed on the seventeenth of September, 1787, I was not included in that `We the people.’”  The struggles of African American women for inclusion and gender equality, against both racism and sexism, have contributed to the discourse of gender equality and the history of the country.

2012 is the second time that Black History Month has brought focus and light to the contribution of African American Women.  In 1996, the observance of Black History Month was also focused on the strides made by black women.   From Sojourner Truth’s inspiring words; to Mary McLeod Bethune’s speeches; to the contemporary novels of Nobel laureate Toni Morrison, along with Barbara Jordan and Maya Angelo, the voices of African American women have raised our consciousness to the burdens of racism and sexism as they educate and inspire not only the women of color in U.S. but many thousands of women who live in global South who are also working today in their plight for equality, justice and inclusion.

Women like Rosa Parks and Harriet Tubman took a risk to change the world and make it a better place and they did it in the face of racial and gender discrimination.  These known and unknown ‘she’roes and agents of change have fought extraordinary battles for human rights, social, economic and political empowerment that has lit the path for other women.

Pioneer black women activists contributed to the women’s movement in the United State during the rise of women.  Pauli Murray, the brilliant and distinguished scholar, writer, lecturer, and in later in life the first woman to become a Episcopalian minister, was one of the first feminist black women who contributed to the feminist movement in U.S. Pauli was instrumental in the founding of the National Organization of Women.

Aileen Hernandez, whom I have the pleasure and honor to know through her leadership at Women’s Intercultural Network, is a community leader and political organizer who has never ceased struggling for racial and gender equality.   Aileen was the first woman on the U.S. Equal Employment Opportunities Commission where she experienced discrimination against women of all colors.

From behind the scenes she urged Betty Friedan and others to start an NAACP for women. She was NOW’s first Executive Vice President and in 1970 was the second national president after Friedan.  During Black History Month, and every day of the year, we shall honor those who came before us and paved the way for the accomplishments that black women, and all women of color, have accomplished.

As in the words of Carol Moseley Braun, they were brave “not to let others define them.”

While the struggle of African Americans has a much longer history, the tradition of Black History Month goes back to the beginning of the 20th Century.  Historian and educator Carter G. Woodson originally founded “Negro History Week” in 1926 at a time when most history books simply omitted any African-American history or shared the central role African-Americans played in the birth of the U.S.A. as we know it. Woodson chose February because it coincided with the birthdays of two men who fought for the freedom of American slaves: Abraham Lincoln and Frederick Douglass.

It was Elizabeth Jennings Graham 1854 defiance of a streetcar conductor’s order to leave his car that helped desegregate public transit in New York City.

During the civil rights movement, Septima Poinsette Clark, who often called the “queen mother” of civil rights, was an educator and National Association for the Advancement of Colored People activist decades before the nation’s attention turned to racial equality.

Sharecropper Fannie Lou Hamer was beaten and jailed in 1962 for trying to register to vote. Eventually she co-founded the Mississippi Freedom Democratic Party and spoke at the 1964 Democratic National Convention.

Vivian Malone Jones, against all odds, enrolled in the University of Alabama in 1963 and later worked in the civil rights division of the U.S. Justice Department.

During the 1920s and 1930s African Americans moved to the State of New York from all over the U.S. as it was one of the few states without school segregation. They moved there to find dignity and in order get their education.

Harlem became known for its African population, and from that context, it blossomed into the Harlem Renaissance movement with creativity in music, art, and writing. This marked the first time in American history that the white mainstream took notice of the creative talents of black America and women especially expanded their influence by speaking to not only racial discrimination, but also gender issues.

Pioneer and talented African American women like Marian Anderson, who was born in 1897 in Philadelphia, became a singer and soloist who began performing at Carnegie Hall by the time she was a teenager. She became widely acclaimed all over the world, but in 1939 was denied the use of the Constitution Hall in Washington, D.C. by the Daughters of the American Revolution (DAR) because she was black.

Anderson got the support of First Lady Eleanor Roosevelt who promptly resigned from the DAR making Anderson a prominent player in the struggle for racial equality and bringing women into the plight.

“When I sing… I want them to see my soul… and that it is colorless,” said Anderson to the press.

In 1955 she became the first black person to perform as part of the Metropolitan Opera in New York City. From 1957-1958, she even served as a Goodwill Ambassador for the U.S. State Department, later singing at the presidential inaugurations for both Eisenhower and Kennedy.

The stories of the life and struggle, contributions and strides of black women to the history and culture of the United States is a chapter of the history of this country that has more unwritten pages than written.  May the future generations of black women keep moving forward in the tradition and struggle of those who came before them.

May these outstanding women keep moving forward for racial and gender justice, and equality.

Introducing African American singer Marion Anderson before she sings on the steps of the Lincoln memorial before a crowd of 75,000 people, Secretary of Interior Harold L. Ickes, who was known widely in Washington, D.C. for his humanitarian views, introduced Anderson with a large endorsement for racial equality and the movement for civil rights that was beginning to gain ground in the U.S. in 1939. Anderson had previously been denied a booking at Washington’s Constitution Hall because of her race. In the wake of public outrage, Ickes stepped in and secured Anderson’s performance at the Lincoln memorial.

Peace activist and WNN – Women News Network special reporter on Iran, Elahe Amani, works with immigrant women who are part of the South Asian, Iranian and the Middle Eastern ethnic communities in Southern California to help women from these communities build peace at home and in society. She is former co-chair of Women Intercultural Network, a global women’s organization with grassroot circles in Uganda, Japan and Afghanistan. Elahe has also lectured through the Women’s Studies Department and is also on the advisory board of The Women Center at CSU – California State University in Long Beach, California.