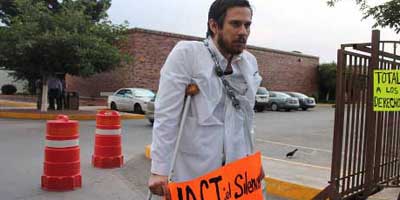 On the 21st May 2015, Dr. Antonio Muñoz began a hunger strike demanding better conditions and security for interns, and to stop exploitation in the Public Health Sector. He asked the representative of the university to care about the interns and stop sending them to practice in remote tribal areas where narco [organized criminal gangs relating to narcotics] has territory and on occasion clashes with authorities or these authorities are colluded with the narco, so students don't have any kind of protection from any side.

Time passed and nobody responded to him. On May 23rd, students went to ask him what he wants. He showed the result of a medical test he had and how the hunger strike is already affecting his kidney function. He explained that he asks for immediate response in the matter of security for the interns, and the re-location of work place in case the interns are in danger.

University representatives spoke to him, and he exposed his reason to do this. They invited him to talk about the places to work. He emphasised how some women interns received bullets in the health centre, and explained how to provide protection to women that go through this, and that if he arrives to do so they should invite him to go back three months later. He wants the organizations related to workplace and social services to be involved, so that it doesn't have to be the way it is now. He’s saying that the reason he wants a change is not personal - but that the places are dangerous, and he wants to ensure that others are not sent there.

Some of them have been mistreated, disappeared, been killed, received threats or worked with a gun at their heads.

According to all the Treaties and Conventions at International Law level, the objective is:

But what happens when there’s no more law? What about those countries where the law is null and the impunity rampant, without forgetting the corruption? We know that Mexico’s situation in Human Rights issues, security and some other subjects it is terrible, from enforced disappearances to torture.

Photo source: Antonio MuñozIf we pay attention, there’s no difference - both comments are maybe exactly the same regarding the 'self-defense' armed groups… well one report is from 1999 and the other from 2015, and until now we have not seen any difference or change.

So, I dare to mention one of the most important works and organizations: The ICRC and their newest edition “Professional Standards For Protection Work”. If we compare the demands of Dr. Antonio Muñoz with those articles and some points written by the ICRC, we can see that he is asking what any other professional would ask.

Every single humanitarian worker needs protection but what it is? According to the Professional Standards:

“…all activities aimed at ensuring full respect for the rights of the individual in accordance with the letter and the spirit of the relevant bodies of law, i.e. human rights law, international humanitarian law, and refugee law. Human rights and humanitarian organizations must conduct these activities in an impartial manner (not on the basis of race, national or ethnic origin, language or gender).” [2]

Photo source: Antonio MuñozWe must stand for those who are struggling, we cannot be indifferent to injustice of any kind; these are the humanitarian workers that tomorrow will save lives, these are our youth, our pillar to see the change we want in our world. Please - to the competent authorities around the globe, to the International Community - stand with our students in Juarez, Chihuahua, stand with those that want better conditions and a life with dignity. 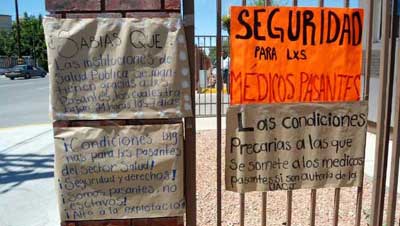 1st banner: Did you know ... that Public Health Institutions are working thanks to interns that work 24/7 ?

3rd banner: Decent conditions for interns in the health sector! Rights and security!
We're interns, not slaves! Stop the exploitation!

4th banner: The precarious conditions to which are subjected the medical interns themselves are responsibility from UACJ

Also a Facebook Page has been created, named “Neither God nor machine, not from plastic: I AM a doctor, I AM a person”

On the 26th May, while various social groups had organized demonstrations supporting Dr. Antonio Muñoz, we just know that the demonstrations were  suspended…. BUT FOR A GOOD REASON, finally University authorities met his demands - this is an unprecedented outcome.

We are very happy with the result, and we hope that any authority around the globe that can prevent such situations will DO SOMETHING about it. We can’t keep watching and filling paper sheets just with statistics - we need actions to every single demand that is fighting for justice, dignity and labourer conditions. We are humans and we must live like humans; it’s terrible that we still being witnesses of such desperate actions.

Still a Long Way to Go

But still we are calling the ICRC and all humanitarian organisations to help around the globe and give, provide or talk with Latin American countries and encourage implementation of the Professional Standards.

Another victory, but still a long way to go.

And if after all this we don’t see further change, how do we expect to set a worldwide justice standard? Please - to the UN, IFRC, , Amnesty International, Human Rights Watch and all those involved in humanitarian work - look at the youth of Mexico, and listen to us. It is not just about the university not taking any responsibility, it is about lives - if there’s no action against such abuses. How many went through this and we know nothing about it? Dr. Antonio Muñoz is challenging the status quo, he’s speaking on behalf of the Health Care interns; please listen to him.