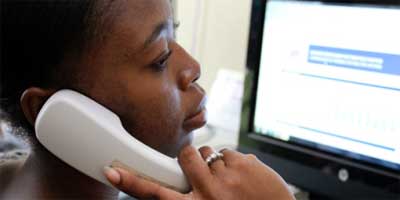 A Haitian phone operator at a call centre in Port-au-Prince talks to a survivor of sexual violence. | Photo: Emilie Reiser, Digital Democracy.

A 24-hour hotline for survivors of sexual assaults and rape is proving a lifeline for Haitian women and girls, in a country known for its high levels of sexual violence.

Thousands of woman and girls are sexually abused and raped every year in the Caribbean nation.

Although it was a widespread problem long before the January 2010 earthquake that devastated Haiti, sexual violence escalated after the disaster, women's rights groups say.

But recently, Haitian women have found support by dialling the country’s first dedicated hotline for survivors of sexual violence and rape.

“Just having somebody answer the phone, talk you through what the next steps are, knowing that you won’t have to go through it alone, it puts people at ease and gives them strength. You can hear that by the time they hang up the phone,” said Elmita Residor, one of six trained phone operators working at the call centre in the Haitian capital, Port-au-Prince.

All the operators belong to women’s rights group Kofaviv, which was founded eight years ago by rape survivors.

It means callers can find someone at the end of the line who is empathetic and sensitive to their plight, not something that is too common among Haitian society in general, local rights groups say.

Set up in September 2011 by Digital Democracy, a New York-based non-governmental organisation that uses technology to promote human rights, the call centre has fielded nearly 2,000 calls so far.

Two months ago, the hotline started working around round the clock, allowing women and girls to get help at night and weekends, which is when assaults are more likely to happen. The call centre receives 10 to 60 calls a day.

“Most frequently callers are asking what can I do, where to go, and what to do after incidents of sexual violence and rape,” Emilie Reiser, head of Digital Democracy’s Haiti programme, told TrustLaw in a telephone interview from Port-au-Prince.

Sexual assaults continue to happen in makeshift camps where 390,0000 Haitians who lost their homes in the earthquake still live, crammed together with little privacy and security under tarpaulin and scrap metal.

Reiser says operators emphasise the importance of getting medical care within 72 hours of a rape to prevent the transmission of sexually transmitted diseases, HIV/AIDS and unwanted pregnancy.

But the hotline has become more than just about helping survivors of sexual violence.

“It has grown with the type of calls, to cases of domestic violence and women asking about child support and child care,” Reiser said, adding that men also call the hotline seeking advice about violence in the home with their partners.

The hotline also aims to raise awareness among women about their rights in general.

“The aim is to increase information and address the information gap about women’s rights. Call centre staff provide basic education on women’s rights and legal recourse, and they connect survivors to free medical, legal and psychosocial services,” Reiser said.

The 572 hotline number is advertised on local television channels, on the radio and at police stations. It means women living outside the capital in rural areas can also seek help.

Haiti’s police officers often phone up as well to refer victims of sexual violence to Kofaviv for counselling.

Kofaviv says it deals with an average of around 40 rape cases a month. Its work also includes helping women file complaints with police and collecting women from police stations to get medical checks.