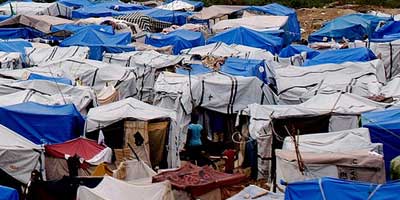 For an untold number of women and girls in Haiti, the aftershocks of the January 12, 2010 earthquake has been unending. Aftershocks, in the form of rape and sexual assault.

A report in the summer of 2010 revealed a shocking situation for Haitian women living in displacement camps following the January earthquake. Jeniffer Timmons investigates

In May and June 2010, two delegations of U.S. lawyers, community researchers and a women’s health specialist visited Port-au-Prince to investigate the prevalence of rape and other violence against displaced persons living in camps.

Over 50 survivors of rape or attempted rape were interviewed.

The vast majority of the women who were interviewed reported being raped by two or more individuals, who were unknown to them and almost always armed with guns, knives or other weapons.

RAPE IN THE CAMPS

Most of the women interviewed reported being raped by two or more individuals, and stated they would not be able to identify their rapists for the following reasons:

According to MADRE, the women said they could sometimes remember details such as stature, color of hair, clothing, or if their attacker had body piercings or tatoos. They commonly identified the perpetrators as coming from neighborhood gangs or from prison.

There were only a few crimes where rapes were accompanied by other crimes, such as robbery.

Humanitarian delegations have found that women who have been raped show post-traumatic stress disorder (PTSD) symptoms, including: inability to sleep, nervousness,  nightmares, and signs of depression, with more than a few attempting suicide.

Most all of the survivors complained of some physical discomfort resulting from their rape: stomach pains, headache, difficulty walking, vaginal bleeding and/or infection.

Some also experienced more visible physical evidence from beatings or stabbings. There is also the stigma of contracting HIV or becoming pregnant as a result.

To compound their physical and psychological problems,  representatives of MADRE found that the majority of the  women did not seek medical care for a number of reasons:

If survivors did make it to a clinic, they often faced lack of privacy, limited access to female providers, unavailability of emergency contraception and HIV prophylaxis, and extended waiting times. Many left without seeking the care they desperately needed.

They also left without medical certificates documenting that they had been raped; some judges and other law enforcement authorities reportedly demanded such documents in order for their cases to be heard.

Most women seemed to be unaware that medical certificates were necessary.

In nearly all instances, women who reported sexual violence crimes to the police were ignored or mocked.

Amnesty International's report in March 2010 reported “thousands of women living in temporary camps around Haiti are threated by sexual violence and have inadequate protection from any authorities...The lack of measures to prevent and respond adequately to the threat of sexual violence is contributing to the humanitarian crisis.”

MADRE, and other human rights organizations report little or no justice for rape and sexual assault, due to lack of access to legal services and unwillingness of police to respond.

Fear of retaliation, stigma of rape, threats by the perpetrator to the victim and her family if she/they report the crime, low likelihood of rapist being caught and tried, as well as police corruption present great obstacles for those seeking justice.

None of the interviewees were aware of safe places or shelter where they could go; a few were raped on more than one occasion after the earthquake.

There is no tradition of publicly funded legal aid in Haiti, making vulnerable populations even more vulnerable, with little or no resources to relocate.

The lack of a meaningful response on the part of the Haitian Government to the rape crisis in displacement camps is a result of both lack of resources and lack of political will. The loss of officers and police stations from the earthquake seriously compromised the ability of police to maintain security and enforce the law.

A major issue is a lack of female officers in police stations; women survivors are generally uncomfortable reporting crimes to male officers. Not all police stations have specialized officers on staff to hear gender-based complaints, but it has been suggested by various organizations that at least there should be female officers at every station to whom such crimes can be reported.

In June 2010, the UN, via Bangladesh, sent a contingent of an all-female force to help patrol the camps, which had been welcomed by Haitian women. However, the effect of their presence has been minimal as the female troops do not speak neither Haitian Creole nor French, thereby making meaningful communication with Haitian women nearly impossible.

Medecins Sans Frontieres reported 300 rapes in the first two months after the earthquake.

“Women and girls live in inadequate shelter, often sleeping under nothing more than a tarp or blanket, with no means of protection and no friends close by, and bathe in public, in view of men and boys.”

Similar stories of bleak conditions about the displacement camps  which foster rampant sexual violence from news outlets and humanitarian organizations informs us that much as not changed since the days following the earthquake in January.

The Director General of the Haitian Police, Mario Andresol, stated in an interview that there had been only 20 cases of rape reported to the police from January?March in the capital.

What also is obvious is how little respect claims of sexual violence get justice, let alone acknowledgment.

When questioned by an Al Jazeera news correspondent about the regular reports of rape in a camp adjacent to a UN base, UN Police Spokesperson Jean?Francois Rezina discounted the women’s stories, saying it simply was not true and that the UN “[did] not have any information about rapes every night.”

Shame on the UN for this shocking lack of insensitivity.

The women and girls of Haiti should  not have to resign themselves  to accept that rape and sexual assault is a matter of course, due to their dire living circumstances.

“The State has the absolute obligation to guarantee the right to life, health, and respect of the human person for all citizens without distinction, in conformity with the Universal Declaration of the Rights of Man.”