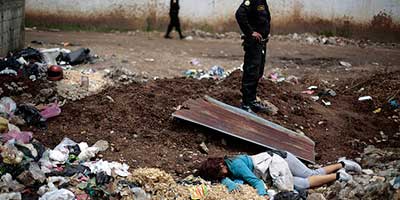 This is what a culture of machismo and patriarchy, fuelled by entrenched impunity, looks like in its most extreme form – women murdered and then discarded like rubbish in alleyways, dumpsters and along city streets in Guatemala and El Salvador.

Such scenes are not uncommon in Central America, a region with the world’s highest rates of femicide, defined as the murder of a girl or woman by a man because of her gender.

El Salvador has the highest rate of femicide in the world, followed by Jamaica and Guatemala, according to a 2012 report by the Small Arms Survey, an independent research project in Geneva based on figures from 2004 to 2009. 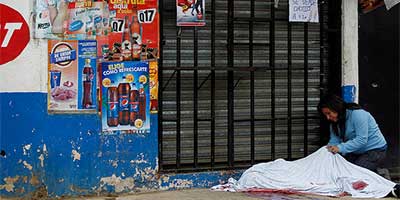 Many victims of femicide are shot dead in the street or in their homes with a firearm.

This woman in the photo above was found lying in a poor neighourhood on the outskirts of Guatemala City, also in July this year. She was shot dead while standing outside a shop.
Femicide in Guatemala, a nation of 14 million people, is on the rise.

Femicide in Guatemala, a nation of 14 million people, is on the rise.

From January to October of this year, 592 femicides were reported in Guatemala, 78 more than during the same period last year, according to Guatemala’s National Institute of Forensic Sciences (INACIF).

Young women from all walks of life - including housewives, students, textile workers, street vendors - are victims of femicide, and they often come from poor backgrounds.

During the first six months of this year, there were 100 femicides in El Salvador, according to police figures.

So why is Central America grappling with the highest femicide rates in the world?

Campaigners say impunity is a big part of the problem. In Guatemala, up to 90 percent of crimes against women go unpunished, rights groups estimate. It means perpetrators of violence against women believe they can, and often do, get away with crimes.

There is little confidence in the criminal justice system, a lack of police trained to deal with gender-related crimes, and low prosecution rates for crimes against women - including domestic and sexual violence. Together these problems prevent women from coming forward, keep more cases from going to court and leave perpetrators off the hook.

Femicide also stems from entrenched machismo that condones violence against women and blames women for it, rights groups say.
The high level of domestic violence is another key factor behind femicide in Central America. Violence against women in the home is seen as a private matter that should be dealt with behind closed doors. It’s common for victims of femicide to have a history of domestic violence, rights groups say.

In Guatemala, roughly 60 percent of all femicides take place at the hands of former and or current boyfriends or husbands, using firearms.

The region’s femicide rates are part of high levels of general violence in many countries in Central America.
Guatemala and El Salvador have some of the highest murder rates in the world, fuelled by spiralling organised crime in these countries and a violent turf war between Mexican cartels and other drug traffickers, battling over cocaine smuggling routes to the United States.

Women can get caught up in organised crime and gang violence, often carried out by local street gangs known as maras. Rights groups report that women are killed to settle scores between rival gangs or targeted in attacks designed to send a message to male family members. Some are killed simply because they have spurned the sexual advances of gang members.

In the past decade, key laws have been passed in Central America - including in Guatemala and more recently Nicaragua and El Salvador - to tackle violence against women.

In Guatemala, for example, a law passed in 2008 defined femicide as a specific crime against women, carrying a prison sentence of 25 to 50 years, without parole. Special prosecutor and police units and tribunals have been set up to deal exclusively with femicides and other gender-related crimes. 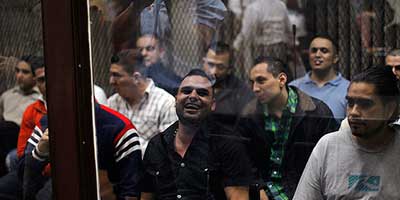 In this photo taken in Guatemala City in July this year, men sit to hear their prison sentences at a court that deals with gender-related crimes. During this trial, 12 men were convicted of 14 rapes and an equal number of kidnappings of women aged 19 to 26 years. The convictions ranged from 54 to 108 years in prison. The women were kidnapped at night, raped in cars and then taken to cash bank machines to withdraw money.

In June last year, judicial officials in El Salvador handed down the first ever conviction for femicide.

Such measures are a step in the right direction and there is a glimmer of hope, local rights groups say.

Despite recent laws passed to tackle violence against women, the high rates of femicide in Guatemala and El Salvador show little signs of abating.