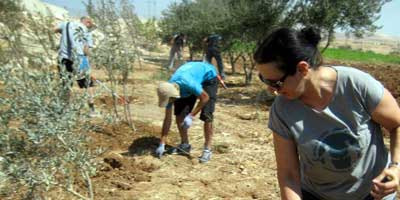 Irit Hakim, with other members of Combatants for Peace, helping on the land at Anata, to show solidarity with the Palestinian family.

Palestinian Homes to be Demolished at Any Moment

Arriving at AnataThe “Jerusalem-al-Quds group” of Combatants for Peace (CfP) has been working together with the Fehidat family for a few years now.

Since January, the Fehidats' homes have been under threat of demolition – a total of 17 houses in their neighbourhood in which 71 people live.

At the start of September, the Fehidats were notified that these demolition orders have been reactivated and all court proceedings halted.

This means that the army may demolish their houses at any moment.

Basically, the family are supposed to hire a very expensive lawyer (which they can’t afford) who would dig in the archives in Istanbul and provide the acceptable paperwork to the capricious occupier – the Israeli government.

The women worked in the field of green mint and parsley.On Saturday, September 7th 2013, we – the members of CfP, went to Anata to demonstrate.

No demonstration in the ordinary sense of the word.

It was to show our support for the person and his family, to whom the occupation is doing an injustice, such as occupations can do.

We went to work together with the family, on their land, and thus to say "No!" to home demolitions in the West Bank, "No!" to planned evacuations and demolitions (some have already been carried out) on the outskirts of Jerusalem, and "No!" to mistreatment of Palestinian lives.

Ziad Fehidat's family lives on one side of the Wall, which divides the village in two. Both sides of the Wall, here, are in the West Bank. There is a continuous passage from one side to the other, without interruption. The check-points are on the way to Anata, before reaching the Wall.

The side of the Wall where the Fehidat’s live looks beautiful and aesthetic; as it is on the same side as the settlements and the nearby military base and the settlements beyond. Elsewhere, the Wall looks ugly and threatening, with grey cement, rather than stone-built.

"At least we won this," said one of the boys with a triumphant grin.

“Thank you for being part of our life"

The family space is bordered by the military base. Under the watchful of soldiers (at one point a car passed, driving slowly along the fence) we dug watering dishes around the trees, we raked the earth, and the area became beautiful with a fresh look. The area is now ready for new crops.

The women of the family worked away from us - according to the soclal code of the culture, because we were a group of men and women. So they sat literally in the field of green mint and parsley, harvesting them, for on the same day they will reach the market.

There was an intoxicating scent in the air.

Then we sat down for lunch and conversation.

Ziad expressed gratitude and excitement, and invited us to come again and again, not just to work.

“Thank you for being part of our life," he said, which moved us all.

We parted “equipped” with garlands of mint and parsley, smiles, and excitement.