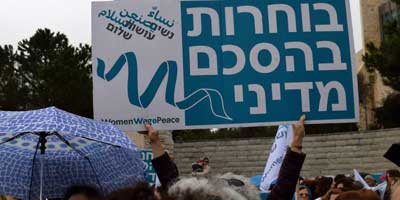 Irit HakimMany Israelis are brimming with energy to make changes more than ever, since the re-election of Prime Minister Benjamin Netanyahu​. Israeli people are mostly fed up with the government which became extreme-right and very fascist. Human rights are violated, the economic situation is very bad, and occupation hits Palestinians - with a negative influence on the Israeli's life too.

In recent years there have been social protests – which were led by women, and political protests which were led by leftist parties, with a significant participation of women. There is a very great awakening of women leaders. Not only in politics, but also in social activity.

I recently participated in three events, two of which were led by women.

On Wednesday, 4th March 2015, 3,000 women, children, youth, adults (including a few hundred men) and older women, marched to Jerusalem, to the Knesset (Israeli parliament) Rose Garden. They were women from all of the social and political spectrum, with the message of Women Wage Peace, an NGO:

“For the past 12 years there is a peace initiative by the Arab League to end the conflict. To date, no Israeli government regarded this initiative. Are we sure we're not the missing partner ourselves? Political agreement is in Israel's interest, even if it's hard. It's our duty to us, to our children, and to the future generations.”

We marched singing peace songs, and calling out rhymed slogans: “One two Three Four – we do not want another war” “Enough! to Binding of Isaac and Ishmael” “Peace is not a dream” and more…

A wonderful group of ukulele players and singers accompanied us. They were youth from the Arab village Tira and the neighbouring Jewish city Kfar-Saba, who meet once a week at one of their homes to sing together.

On our way, we saw the Peace Bell – a heavy metal bell, with the word PEACE on it in many languages. It was given as a gift to Jerusalem on its 3,000th anniversary by Japan, in 1996.

It was raining, but nothing would stop us. The air was clear, crisp, and scented. The blooming was colourful. Crows cawed in the grass.

On the grass of the Knesset’s garden, we listened to speeches and to music. Children with flags in their hands walked among us, some in costumes for Purim holiday. A beautiful Bilbi (the Hebrew for Pippi Longstocking, a beloved children's literature character) – a real redhead with two braids,  agreed to pose for me.

Irit Keynan, a professor at the academic college and head of the graduate program for education, as well as head of the Institute for Civic Responsibility, said that for years, we – Israelis – have been immersed in a futile discussion where we convince ourselves that there is no partner for peace and have no choice but to get used to living with the conflict.

“The word 'peace' has become a dirty word! We have been advised to change the name of our movement!!!! (Women Wage for Peace I.H.) A world of distorted concepts has been born: patriotism is associated with war, and peace is a dirty word. Something over-turned here, is it not?”

Mor Truaha, of the movement, added:

“We came from all parts of the country to remind you that, like the Jewish state was not a legend, even the end of the conflict is not a fairy tale if you like.

Michal Keidar, the widow of Dolev Keidar, who was killed during Operation Protective Edge, sent a message from the United States:

"Dolev gave his life for this country. The least I expect of you is to think who has the best chance of giving us hope for a quiet normal life, and go vote for him/her."

After the speeches and the musical part of the day, people just talked and socialized. The feel was amazingly strong and it felt empowering. The event was inspiring and left us all with high adrenaline, excited, satisfied, and full of hope.

On the Israeli side, about 450 women demonstrated calling in Hebrew and Arabic slogans: "Peace – Yes. Occupation – No" and “Stop the Occupation “, “Jews and Arabs refuse to be enemies” “End the Occupation”

We, the Israelis present, believe that the struggle for women’s rights must include those who live on the other side of the Green Line.*

On the Palestinian side of the Qalandiya checkpoint, 2,000 women protesters marched from the camp to the checkpoint. Although it was non-violent protest, they were driven back by soldiers who fired tear gas at them, rubber bullets, and stun grenades. The soldiers told us that stones had been thrown at them.  Thirty women needed medical attention. On the Israeli side, one could hear and smell the tear gas, but not see the demonstrators. Nabila, the Israeli-Arab organization, told us that it was true – stones had been thrown at the soldiers, but they were young men who threw them….

One of the Arab women, Fida Abu Dbai said:

“Feminist women who believe in human rights should be in solidarity with every woman who lives under discrimination, injustice and in a very difficult reality. Palestinian women cannot freely move, they cannot be developed, and do not have the basic right – the right of life of freedom.

Occupation means settlements constructed on Palestinian territories and the fences that separate us from our Palestinian sisters on the other side of the fence.”

She said that talking also about male patriarchal society is actually talking about a militaristic squashing of another people and the rights to construct their own country:

(As an aside, I would add, since Occupation even within the Israelis, the rate of violence increased, and domestic violence in particular.)

“We refuse to ignore the suffering of women beyond this wall. We believe we can break walls, the walls between us, and to ensure a just and a sane future to Palestinian and Israeli”

There is Another Way

On the very same Saturday, straight from Qalandya, I went to visit my mum and we spoke about the wonderful activities of women. My mum lives in Tel Aviv next to Rabin Square, where a rally took place just a couple of hours later.

The Million Hands grassroots campaign which initiated the event, along with other social movements – and with 80,000 people, came to say they WANT A CHANGE!

Dror Ben Ami, co-founder of Million Hands, said that many Israelis have a real sense that their country is being taken from them, by the government – which is definitely how I and my friends feel.

"This is a show of strength and anger which I want people to look at and decide not to remain indifferent..."

People carried signs saying: “Israel Wants a Change” “There is Another Way”. A huge red balloon, which had on there the words: “Flip Bibi”,  was rolling above people’s heads, from end to end, to and fro, until it exploded.  Very symbolic.

I was there with my friend of CFP (Combatants for Peace), wearing our organization's t-shirts. We called people to sign a petition against a huge settlement called E2, which is going to be near Bethlehem, and which will block – if established – any territorial contiguity so it will be impossible to establish a Palestinian state.

"Netanyahu is a leader who fights only for political survival…. Israel is a country surrounded by enemies, but the enemies do not scare me. I'm afraid [for] our leadership…I fear the lack of vision and loss of the way. I'm afraid of indecision and stagnation, and I fear above all a crisis of leadership is the worst [that has] happened here today."

Others who represent a major proportion of Israeli society also spoke of leadership replacement and the fundamental change needed to ensure Israel is sane and democratic.

*Green Line - demarcation line set out in the 1949 Armistice Agreements between the armies of Israel and those of its neighbours after the 1948 Arab–Israeli War, and the Israeli border, until the Six Days war 1967 when the West Bank - an area populated by Palestinians under the Jordanians, was conquered.