Sindyanna of Galilee: A Solution to the Middle East Conflict 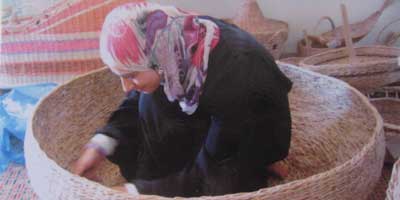 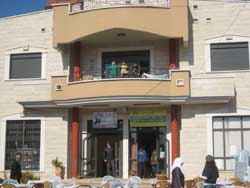 Visitor CentreI joined a group of people to visit the oil factory of Sindyanna of Galilee at Kufr Qana, then went to the Visitors Centre in Kufr Manda – two Israeli Arab villages.

The group I was with included friends and active members of Sindyanna of Galilee; I returned full of admiration and inspiration.

Established in 1996, Sindyanna of Galilee is a registered non-profit organization.

Led by women striving for social change, it operates within the Arab population of the Galilee region in northern Israel, and seeks to help growers and producers from the Palestinian Occupied Territories.

Furthermore, Sindyanna combines commercial activity with work in the community, thereby enhancing the empowerment of Arab women while developing the olive industry.

Its focus is on values such as land preservation, environmental considerations, and commerce according to the principles of fair trade.

Sindyanna symbolizes a unique cooperation between Arabs and Jews, striving to strengthen the economy of the Arab-Palestinian population, both in Israel and in the Occupied Territories.

Sindyanna is not only a means of helping farmers and growers from the North, but also a way of showing that a solution to the Middle East conflict begins with creating real economic opportunities.

Video of Sindyanna of Galilee members (in Hebrew, w/English subtitles)

The name Sindyanna of Galilee refers to the Palestine Oak (Quercus calliprinos).

These trees are known for their long lives, and if nothing damages them they grow to enormous dimensions.

Sindyanna of Galilee chose its name because of the significance it has for Galilee residents today.

According to the contemporary Palestinian folklore, the oak is blessed with endurance, stability and rootedness to the land; therefore it symbolizes the Arab citizens of Israel who remained firmly on their lands and refused to leave during the war of 1948.

The idea of establishing an association took its inspiration from the peace movement and the solidarity with the Arab population in Galilee.

This is an initiative of an active group of Jewish and Arab women, who had organized themselves to create an enterprise that would provide an economic solution for people who were involved in the social activities of Galilee, and against expropriation.

From the very beginning, the project was based on the power of women; the women in Israel who have joined Sindyanna at Galilee, work at the management and production levels.

Sindyanna of Galilee FairTrade is the leading fair trade body in the country, and the only one authorized by international bodies.

The association was established in 1996 to promote economic opportunities and employment for women, and  is committed to the values of peace, equality, and well-being for all.

Sindyanna of Galilee works according to the principles of "fair trade" and marketing to the local market and to the international one: through traditional food and palm fronds baskets.  It acquired experience and  position in the export world, and is known for its high quality olive oil.

Sindyanna of Galilee enjoys the support and cooperation of many parties in Israel and abroad.

We arrived to oil factory in the village of Qana:  Shiny, attractively arranged, and with an aroma of hyssop in its space.

Hyssop is known as a plant used in purificatory sprinkling rites by the ancient Hebrews. It is also described by contemporary sources as a European mint (Hyssopus officinalis) that has highly aromatic and pungent leaves, and is sometimes used as a potherb.

Ms. Svetlana Krongoaz - production manager, set us up on a tour of different rooms, such as the  Spices Room - where they make the mixture of hyssop plant, thyme, olive oil, sumac, and sesame, all organic.

In another room - they drained the oil through the machine, before bottling.

In the third one – they packed soaps made from the Sindiana's oil, by a factory in Nablus, according to a traditional local recipe.  Their soaps are enriched with natural ingredients: honey, sage, milk, pomegranates, and mud from the Dead Sea.

Before we said goodbye, we received a gift – a small bottle of olive oil.

At the Vistor's Centre: A Delightful Experience

We went on to the Visitors Centre in Kufr Manda .

The moderator of the meeting was Ms. Hanan Zoubi, who told us about the centre's activities.

Ms Hadas LahavMs. Hadas Lahav, Director of the association, told us about the Sindyanna and about its activities.

Wicker items made of palm fronds were displayed at the Visitor's Centre.  You can see the joints of the fruits which are part of the product's aesthetics. Women learn the art of weaving – creating beautiful details that are sold at the centre.

Arab women find a source of income while preserving traditions.

Ms Wahiba Hajirat, a braiding and weaving expert, manages this impressive project. Jewish and Arab women sit together to learn the art of basket weaving.

People have come from all over Israel and from abroad to visit the Centre.

Our delightful experience ended with a delicious meal prepared by women of the village, which is another source of income for them. The women of the village (in which the Visitor Centre is located) prepare meals that are coordinated in advance, and the diners pay for them.