IRAQ - The Road to Gendercide 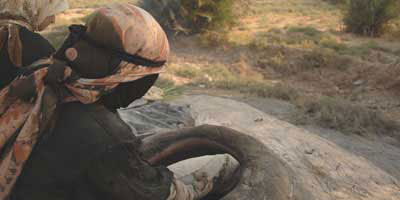 "The start of the Gendercide against Iraqi women was demonstrated through the mass murder of over one million children, who lost their lives as a result of the UN imposed Sanctions."

"The war against Iraqi women did not start until the Coalition forces of George Bush, Tony Blair and Ahmed Chalabi decided to invade..."

Part of that debate has got to include just how far the occupation of Iraq is willing to turn the clocks back, on the rights and civil liberties of women in Iraq, where the displacement, poverty, the imprisonment and forced separation of families have become the weapons of choice to both humiliate and control Iraq’s female population.

The current situation faced by Iraqi women is a continuation of a “mediaeval tradition”, which is being enforced by “civilised colonialists”, a scene which is reminiscent of a description of life under the first British rule of Iraq in the 1920‘s, where “under tribal laws women could be murdered and the murderer escape punishment”, with British colonialism seeing women as “deficient human beings”.

As early as the 1920's, women challenged the forced wearing of the veil.

But whilst under the atmosphere of colonial repression, where “women suffered from the consequences of backwardness and dependency, which the “colonialists strove to maintain”, Iraq’s women rallied to the cry of their nation and took an active lead in resisting the presence of foreign troops, by taking part in military campaigns and actively protesting for the release of Prisoners of War.

As early as the 1920’s, women also took a leading role in resisting the ill treatment that was being forced upon them in the home, by mounting a direct challenge to the forced wearing of the veil and resisting the status quo by demanding a woman’s right to education.

A story is often told, of a female Iraqi freedom fighter whose brother had been taken by the British authorities and confronting his captors, threw the veil into the air, and with her long hair flying loose, declared to the occupying power that she too, would fight for the freedom of Iraq.

The traditions of resisting colonialism made history inside of the Middle East, when after the revolution of 1958, finally saw the end of the British puppet regime of Nouri Saad and the new Iraqi republic, led by General Abdul Karrim Qassim, along with Iraqi women started to write their own history by having Naziha Dulaimi, the first-ever female cabinet minister, elected to a government post.

Whilst progress continued to be made inside of Iraq, from 1958 Iraqi women saw many revolutionary changes in both the laws and their social standing, including the introduction of the personal status law, which allowed a women an equal share in property if she divorced.

Women also saw advancements in career prospects, as a result of the nationalisation of the oil industry, which according to UNESCO “Iraq was one of the only countries in the world where, even if you were born in absolute poverty, with illiterate parents you could come out of the education system either a brain surgeon, archaeologist or whatever you wished to become."

Throughout the 1980’s, when women lost male relatives during the eight year war with Iran, female dependents were given recognition by the state, where even the Iraqi opposition welcomed provisions such as debt cancellation, land, secure homes, widows pensions and other necessities which were given to prevent women from falling into the poverty trap but such measures, which also allowed Iraqi women to maintain their own independence.

During the Iraq/Iran war, women also took a great leap forward, where similar to the British land girls in World War Two, Iraqi women took over the professional roles in society as a result of men being in the front line of combat.

In effect women became the doctors, the architects, teachers, the engineers; infact the engineers of Iraqi society itself.

The war against Iraqi women did not start under the occupation but in fact began after the first Gulf War and through out the 1990's, until the Coalition forces of George Bush, Tony Blair and Ahmed Chalabi decided to invade, under the pretexts of liberating Iraq from dictatorship in 2003.

The start of the Gendercide against Iraqi women was demonstrated through the mass murder of over one million children, who lost their lives as a result of the UN imposed Sanctions, which also left Iraq unable to purchase basic items including tampons, pencils and medications such as Asthmatic inhalers.

According to the UN, preventing items like pencils from entering Iraq was because the graphite was categorised as “Duel Use”, therefore it could allegedly be used in constructing Saddam’s “weapons of mass destruction“. Sarah Flounders, author of De-Linking Sanctions stated in 1997, that other items denied to the Iraqi people included; “batteries, X-ray machines, ambulances because they could be used in battle and enriched baby powdered milk,” which supposedly could be used in germ warfare.

"Women had to pick up the pieces"

As Flounders also stated “many of the children killed by Sanctions died from diseases carried by impure drinking water", when before the first Gulf War, the vast majority of Iraqi people did have access to potable drinking water but “good drinking water needs pipes, pumps, filtration and chlorine. But Washington defines chlorine as a “Duel-Use” item, as it does the pipes that would be used to carry water.”

A study conducted by Harvard, discovered that after the Gulf War there had been a “fourfold increase in child mortality and a high incidence of health problems among women, including psychosomatic conditions such as sleeplessness and mental disorders.”

In the early 1990’s Dr. Suha Omar also described how there was a dramatic increase in domestic violence, with “traumatised conscripts” returning to Iraq, who “would take out their distress and anger on wives, daughters, mothers and sisters.”

In other words, “Women had to pick up the pieces” because the men were either mentally or physically damaged by the war, with the situation being exasperated by the “drastically worsened economic situation, as victims of the pauperisation of Iraqi society.”

Even though in 1997, a UN weapons inspector declared “Iraq had been disarmed” in 1919, Woodrow Wilson described how effective “sanctions” could be, with the process being a “peaceful, quiet and lethal remedy”, which “doesn’t take a single human life outside of the country exposed to the boycott, but instead subjects that country to a pressure that, in my view, no modern country can with stand.”

When Madeline Albright, then US secretary of state to Bill Clinton was asked on US television on 6th May 1996, whether she believed the deaths of 6,000 Iraqi children a month, was an effective way to “contain” Saddam Hussain, her response was similar to those who now see death, destruction and the full scale terror of Iraqi women, as being “a price worth paying“, to bring freedom and democracy to the people of Iraq.

Hussein Al-alak is Chair of Iraq Solidarity UK, journalist for the UN Observer, Uruknet & others and activist for Combat Stress: The Veterans’ Mental Health Society.