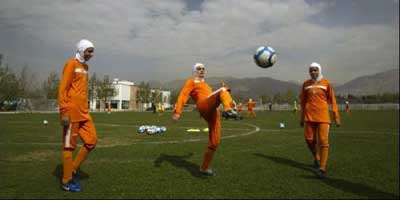 Ten Years after the United States and its allies invaded Iraq in pursuit of "Operation Enduring Freedom", Iraq is rising again. One of the most prominent places is with a ball at the feet of Iraqi women.

The war on Iraq was merciless. The lies, murders and economic interests of the US violated every possible human Charter and convention imaginable.

Under the treacherous guise of "liberating" 25 million Iraqis the United States lead a siege to topple Saddam Hussein and uncover Weapons of Mass destruction. And of course, no weapons of mass destruction.

The timeline and trillions of dollars spent on this "war" is unfathomable. The lives of children lost and destroyed are innumerable. Ten years ago there was much opposition to this invasion.

A decade later that media is asking such ridiculous questions as "was it worth it?" tells us that that no, it wasn't. Sanctions and bombing and rapes and dehumanizing acts of war were not worth it.

The invasion and then sanctions ignited civilian unrest, sectarian violence and a humanitarian crisis.

Pre-war and devastating sanctions, Iraqi women had the highest literacy rates in the region.

This war unleashed a war on women and their bodies. Incessant rapes in prisons and violations of women in conflict zones by all parties. The details of these offences are horrific.

Before the war, women enjoyed political, social and economic rights. They were also participants in major sporting events representing their country.

In 2003 the Iraqi football headquarters were destroyed and in May 2004 was was left of a football stadium in Fallujah became the site of mass graves for the public.

What was left of a country whose people were raided, abused and suffering from sanctions? Their dreams of athletic greatness were put aside as they simply managed to survive. Very little training, support or opportunity.

However, the resilience and determination of Iraqis is an element that can not be denied.

Since then, there have been many initiatives to rebuild Iraq and many of them through sport.

Football For Unity (Team Iraq) has worked with over 5,000 young Iraqis since 2003 establishing regular practices, training and teaching life skills. They stress the importance of being Iraqi first and foremost, then associating with a particular sect or religious branch.

There have been efforts to re-establish the league in Iraq and the women's national team has been training for the upcoming 2015 World Cup qualifying matches. The national team was selected last spring but there is much work to do. Azhar Mohammed of the Iraqi Central Football Federation did state that a "comprehensive revolution" will be required for women's sports in Iraq.

There is a lot of emphasis on training youth in Iraq and providing them with tools to help their battered country.

There have been football player exchanges and training tournaments for girls between Middle East countries and Norway (NFF), which have proven to be a success. Particularly exemplary are initiatives by the NFF [Football Association of Norway] to Iraq which help develop, teach, train coaches, officials, club staff and and build pitches for young girls in football.

There has been a promising beach football tournament, first of its' kind in the Middle East, was organized for September 29, 2012. It requires very little infrastructure and the players do not even require boots and shin guards. They play in bare feet so the cost is kept to an absolute minimum. It is accessible for many women. Full video:

The players at this tournament were thrilled with the outcome and the potential it has for women's sports in Iraq.

Even in the northern Iraqi provinces (governed by Kurdish administration) there are programs to empower young girls through sport- particularly football.

With this good news and the recent report that Iraq's Men national team has resumed its' training in the nations' capitol for the first time since the war began, there is much promise that football may play a large role in uniting and inspiring people of a land destroyed.

Al Chaab Sports Academy aims to do exactly this. Working with Sunni, Shia and Christian youth together on the pitch, they promote brotherhood and unity among Iraqis. They ascertain that everyone is equal on the pitch and in society.

"At the Al Chaab sports college, the means to peace in Iraq is through education and football. Trainer Bassam Raouf Hamid, a former international with the Iraq team, lived in Sweden before setting up a programme in Baghdad where young people from all denominations play together. The club has 120 pupils and 15 top-level trainers who train 18 local teams. The young players all dream of one day being selected for the national football team, the pride of the country".

Football is tied so heavily to national pride and identity in Iraq.

May it be vehicle for change and access and stability.

May Iraqis get the chance to live in prosperity and may they get to run freely and safely on their pitches or in the sand.