Four days with Sarah Shourd and the UK media 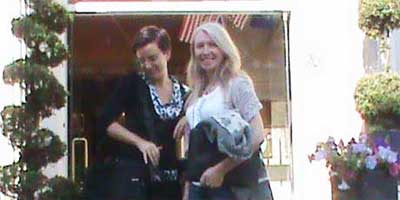 Six weeks ago I was with Sarah Shourd in London.

Looking back at my calender reminds me of how exhausted I felt after the gruelling media schedule, and I wasn’t even the one being interviewed!

For Sarah, this is part of day-to-day life.

Sarah is still suffering post traumatic stress disorder after being held in solitary confinement for nearly 14 months, in Iran.

If her friends, Shane and Josh, had been released at the same time, then she would probably still be spending time recovering and keeping out of the spotlight.

But, ten months after Sarah’s release, Shane and Josh are still virtually hostages in prison in Iran, awaiting trial on espionage charges. And Sarah is still campaigning for their release.

After seeing almost no-one but her two friends for well over a year, Sarah was thrown into the limelight.

I asked Sarah how she can cope with the never-ending interviews. She said she’s used to it now. It’s almost like a job to her; part of her routine. She also said she’s far more comfortable being an advocate than being totally helpless. She’s used to advocating for people’s rights. Before she was imprisoned, she was helping Iraqi refugees in Syria; before that, the Feministas in Mexico.

And of course Sarah is driven by the thought of her two friends in prison, awaiting trial for espionage. As she has said, time and again, she only feels one third free.

Still, it never ceases to amaze me how she keeps going.

Sarah told me that sometimes an interview can feel like being interrogated all over again.

The media were cramming to film her as soon as they could, after she was released from prison in September.

My own experience with the media began six weeks before Sarah was released, when I was organising a UK media tour for the mothers of Sarah and Shane.

I have to say that, with the UK media I have been dealing with, I have found them to be remarkably sensitive. Or may be I’ve come to learn which individuals within the media are approachable with regard to human rights issues.

Sarah’s UK media schedule, in June, started the day after she flew in from the United States to Heathrow, with a Times Newspaper interview.

The next morning, we got up at 6.15 am to be ready for a BBC taxi to the Breakfast Television studios. Then we were whizzed off to the BBC Persia studios.

The next day it was BBC Radio Woman’s Hour, BBC World TV and Channel 4 News. Day 4 was BBC Hardtalk, an Amnesty International interview, followed by the Brazilian newspaper O Folha and finally The Majalla at the Arab Press House.

The following day Sarah flew back to the States.

There were light moments, such as being taken for lunch by the Channel 4 producer.

And the telephone which rang in the middle of the interview with Jon Snow. For a moment I panicked that I'd forgotten to switch my phone off. But - no - it was Jon Snow's telephone in his pocket!

But, basically, it was a gruelling schedule for anyone. The rushing, the strict timelines, the compulsory make-up, the waiting.

Unlike personalities who are on television to promote something, or who are aiming to be stars, Sarah has no real measure of success until the day that Shane and Josh are released.

Sarah had never set out to become a star or to get her name in the headlines.

In prison, Sarah, Shane and Josh had envisioned, over and over, the day they would be released. How they would celebrate; what they would do together. Shane proposed to Sarah in the prison courtyard, during the short time she was allowed out of her isolation to be with her friends.

This proposal, and planning for the wedding, had kept Sarah going for the 23 hours a day she was alone in her cell.

It had never occurred to her that she might be released without the only two friends she’d seen for the last year. That she would have to spend the next ten months in the limelight, campaigning for their release.

Sarah and the families are helped by the unending support of people throughout the world; people who Sarah, Shane and Josh never knew and who never knew them.

Sarah remembers learning that we were campaigning for them, when a pile of letters from her mother reached her in prison. And how much it meant to all three of them.

To me, this emphasises the importance of campaigning for prisoners who are unjustly detained, whether or not there are tangible results, i.e. whether they are released.

For the prisoners, to know that there are people in the outside world campaigning for them can help to sustain them, in what can otherwise feel like a hopeless situation.

When Shane Bauer’s mother was at the Front Line Club in London last summer, Maziar Bahari and BBC Persia’s Sina Motallebi were talking about the time they had spent in Evin Prison. They said that the very worst thing for a prisoner is to feel that you have been forgotten.

Shane and Josh are certainly not forgotten, though for them it may feel like that during the dull endless weeks when they wait for the next batch of letters to be passed to them by the guards.

They have been cramped into a small cell together for almost two years, awaiting trial. Two trial dates have been cancelled. They have had one hearing, back in February, but virtually no access to their lawyer.

At the end of this month, they will have spent two years in jail.

If the next court hearing is not cancelled, part 2 of their trial will be going ahead on the second anniversary of their detention - July 31st.

Once more, the Iranian judiciary has promised that the resolution of their case is near; an echo of a similar promise made the same time last year.