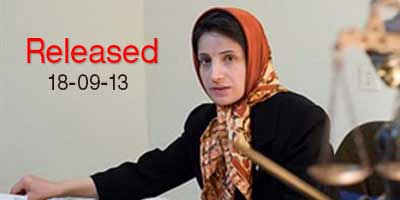 Safe World for Women had been campaigning to free Iranian human rights laywer, Nasrin Sotoudeh, for almost three years, two months after she was arrested on 4th September 2010.

Staff and supporters of Safe World for Women shared in the world-wide elation at Nasrin's release.

On 18th September 2013, Chris Crowstaff sent out the following message to the 8,665 supporters of the petition:

According to the Facebook status of Reza Khandan, Nasrin's husband, Nasrin has today been released unconditionally from prison!

Thank you for your endless support for this campaign! With a total of 8,688 signatures we feel sure that it made a difference! And certainly it helped Reza and also Nasrin herself to feel supported - they have been aware of your support ever since our advocacy coordinator, Joanne Michele, was in touch with Reza back in December 2010.

You can read Nasrin's story on the petition updates here.