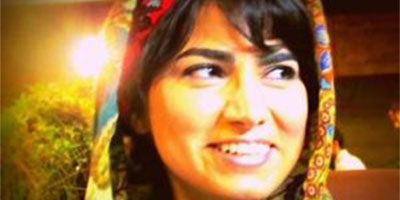 During one of the most “alarming” months under jurisprudence in Iran, as 40 executions were carried out in the region since the start of the new year in 2014, jailed activist Maryam Shafi’Pour is still waiting for a stay on her case of incarceration. Shafi’Pour has been imprisoned since July 2010, outline human rights advocates who are located both inside and outside of Iran. Today Maryam is being held in the women’s ward of Evin prison as she suffers under deteriorating health conditions. Recently her high blood pressure reached dangerous levels rendering her unconscious as she was transferred to the Evin prison’s infirmary in Tehran, in Iran’s capital city.

Maryam Shafi’Pour was first accused and charged with ““spreading propaganda against the system” in a 2010 suspended case that first brought her before the Revolutionary Court in Qazvin; a case she faced in 2010 without access to any attorneys. Her subsequent arrest in October 2013 has not been an easy one for her as she was placed against her will in solitary confinement.

Solitary confinement in prisons in Iran can cause psychological problems for prisoners who are forced to stay in small cells that can include harsh conditions. Small cells, unsanitary conditions, vermin and temperatures that may be cold for prisoners are all part of what can be the experience for political prisoners who have been placed in solitary confinement in Evin Prison’s Section 209, described by those who have been there as a “prison within a prison.” Those who guard over prisoners in Section 209 are considered autonomous and dangerously not required to report any of their actions back to officials at Evin prison.

“We are equally disturbed by the regime’s ongoing campaign of repression against its own people. Such oppression has included the harassment and intimidation of family members of those who speak out for freedoms, the torture of political prisoners, and the limitation of freedom of expression and access to information. These acts of aggression have created a culture of fear in which few dare to voice dissent or challenge regime officials. Students, lawyers, journalists, and bloggers, ethnic and religious minorities, artists and human rights activists are all targets for abuse, intimidation, or discrimination,” said Wendy Sherman U.S. Under Secretary for Political Affairs in Washington, D.C. during a formal May 15, 2013 statement for the U.S. Senate Foreign Relations Committee.

Even though solitary confinement under Iran’s Organization of Prisons code Article 175 outlines that solitary confinement inside the region cannot legally go over 20 days, Shafi’Pour was forced to stay in solitary for over two months, an amount of time that is considered against the law in Iran.

In addition to heart problems, Maryam has also been suffering from extreme pain due to an untreated toothache, says human rights advocates at Amnesty International.

“The type of charges brought against Maryam and her treatment are reminiscent of the manner in which intelligence officials conducted themselves in 2009 [during the contested presidential election in Iran.] The way they have dealt with her is as if this case has been left behind from those days,” said Shafipour’s father in a recent interview with Iran-based website known as Kaleme.com.

“Maryam Safi’Pour is an student activist who has been engaged in peaceful political activities.  Her right to access higher education been violated,” continued WNN reporter Elahe Amani.”She has also been banned from continuing her education after studying agricultural engineering at the International University of Qazvin.”

Facing censorship after publishing personal statements related to rights advocacy in her blog, and due to her voluntary activities during the 2009 elections in Iran, Shafi’Pour was expelled from college during her eighth semester term. During the 2009 elections in Iran Shari’Pour help raise votes for former Iran Parliament Head Mehdi Karroubi’s election. Since 2011 Medhi Karroubi has been under house arrest in Iran.

Under detainment in 2010 Shafi’Pour received a one-year suspended prison term for her activities. The same charges were made against her by the Branch 15 of the Revolutionary Court in Tehran again in October 2013. With her recent January 1, 2014 court case postponement,  due to the court judge not showing up that day, Maryam continues to be caught under what human rights advocates call “unwarranted incarceration” under continuing human rights abuse.

An Amnesty International letter writing appeal, asking for Iranian authorities to drop the unjust charges made against Shafi’Pour, is now in process. The letter writing campaign is also asking that Maryam receive her full rights to attorneys as well as adequate medical care while incarcerated. The letter appeal is also asking for Shafi’Pour’s safety from torture and ill-treatment while incarcerated.

“For hours, days, I fixated on the patch of sunlight cast against my wall through those barred and grated windows. When, after five weeks, my knees buckled and I fell to the ground utterly broken, sobbing and rocking to the beat of my heart, it was the patch of sunlight that brought me back. Its slow creeping against the wall reminded me that the world did in fact turn and that time was something other than the stagnant pool my life was draining into,” describes former U.S. prisoner in Iran Shane Bauer in the November/December 2012 issue of Mother Jones magazine, as he outlined his own experience under 4 months of solitary confinement at Evin prison during his 26 months of incarceration there in 2009.