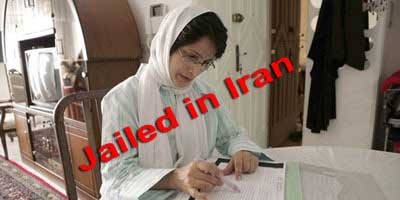 Human rights lawyer Nasrin Sotoudeh’s eyesight is deteriorating in prison, but she has not been granted any leave to visit an ophthalmologist, her husband Reza Khandan told the International Campaign for Human Rights in Iran.

“Each time I see her, she is using eyeglasses that are thicker than the last time. So far, no matter how much we have tried to take her to an eye specialist outside the prison, we have not succeeded. A few times we made doctor’s appointments, but she was not allowed to leave. Now, when she comes to a prison visit, I see that she is wearing eyeglasses with a high prescription, like old men. I am not worried about her eyeglasses. I am worried that, God forbid, there might have been damage to her eyes,” Khandan told the Campaign.

“Before going to prison, she was only using reading glasses, but after her first hunger strike two years ago, her vision problems started, and recently this problem intensified after her latest hunger strike,” he said.

“Her eyesight is measured in the prison infirmary, and then we are given a prescription to get the eyeglasses from the outside, and so far her prescription has changed several times,” Reza Khandan told the Campaign, adding that he could not remember Sotoudeh’s prescription prior to her imprisonment.

According to a report by Deutsche Welle, on April 14 Nasrin Sotoudeh became an honorary member and advisor to the board of trustees of the International Society for Human Rights in Germany.

Nasrin Sotoudeh, a lawyer and human rights activist who has represented many political, women’s rights, and student activists, was initially sentenced to 11 years in prison, 20 years’ ban on practicing law, and 20 years’ ban on foreign travel on charges of “acting against national security” and “propaganda against the regime.” An appeals court later shortened her prison sentence to six years.