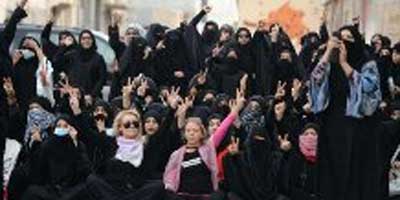 On February 14 2012, four foreigners were arrested for taking part in a peaceful women’s rights demonstration in Bahrain.

They were tear-gassed and shot at with rubber bullets, before being deported from the country.

Amongst the deported foreigners was an Irish national, Elaine Murtagh, who was visiting to observe the human rights abuses inflicted on Bahraini citizens. She spent her time befriending ordinary civilians who had been beaten and abused – tending to their wounds and encouraging them to seek help.

The sights she encountered during her brief visit will haunt her forever.

Bahrain is an archipelago of small islands situated West of the Persian Gulf and is governed by a constitutional monarchy, headed by King Hamad bin Isa Al Khalifa.

On 14 February 2011, inspired by the surge of revolutions spreading across the Middle East and led by a Facebook page entitled ‘Day of Rage in Bahrain’, the country erupted in protests.

Since then, human rights violations have been widespread across the country and democracy activists are frequently arrested, tortured and detained. The death toll of civilians killed by the government since the revolution began stands at 55, and Bahraini citizens continue to protest peacefully every day in their ongoing campaign for democracy.

Rachael Fulton spoke to Elaine Murtagh about her quest for human rights in Bahrain.

'I do not belong to any human rights organisation'

Tell us a bit about yourself - what's your job, where do you come from and what family do you have?

Elaine MurtaghMy name is Elaine Murtagh. I am a 40 year-old woman who lives in the West of Ireland. I am married and I have one son who is nearly 19 now (God, saying that makes me feel old!).

I work with people who have mental disabilities. They teach me about love, respect and trust and I truly love my job.

When did you first become involved in campaigning for human rights?

I do not belong to any human rights organisation and have never worked for any either, but I have always had an interest in people and most of all, I have been gifted with compassion for all people.

I have also been gifted with speech and have always been very opinionated.

'My son was born in Bahrain

What was your initial involvement in the events in Bahrain, and how did you come to visit the country?

I lived in Bahrain in the 90's, and my son was born there.

Last year, when the protests started, I was horrified at the killings and abuse that the people suffered, just because they had the strength to speak out for themselves. It was only on the TV every so often, so I joined Twitter and started tweeting these people.

I got to know them personally, and listened to many horrifying stories. I spoke with mothers, fathers, doctors, teachers, etc., all of whom have really suffered at the hands of the Al Khalifia family.

I suppose I was someone for them to talk to. In my own experience with life, it is very important for one in pain to be validated –  it only takes one person to listen to make another feel a bit better.

This was, and still is, my aim.

What are the main issues in Bahrain that need to be solved urgently?

The main issues in Bahrain are human rights abuses, especially against children.

These people are non-violent and need to be heard. Bahrain also need a proper policing system, as when the law breaks down, it is the people that suffer. There are a lot of political issues also.

My main concern is the people in the villages – the ordinary people just like you and me, who are so violently oppressed that they have no other outlet to express their emotions but to protest. They do this daily and peacefully, and then they get shot at with sound bombs, tear gas, and rubber bullets.

Saying that, there does not need to be a protest in a village for it to be submerged in tear gas, as this I witnessed this with my own eyes.

You were recently deported for taking part in the peaceful 14 February protest - please tell us how this situation unfolded.

I wanted to go visit Bahrain and I got the opportunity to go from 11th Feb to the 17th Feb. Although I had been very involved for a year with what was happening, I was not expecting what I saw.

I was very naive and innocent to the reality of living in the villages.

I arrived on a Sunday morning and was picked up at the airport after getting through immigration, no problem. I gave a false address, as I knew I would not get in by saying I was staying in the villages.

I arrived at my friend’s house, and later that day, I went out with her and some friends to observe them protesting in the village. I then witnessed the police entering the village by foot and shooting tear gas before removing the blockages the protestors had in place.

Once they removed them, the police jeeps sped into the village and chased people off the streets.

When I was moving from one house to the next, I was not expecting anything when suddenly, a police jeep came speeding up the street and chased me. I never ran as fast in all my life. I got into a house safely.

After a while, the police left and we came across a young 17 year-old boy who was beaten by police; he had a broken arm and I tried to treat this as best I could. I held his hand and wiped his tears, but what else could anyone do? He could not go to a hospital. I still think about him. Mohammed was his name.

On Monday there was a legal rally, so I wanted to go to this. When I went outside I had to completely cover myself, so we went through a few check points on our way, and the police were out in force, but the rally went ahead.

There were thousands there - all peaceful, and the atmosphere was electric.

Then all of a sudden, we were faced with police shooting at us tear gas and sound bombs and rubber bullets. My friend, a woman, stood in front of police, clouded in tear gas with her hands raised in the victory sign. I was screaming at her to run, but she would not move.

Suddenly, it hit me and I started to cry. She was taking back her power.

This image will never leave my mind.

I then started running down the road and had to jump a fence. Police were everywhere, coming at us from all directions.

I got shot at with tear gas, my eyes went blind – it’s like having a bottle of perfume poured into them. My skin was on fire and I could not breathe. I started to cry and shout, “Please help me! I can’t run because I can’t breathe!”

A man came from behind and picked me up and ran with me. He put me into a woman’s car, then my friend came down the road, and I went with her to her brother’s house where we were safe.

I will never forget how I felt.

I wanted to ring my husband, but with the shock, I could not even remember his name or his number!

Tuesday was the anniversary of the uprising of 14th Feb.

I was awoken at 6a.m. by shots of tear gas and helicopters overhead. I got up and spent the day going from house to house when it was safe ,and avoiding the large police presence in the village, who were both on foot and in armoured tanks.

I treated the injured with the woman I was staying with. This is how she spends her days: treating injured people with little medical equipment.

On that day I saw an elderly woman with two broken and bloody toes. Police had knocked on her door and when she opened it they fired the tear gas at her foot.

Another injury was a young man who was beaten so bad that I vomited when I saw him.

Another one was a young boy who jumped off a roof to escape police and had an open fracture in his ankle – his foot was so swollen it was the size of a rugby ball, but he still had not been able to get treatment in a hospital!

One woman’s son had his head blown open by gunfire

What else did you witness during your time in Bahrain that you believe the world should know?

I felt very depressed while I was there.

I was watched and suppressed the whole time, and I visited many mothers who had buried their sons. One woman’s son had his head blown open by gunfire, and the man that carried him to the hospital is now in prison for it.

Her other son I met was just out of prison for having a gas mask in his house.

They live with no roof on their home, and the police throw tear gas in every night. so they need to have masks. While I was there the police tear-gassed us while we were having dinner, and a few houses down, they broke in and stabbed up to seven young men.

It was a bloody scene.

That night, upon leaving and driving along the road, we were directly shot at in the car with tear gas.

We’re lucky they missed the windscreen.

On Thursday evening I met with Ali, a 16 year-old who had been kidnapped that day – his 3rd time to be kidnapped and cut with a knife all over his upper body, sexually assaulted, and dumped back on the street.

The men who did this then tweeted what they had done to him –  and named him.

I told him if he reported it to Bahrain Centre for Human Rights (BCHR) with Nabeel Rajab (President of BCHR), I would do something for him, and all the other children, so he did.

On Friday I led a women’s protest to stop the abuse of children in Bahrain. I felt I was releasing all my anger; I knew I would be arrested, and I didn't care.

I got arrested and deported, but I made my point –  and got a bit of media attention for these people.

Again, these ordinary people felt someone was listening to them, and although I can’t solve their problems, I can validate them. They know that they are important and that they matter, and isn’t that what we all need and want in this crazy world?

What can others across the world do to help the people of Bahrain?

I urge people to write about Bahrain and to bring these people’s stories to the attention of world leaders.

I want to make it so that every human is important in the world, regardless of their financial situation.

How has your work in human rights changed you as a person?

Doing this has changed me for the better.

I now see how privileged my own life is, and I feel I have been called to do this work by God –  for what reason I don’t know.

I do know and trust that I am meant to speak for the people of Bahrain and that I will go back, and I will continue to listen and love these people with all my heart.