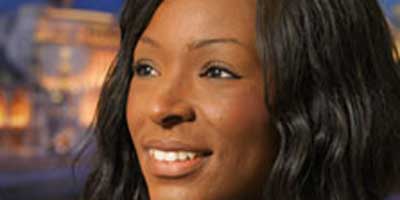 Bonike Erinle is a barrister in London, specialising in employment law. Over the summer, I was fortunate enough to spend a day shadowing her at work.

We got to talking about our shared interests in women’s rights, and the issues facing women in modern society. Bonike is very interested in contemporary women’s issues such as Female Genital Mutilation (FGM), and is keen to raise awareness of how these issues affect women in our country.

Bonike, I feel, represents determined, hard-working young women who are successful and make excellent role models for young women in the UK who want to defend the rights of others.

What first attracted you to the legal profession?

I grew up in a family of medics and lawyers so the legal profession was one of those that I first knew most about. As a Christian, I was naturally quite drawn to the notions of justice and equality, and saw myself as someone who would always argue for the 'underdog' when nobody else would (being the youngest of three, I was often forced to!).

I was good at expressing myself on paper and often liked to take up the role of
'teacher' when the occasion arose. When considering those things that I was 'most energetic about' as a young person, the job of a lawyer – particularly that of a barrister, was the clear choice for me. Watching programmes such as Kavanagh QC and Judge John Deed simply had the effect of cementing that decision for me!

How difficult is it to become a barrister?

There can be no doubt that becoming a barrister is a gruelling process. You've got to want it in a big way; if you do, the process will be easier. But it will still be hard. Reaching out to others who can give you direction is important, as well as focussing intensely on how to build up a relevant CV.

The period between the commencement of my undergraduate degree and qualification as a barrister took 8 years...That's a long time to stick it out!

How do you feel being a woman has affected your career so far? Do you feel there are still gender inequalities in the professional world, especially one as competitive as law?

I'm not sure if and, if so, to what extent being a woman has affected my career to date. I think being focused on an end goal helps to ensure that you're not side-tracked or preoccupied by things you can't change. The Bar is obviously still male-dominant, but that doesn’t mean to say that that's down to any particular role of 'negative' discrimination.

How effective do you think the legal system in this country is for defending human rights?

I'm not a Human Rights specialist so I can't comment on the nuances particular to our legal system; however, being a part of Europe, and having subscribed to the European Convention on Human Rights, the UK is in a much better position to protect its vulnerable than is quite clearly the case in other countries.

Why is it important to raise awareness about women’s rights in the UK?

The UK is a developed country, and it is right to say that those in developing countries will look to nations like ours for support and inspiration in the progression of their own infrastructures. It is therefore essential to acknowledge and promote the rights of women, both by practicing it in the UK ourselves and in encouraging its importance abroad.

What do you feel are the key issues facing women in our society?

In the UK, there are still outstanding issues in relation to equal pay. I read an article the other day, which suggested that the struggle to ensure equality for women in this regard was ceasing to have effect.

Pregnancy-related discrimination is also something that I have come across a fair amount as a result of my experience in employment law.

What role can barristers such as yourself play in tackling these issues?

Barristers are advocates, and are very good at finding ways to make sure their voices are heard! There will always be barristers who have gone before you who will have had experience in understanding what works and what doesn’t work in terms of tackling the issues at hand.

A great place for junior barristers like me to start is forums where barristers, solicitors, politicians, and business people get together to discuss: (i) the end goal, (ii) the current affairs, and (iii) what needs to be done at various points to achieve the end goal.

The more you attend such meetings, the better you will be able to understand the role you can play as an individual. You only need to spend 30 minutes on Google to discover that there are so many places you can start.

There has been an increased awareness in the media recently about female genital mutilation (FGM) in our country.   What do you feel is being done to tackle this issue, and what more can be done?

I attended a 2-hour long seminar on FGM a few months ago. It was brilliant; well-organised, and very comprehensive in the way in which it covered the issues.

We heard from medical experts, lawyers, and those running community-based projects with a view to educating women on the risks associated with this practice both in the UK and abroad. Such talks are becoming more commonplace, but if there was more government funding, they could probably be given more regularly and also to bigger organisations.

Since attending the seminar, I have certainly taken it upon myself to look at the ways in which I can be of assistance to relevant charitable organisations and am sure that the more people that are touched through the giving of such presentations, the more people that will be willing to play an active role in tackling the problem both in the UK and abroad.

On this topic, the government has been accused of inaction as a result of ‘political correctness’, i.e. not wanting to become embroiled in what is seen as a ‘cultural’ issue. Do you think this is a valid concern? Where do you think the line should be drawn between respecting the diverse cultures in our society and upholding universal humanitarian values?

I think it is a valid concern, yes, but not one that should be considered sufficient enough to result in complete inaction / ineffective action. What should be important to the government is making sure that it is backing the right type of organisations, which are comprised of the right type of people. Making this a priority will ensure that the issues are tackled sensitively yet effectively.

Of course, everyone has the right to have their culture respected, but when there are risks to the health and safety of those people practicing those cultures - of which they may not be aware - there is, in my view, a moral responsibility to make sure there is proper education. Once the facts are given, the choice to do or not to do will at least then be informed.

Further, when you are approached and spoken to about issues peculiar to your culture by someone of your culture, the education given is likely to be much better received.

What role do you think the individual can play in raising awareness about women’s rights issues in the UK?

By getting involved in incentives which are aimed at promoting women's rights.

There are plenty of them out there; it's just a question of looking for the right one, signing up, and then actually being ready and willing to help. Most professional bodies will have a women's group or association in the same way that there will be one for various different ethnic groups. Such groups might be a good starting point for those wanting to find out more.

What advice would you give to any young women wanting to pursue a similar career path as you?

Think carefully about why you want to pursue it. Once you are clear in your mind about why, consider the 'how'.

When you are convinced that the pursuit of that career is realistically going to be possible (i.e. because you've already looked into funding opportunities / scholarships / jobs for funding Bar School, for example), focus your vision on the end goal.

Hard work and sheer determination will get you there...eventually!