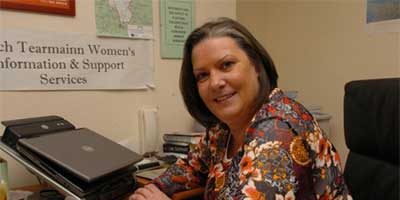 The funding for a state-of-the-art women’s refuge in Kildare has finally been agreed by the HSE. However, it falls short by €120k and as a result will only cover running costs to open two of the four apartments in the newly-built complex.

The Teach Tearmainn refuge, which is located in Kildare town, will provide a service for women and children in Kildare fleeing domestic violence. The building has been vacant since it was completed in January 2012.

It currently has four apartments available to families in need. An opening date is on the horizon, but has yet to be finalised.

“This project is constantly coming up against hurdles,” said manager Jacinta Carey. “Funding has been agreed by the HSE at €234,000 per year, but it falls short [of total requirements] by €120,000. We need €350,000 annually in order to run the shelter adequately and offer a safe service. As a result, only two apartments will open despite the fact the need for the four apartments exists. And that is not disputed by any state agency.”

A statement from the HSE, issued to the Leinster Leader, said that “Children and Family services welcome this development.”

It added that the HSE are “awaiting a meeting with Teach Tearmainn to finalise their proposal and agree an opening date”.

Ms Carey, however, said over the past two years Teach Tearmainn has had “so many meetings with the HSE” on this issue.

She added that past dealings with the HSE over the opening of the shelter has left Teach Tearmainn with “little confidence” that it will open any time soon.

“We met with the HSE in July,” she said. “Why did it take them over three months to tell us that we need another meeting?

“If the HSE were serious about keeping women and children safe, this facility would be open in its entirety. Each time we feel we have negotiated a deal with the HSE, obstacles are put in our way. The voluntary board are eager and willing to run with this and the state agencies need us. The money is there, it is how you chose to spend it.

“Violence against women and children, it seems, comes very far down on the list in this country. The government spent €14m on a referendum that would have kept us open for 40 years. Kildare County Council cannot enter into negotiations with us until a agreement with the HSE is made. If Teach Tearmainn were not providing this role in Kildare, no body else would.”

Homeless women and women with children can no longer stay overnight at a short-stay shelter in Newbridge run by the St Vincent De Paul (SVP).

Staff at Michael Garry House in Newbridge have been directed by the SVP national office to refer women and women with children to accommodation in a local B&B. A war of words broke out last week on the issue between staff at the shelter and SVP national office.

A call was made locally for SVP national management to continue financing Michael Garry House services for women and women with children until such a time as Teach Tearmainn opens in Kildare town.

This call was rejected, however, by SVP spokesperson, Jim Walsh, who maintained that the complex requirements of homeless men and homeless vulnerable women do not mix.