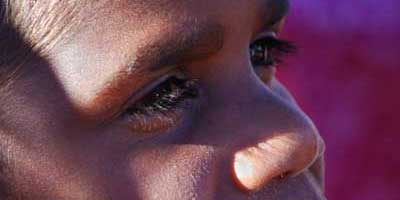 Traditional Aboriginal custom treats children as very sacred because they carry the two spring wells of water from the country within them.

The human body is also respected because of the spirit inside of it.

'A child is a gift to the entire kinship network and is highly valued.'

Australian Aboriginals believe that when the body is tampered with, as in the case of child sexual abuse, the perpetrator is tampering with spirits and causing a great deal of damage mentally, spiritually and emotionally for himself as well as for the victim.

A child is a gift to the entire kinship network and is highly valued.

Children are traditionally given constant affection, and child-rearing is shared by all those who have a responsibility to the child within the kinship network. Each of these people has their specific role essential to healthy child-rearing.

Then why is it that the prevalence of child sexual abuse in remote Australian Aboriginal communities far outweighs that of any other community in Australia?

Aboriginal people had a clear guide about good and bad behaviour, with discipline being strictly maintained by tribal elders.

Penalties ranged from physical beating, through ritual spearing and exile from the community, to death.

Traditional Aboriginal systems of incest prohibition remain the world’s foremost model; yet, in practice, most of the structure and discipline have fallen away, to the point where the abuse is committed with impunity.

Nationally, Aboriginal and Torres Strait Islander children are 7.5 times as likely to be the subject of substantiated reports of abuse than are other children.

In remote areas, the proportion of Indigenous people who reported family violence as a neighbourhood / community problem was almost three times as high as in non-remote areas.

Similarly, in remote areas Indigenous people were over three times more likely to report assault and / or sexual assault as neighbourhood / community problems.

It is hard for many people to imagine what it is like to live in a 'remote community'.

Remote Aboriginal communities vary in size from relatively small with populations under 100 people to larger communities over 1000 people.

The location of a community could have been determined in the past by a number of reasons. For example being near a cattle or sheep station – originally established as a mission, or it was just a convenient location for the non-Aboriginal bosses or managers.

This isolation comes with an attitude of not being connected to the rules and regulations of the rest of the state, thus developing a community’s own way of doing things.

In the 2001 census, there were 1139 remote Indigenous communities across Australia.

NO ANONYMITY FOR VICTIMS OF ABUSE

Within remote communities there is a great likelihood that both the victim and the offender in sexual abuse cases are known by all who live there.

A victim who accuses another person or persons of abusing them can cause divisiveness within the community. Speaking to someone outside the community asking for help can risk a loss of confidentiality due to the lack of anonymity within such a small community.

The perpetrator may be a father or a mother’s partner, a community leader or other high profile person.

Without anonymity, and with a lack of public or private transport to reach outside support, there can be no escape for the victim.

Aboriginal cultural beliefs often vary from Western knowledge regarding causes, explanations, and management of issues such as child sexual abuse. Blame can often be directed to the carer, or other culturally perceived cause of the abuse.

Blame can result in traditional punishment—sometimes referred to as payback.

'Generations of children were removed from their own parents'

Adults who are aware of sexually abused children often fear exposure and refuse to acknowledge publicly (and privately), that it is happening for fear of blame and payback.

Many Aboriginal and Torres Strait Islander women are also very sympathetic towards their men. They see them as so unhappy that they tell their children to forget about having been abused (which, of course, is impossible to do).

These women also fail to report the abuse and do not seek any help for the damage caused to their children.

In Far North Queensland and the Torres Strait Islands there have been incidents of violence, retribution and conflict when child sexual assault has been reported.

When the perpetrator is someone with power in the community (that is, who has a say as to who gets housing and who gets jobs), women have to leave; they are too scared to talk.

EFFECT OF THE STOLEN GENERATION

Multiple generations of children were removed from their own parents (The Stolen Generation) and have subsequently missed out on learning how to bring up children which, in many cases, finds the children neglected and unsupervised.

British colonisation of the country began in 1788 and included forced re-education of tribal people, genocide and the taking of tribal lands.

Aboriginal people were disadvantaged and the Australian government and her people are now rectifying the situation with boundless welfare support and acknowledgement of the horrific assault on her indigenous people.

Aboriginal groups are given rights and support services that are equal to, and in some instances, outweigh the support that Caucasian Australians are given, and they are treated with respect by all authoritative bodies.

In 2007 the NSW Government announced the Interagency Plan to Tackle Child Sexual Assault in Aboriginal Communities, 2006-2011. The Plan contains actions to prevent child sexual assault and to improve the way services are planned, coordinated and delivered to victims and their families across NSW.

There are many welfare agencies throughout Australia dealing specifically with Indigenous problems and implementing statewide plans such as the one in NSW, but in a remote community, that fact can be unknown due to the isolation of the area.

'Who is there to speak to confidentially when everyone in the community knows both victim and offender?'

Full television, radio, internet and telephone services are unavailable, so national media campaigns about child sexual abuse may not reach these areas.

For those who do know of services they can access, many prefer to go to another town for assistance because they want confidentiality, are scared, and want to protect their child from community pressures that would result from exposure.

Going to another town is not as easy as it may seem. Trips may be five or six hours by car, if a car is available.

When a woman or child is in an emotional state during the crisis, they want help, but in the length of time it takes to get to that help, often, things calm down and the momentum for intervention is lost – even though the problem and issues of safety still exist.

Children are walking the streets to get away from abuse in the home but, of course, they are also vulnerable outside the home.

Aboriginal children in isolated communities can be trapped in situations of prolonged abuse.

How can children, who have little power in any society, ever hope to escape this cycle of horror when they are living in almost complete isolation within a land as vast as Australia?

Who is there to speak to confidentially when everyone in the community knows both victim and offender?

WHO DO YOU TRUST TO HELP YOU?

Little children, as young as three and four, and in some shocking cases even younger are subjected to daily abuse, and yet, the subject has been spoken about only quietly, for fear of offence.

Guilt over past ‘stolen generation’ policies results in a national reluctance to protect at-risk Aboriginal children.

'Unfortunately, having minority rights does not seem to be helping abused Aboriginal women and children.'

In remote Australian Aboriginal communities, well-meaning governments have given justice back to some Aboriginal Elders to deal with offences in their traditional ways.

Aboriginal communities have the ‘group right’ to exclude outsiders including the media, thereby rendering the crimes unnoticed, unreported, and the norms that allow it, unchallenged.

Tribal justice systems firstly recognise adult male entitlement which protects perpetrators rather than abused children, so that those children (or the child’s advocate) who want help can be too frightened to seek it.

Unfortunately, having minority rights does not seem to be helping abused Aboriginal women and children.

Maryanne Sam wrote in Through Black Eyes: A Handbook of Family Violence in Aboriginal and Torres Strait Islander Communities:

To move forward, all Australians need to work collaboratively to find ways to overcome any hindrance to the care and protection of our children.

They are the future of our cultures, they are the upcoming generation of leaders, and they will carry with them these new attitudes to their own children.