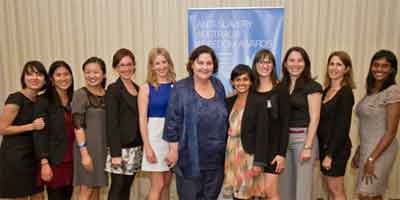 Anti-Slavery Australia is committed to eradicating human slavery and trafficking through:

Behind the organisation is a great team of people including researchers, lawyers, law students, volunteers and the director who are dedicated to eradicating slavery in Australia, from running educational and outreach programs, to writing submissions for government enquiries.

Related Article: 'Now I Have Freedom!' - By Jennifer Burn, Director of Anti-Slavery Australia

I met with some of the members of the team at the University of Technology, Sydney, where the organisation is based, to learn more about their work:

Director of Anti-Slavery Australia, Professor Jennifer Burn, is an immigration and administrative law specialist. She recently participated as a keynote speaker at the Immigrant and Refugee Women’s Network’s Annual Symposium, as part of the 16 Days of Activism against Gender Violence campaign in Fairfield, Sydney.

Forced marriage is an emerging issue in Australia and Anti-Slavery Australia has been at the forefront of advocacy to recommend criminalisation of forced marriage within a broader response that includes community outreach and non-legislative support.

Jennifer Burn told me about a seminar they held In September, in collaboration with a local organisation working with youth and family - Rosemount Good Shepherd.

"The seminar provided an opportunity for community NGOs, immigrant support agencies and others working in the area to discuss what forced marriage looks like, how it emerges and presents and how forced marriage can also be present within other kinds of practices such as domestic violence or domestic servitude.

Slavery in Australia is just as relevant as in any other country, although its prevalence is not as well-known as in many countries. There is still a lot of awareness-raising to be done.

Vicky Boutas is project manager for the creation of an online training course, funded by the Australian Government:

It is to provide a training course and an information tool to raise awareness about what is trafficking, what it looks like, and what the international laws are, among other themes.

The idea is that by spreading awareness this way – particularly to the front line – it will increase awareness, reporting and investigation into trafficking and make it more transparent for those potentially coming into contact with it day-to-day.

We also conducted a legal needs analysis – asking stakeholders about their experiences of legal needs for those in specific groups, people that may have bee trafficked or subject to slavery”.

“My work is mainly representing clients of the law practice that is a part of Anti-Slavery Australia.

Many of our clients have been trafficked into Australia or subject to practices of slavery within the country, and we help them deal with legal issues including immigration, compensation and employment matters.”

“I mainly assist with casework that involves meeting clients, doing regular updates on cases and preparing material in support of their applications.

We help our clients settle in Australia if they feel that going back to their home country would be too dangerous”.

Arani is one of the researchers for Anti-Slavery Australia: “I have been focusing on drafting submissions to recent Government enquiries into slavery, slavery-like conditions and people trafficking.”

The majority of trafficked people come into the country from South-East Asian countries including Thailand, China, South Korea, Malaysia and Vietnam.

Most reported instances of trafficking have occurred in the commercial sex industry, including sexual servitude and slavery, although there are now more reported cases of labour trafficking in other areas such as in restaurants, factories, and private homes.

Recognition of Those Working to End Slavery

“I coordinate events, projects and the administration of Anti-Slavery Australia.

One of our major annual events is the Anti-Slavery Australia Freedom Awards.  These awards are a great opportunity to celebrate and recognise the hard work and dedication of organisations and individuals working in NGOs, law enforcement groups and community support programs in what can be a fairly serious area of work.

This year we gave out awards to Rebecca Corby, (Australian Federal Police) and  Dr Mark Zirnsak (Justice & International Mission, Uniting Church Australia), for their outstanding contributions to the areas of human trafficking, especially protection of victims of trafficking, ethical consumerism and advocacy.

The awards were held at UTS and over 60 guests attended to celebrate with us.  We first held the awards in 2011 at Parliament House in Canberra and we hope to continue holding these awards each year because everyone works very hard and it’s important that we recognise these people who have dedicated themselves to this work and made an incredible contribution."

Overall, Anti-Slavery Australia is a very important and significant organisation in the area of human trafficking and slavery.