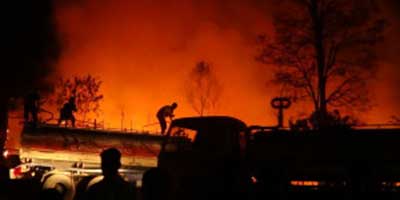 Tonight at around 9.30 in the evening a fire broke out in Zone B Section 4 and 5 at Mae La Refugee Camp on the Thai Burma Border in Thailand’s Tak Province. It was estimated that more than 30 shelters were destroyed.

“We were asleep. Most people were in bed. We heard the camp announcement and people screaming. We just grabbed the baby and ran.”

“It started near the main road. It’s hard to estimate how many houses are burning, but I guess it’s at the very least 30 houses are destroyed”

Eyewitnesses also said there is a possibility a warehouse storing materials for refugees may have been partially destroyed by the fire.

Around 10: 10 pm the camp residents and a local Thai fire truck had the fire under control.

According to Thai environmental officials Tak Province is currently one of the worst affected regions plagued by forest fires.

Fires have been a constant and recurring danger in Thailand’s nine refugee camps, where almost 130,000 refugees live. The homes of camp residents are made of wood or bamboo and roofs are covered with dry leaves.

It can be recalled that in February 2012 a fire in Umpiem Mai refugee camp that destroyed more than 1,000 homes affecting 4,400 refugees. Another fire in December 2013 destroyed approximately 120 homes in Thailand’s largest refugee camp, Mae La, leaving 600 refugees homeless.

Earlier that year, in March, a tragic fire swept more than 300 refugee shelters in Ban Mae Surin refugee camp that claimed the lives of 37 Karenni refugees.