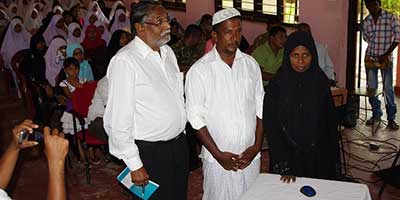 A year ago today, Rizana Nafeek a young Sri Lankan maid was executed in Saudi Arabia despite a world-wide campaign.
The Rizana Nafeek Foundation, set up in her name after the tragic event, has made the following statement.

The world came to a stand still for a moment this day last year. Shocked and grieved. That is the day when an innocent young girl was mercilessly executed.

Yes that is Rizana Nafeek. A name that is synonymous with women’s rights, abject poverty and inhumane treatment. Her execution drew worldwide condemnation and an outpouring of sympathy from all over the world, beyond race, religion and nationality.

The loss of a valuable innocent life and the lack of dignity for women compels us to rise from the comfort of our daily lives and take a stand against human trafficking, the failure to secure the legal rights of Sri Lankan nationals abroad, the exploitation of women.

Robbed of her youth, freedom and dignity, Rizana was a victim of circumstance; an immigrant, a maid, and a child- exploited by traffickers and a legal system predisposed against her. Did we learn anything from this?
Did we take as a cultured society any action to prevent such incident to happen again. Already her tragic tale is fading into a distant memory in the collective minds of our society.

For another incident such as this to occur due to our inaction would be a shame to her legacy. We need to defend the rights of women and ensure their safety. We need to work together before it is too late, before there is another Rizana Nafeek.

There was a lacklustre progress in preventing women going as a domestic worker soon after the incident. But it has revamped again demonstrating the society has learned no lesson from it.

Why do women migrate?

Many innocent women travel to faraway lands with the hope of changing their lot in life, not knowing the real working conditions and the rules and regulations of the countries they migrate to for employment. The jobs of a house maid do not bring respect, dignity or credit to their family, society or the country at large. With the pursuit of money comes the cost of a disintegrated family, misguided children, women and men. Divorce, addiction to drug, extra marital affairs are common among the families. The wellbeing of one’s family far outweighs this money, which is only helpful in the short-term and is often misused by their husbands. In the end the entire family suffer. Are we going to stand by and simply be onlookers and allow the degradation of our society or rise against it?

In a way we are also partly responsible for this. We do not have a system to address poverty, dowry and unemployment problem. On the other hand the state and the regulatory body do not have sound legal frame work to protect them. The degree of interest shown in earning foreign exchange from their sweat and blood far exceed the interest shown on their welfare and security. This is indeed a sorry state of an affair.

Migrant workers especially domestic workers are the backbone of the foreign exchange revenue and the Government should take meaningful action to look into their grievance.

The RizanaNafeek Foundation (RNF) has been formed in order to protect women from becoming victims of malevolent forces, to protect their rights, safety and dignity, to encourage them to stand on their own feet and show them how to lead a respectable life. A data collection on the victims of migrant workers is in progress and there are instances the foundation has come across some of the migrant workers are without any intercourse with their family for even 16, 17 years.

Their tale will move even the stone heart. Recruiting agents and their subs agents are the main culprit whose sole purpose is money. The Government should have a mechanism to monitor this in the village level and educate the public to report while taking stern action against those responsible.

The tales of those victims further emphasise the role of foreign employment bureau to be more efficient and focussed than the current level. Some of the chronic problems such as law wages, hard labour, physical abuse and mental trauma due to this must be rectified as otherwise it will end up in loss of lives as we are witnessing now. Those fallen victims must be duly compensated and the welfare of their families taken care of.

Above all tough regulation must be enacted to protect domestic workers. The ministry of foreign employment has recently introduced some new directives which will protect them to some extent. However that is not enough. Given the current scenario more virulent and tough penalties against those responsible only will save our domestic workers.

Let us all get together and protect them and pray for their wellbeing.