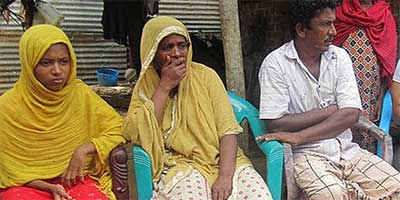 The two foreign employment sub agents who are alleged to have sent Rizana Nafeek to Saudi Arabia for employment were sentenced to two years rigorous imprisonment and ordered to pay Rs.60,000 each as compensation to her parents.

Rizana Nafeek while still underage was sent as a housemaid to Saudi Arabia with the help of forged documents.

She has been sentenced to death over the death of her employers’ baby daughter.

Defence Counsel Weerasena Ranahewa and Mohmed Nassar appearing for Mohamadu Abdul Latiff and Packeer Mohideen Wajurdeen pleaded guilty to the charges and asked Colombo High Court Judge Sunil Rajapaksa to mitigate the sentence on the two accused. The case was postponed for January 24 when the case against the third accused Kamsa Lebbe Abdul Salam is to be taken up.

Senior State Counsel Deleepa Pieris told court that Rizana Nafeek, was sent to Saudi Arabia on forged documents and she was presently on death row and her fate was solely dependent on the action taken against the accused by the Sri Lankan government.

He said the international community was closely watching the case. Mr. Pieris led the evidence of Rizana’s parents – mother Seyadu Ahamadu Fareena and father Mohamed Nafeek who testified in the High court. A police team under the direction of SP Jayasuriya of the CID Human Traffic Unit conducted investigations following a complaint made by Ms. Ahamadu Fareena.

Rizana was sentenced to be beheaded according to Saudi Law for the killing of 17-month-old infant of her employer. The baby is alleged to have choked while being bottle fed.

The Attorney General indicted the suspects for helping to send Rizana Nafeek with the use of a forged birth certificate to Saudi Arabia to work as a housemaid.