Bringing light to the poor, one liter at a time 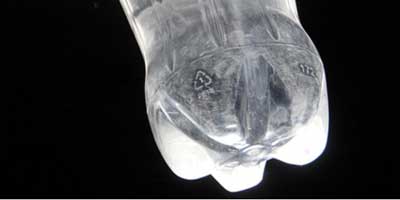 Bringing light to the poor, one litre at a time

Plastic bottles jut from the roofs in one Manila slum neighborhood, mushrooming across rows and rows of shanty homes. But they aren't just bottles -- they bring light.

Using the simplest of technologies to brighten dim and dreary shanties, the bottles, which contain bleach and water, are placed snugly into a purpose-built hole in the roof. They reflect sunlight and spread it through the room beneath.

As a result, the project called "Isang Litrong Liwanag," which means A Liter of Light, helps some of the poorest Philippines residents save money and live better -- in a renewable way.

"If you can make a grassroots revolution wherein each and every person can have an improvement of life with green technology, then that little -- if added together -- can cumulatively improve... Filipino living," said Iliac Diaz, an eco-entrepreneur who launched the project.

"So A Liter of Light lights up the house, saves a lot but at the same time improves the standard of living across the board, of the bottom 90 percent of this country."

The idea was influenced by similar endeavors in the Middle East and Brazil, as well as by a project by a group of students at the Massachusetts Institute of Technology.

More than 10,000 of the bottle lights have been installed across metropolitan Manila and the nearby province of Laguna in the last three months through the efforts of low income communities, local governments and private partners.

"'That's only water?' my neighbors were asking. 'That's only water,' I said to them," said Erlinda Densing, a mother of eight whose 20-meter-square home is now illuminated by a bottle light as bright as a light bulb.

The light can be built and installed in under an hour.

First, a hole is cut in a corrugated iron sheet, and a one-liter plastic bottle that has been filled with water and about four teaspoons of bleach is inserted. A hole is cut in the house's roof, the bottle is put in, and then the iron sheet is fixed to the roof with rivets and sealant.

"Unlike a hole in which the light will travel in a straight line, the water will refract it to go vertical, horizontal, 360 degrees of 55 watts to 60 watts of clear light, almost ten months of the year," Diaz said.

The bottles emit clear light for about five years, since the bleach inside prevents the buildup of algae in the water.

Lileta Paningbatan, a mother of five, and her husband had four of the "bulbs" installed in their home, and two in the small store they run, in May.

"When we didn't have these, it was impossible not to turn on the lights during the day," said Paningbatan, who hopes to save on monthly electric bills that can run to 1,000 pesos ($23).

"Now, as you see, it's daytime, it's bright even if we don't turn on the fluorescent lights."

With the Philippines dependent on fossil fuel and coal for most of its energy needs, the government is making a push for renewable energy in the face of growing demand, adding to the appeal of projects like A Liter of Light.

Earlier this month more than 200 volunteers from schools and private companies donned gloves and began building bottle lights for residents in the Manila slum community of Pavatas, which sits beside a nine-storey high garbage dump.

The 2,000 families who live there pay around 800 pesos ($18) a month for electricity, a large chunk of their income, and say that any savings on these bills will allow them to eat better.

"It's a big deal," said Manuel Pilande, a Payatas resident who uses a light bottle in his store. "You can buy a kilo of rice, and even have fish with your meal.