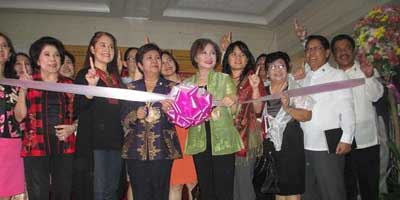 A Call to Rise for Justice, Rising Against Poverty, Injustice and the Impunity that Spawns Violence Against Women and Children

November 25, 2013: National Consciousness Day for the Elimination of Violence Against Women and Children

I rise today on a personal and collective privilege as we commemorate today for the first time in our country, November 25 as the National Consciousness Day for the Elimination of Violence Against Women.

By virtue of Republic Act 10398, local governments, various government agencies and departments are enjoined in marking November 25 as the National Consciousness Day to Eliminate All Forms of Violence Against Women. The Philippines officially now joins the international community, to commemorate this fateful day as IDEVAW.

What started as a people’s protest against the deaths of Minerva, Patria and Teresa Mirabal who died fighting the Trujillo Dictatorship in the Dominican Republic in the 1960s, the movement against the state-inflicted persecution and death of the Mirabal sisters in Latin America has evolved towards a global effort to end discrimination and violence against women and children.

In the Philippines, various women’s organizations including GABRIELA and Gabriela Women’s Party have long been initiating efforts toward the commemoration of IDEVAW and raising people’s awareness toward the significance of this day.

Finally, after roughly 10 years when then Gabriela Women’s Party Representative Liza Maza first filed this measure during the 13th Congress, and consequently in the 14thand 15th Congresses with Rep. Emmi De Jesus and this representation and with Sen. Pia Cayetano’s efforts in the Senate, RA 10398 was finally signed into law on March 19 of this year.

Mr. Speaker, dear colleagues, this year’s commemoration is significant as it is timely. Despite continuing efforts to fight violence against women and children on various fronts we remain witness to an increasing number of cases.

In 2012, the Philippine National Police Women and Children Protection Center reported 15,969 cases of VAWC and 5,180 cases of rape and attempted rape. Of the reported rape and attempted rape cases, 3861 involved children and minors. The PNP-WCPC likewise reports 249 cases of trafficking. On the ground various women and children’s advocacy groups like Talikala Foundation in Davao City estimate at least 800,000 to 1 Million prostituted women and children in the Philippines. At least 20% of them are children and minors below 18 years old.

Recently, Dutch NGO Terre des Hommes’ online project managed to expose over 20,000 and track some 1,000 pedophiles through “Sweetie” a virtual 10 year old Filipino girl. While Sweetie may be virtual or not real, we all know that there are tens and thousands of real Sweeties in the Philippines. Underlying Sweetie’s credibility as a subject in this project is the reality of poverty in the Philippines that forces women and girls to be victims of cyber prostitution.

In relation to this, Gabriela Women’s Party has filed House Resolution 453 to look into the Terre Des Hommes project and the prevalence of child pornography, and cyber prostitution in the Philippines.

This is also the reason we must investigate reports of rape, in areas worst hit by disaster and calamity like Leyte and Samar and look into reports of trafficking in Zamboanga.

We cannot underscore enough the vulnerability of children to gender violence, prostitution and trafficking. Several studies including that of international NGO, Save the Children reveal that after the 2004 Indian Ocean tsunami and the 2010 earthquake in Haiti, unknown numbers of orphaned children were kidnapped in Indonesia, Sri lanka and Haiti by child trafficking gangs.

Amid poverty, landlessness, unemployment exacerbated by the onslaught of natural and manmade disasters; the deprivation of basic social services, unsolved and worsening corruption and amid impunity and injustice; and the still pervasive view of women as commodities and objects of sex, women and children will remain vulnerable to violence.

An equally undeniable factor in the increase in the number of VAWC cases is injustice and impunity.

This culture of impunity is further cultivated and violence against women proliferate as fewer perpetrators are convicted and policies that give persons in authority the license to rape, abuse and violate continue.

We have filed various bills to introduce amendments and improve existing laws addressing violence including that of the Anti-Rape Law, Anti-Sexual Harassment Act and the Anti-Violence Against Women and Children.

Moreover, beyond the creation of policy and legislation, we also enjoin each and everyone to bring up the ante in the fight against violence against women and children.

We call on our colleagues to join us in rising for justice and initiating efforts among our constituencies and local districts in combating violence. Let us all take an active role in ensuring the implementation of laws and initiating dialogues toward the protection of women and children against abuse and other forms of violence.

The struggle to end poverty and injustice is intrinsic and vital in the struggle to end violence. In as much as we are working towards raising women, children and men’s awareness against violence, we must also organize women in the grassroots and together, let us all work towards putting an end to the poverty, the impunity and injustice-- the factors that spawn, breed and cultivate violence against women and children.

The challenge remains great and the climb tremendously uphill. But we have our determination and our unity to propel us as we inch towards efforts to put an end to violence against women and children.