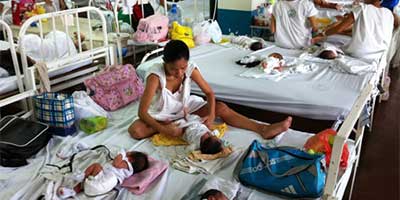 Mothers and their children at the maternity ward of the Jose Fabella Memorial Hospital, a government hospital in Manila, Philippines. | Photo: Carlos Conde/Human Rights Watch

The Philippines’ expected passage of a reproductive health law will be a massive step forward to promote women’s health and lives, Human Rights Watch said today.

The prime objectives of the Reproductive Health Bill, which is scheduled for a final vote during the week of December 17, 2012, include increasing access to a range of reproductive health services and reducing maternal deaths.

The bill, first filed in Congress more than a decade ago, was ignored by lawmakers for years because of strong opposition led by the Roman Catholic Church. President Benigno Aquino III, facing calls from Catholic bishops for his excommunication for supporting the law, certified the bill as “urgent” on December 13, expediting the vote in Congress.

“The Reproductive Health Bill will have profound implications for improving the health and lives of women throughout the country,” said Carlos Conde, Asia researcher. “The Aquino administration should be credited for having the political will to muster support for the bill in Congress despite the threat of a political backlash.”

Should the bill be approved by the House of Representatives on its third and final reading, as well as by the Senate, a draft law that harmonizes the Senate and House versions will be submitted to Aquino for his signature.

The Reproductive Health Bill seeks to integrate the government's responsible parenthood and family planning efforts into all of its anti-poverty and development programs. It mandates the Health Department to lead the procurement and distribution of reproductive health care services and supplies. It provides for a more efficient system of maternal death review to decrease the incidence of maternal mortality.

The bill also requires age-appropriate sexuality education up through high school. It categorizes all products and supplies for modern family planning as “essential,” meaning they must be available at all hospitals and clinics. The bill also increases the pay of health workers in villages across the country.

According to the United Nations Population Fund, 3.4 million pregnancies occur in the Philippines every year. Half of those pregnancies are unintended while a third are aborted, often in clandestine, unsafe, and unsanitary procedures by nonprofessionals.

Abortion is illegal in the Philippines, the largest Roman Catholic country in Asia. The bill does not amend the penal code prohibition on abortion, but addresses post-abortion care standards.

The Population Fund estimates that there are 11 deaths of women from pregnancy-related causes every day in the Philippines and that “most of them could have been avoided in a well-functioning health care delivery system.” It said “maternal health conditions are the leading causes of burden of disease” among Filipino women.

“The Aquino administration should waste no time in carrying out the reproductive health law once it passes,” Conde said. “Many Filipino women have faced difficulties and sometimes death because of the absence of a comprehensive and consistent reproductive health policy. This law can change that.”

Reproductive health programs faltered because of opposition from the Catholic Church and conservative groups. Some local governments have passed local ordinances that banned the sale of condoms and contraceptives and forbid their distribution in government clinics, where most poor Filipinos turn for health care. Human Rights Watch documented the impact of such bans, particularly on the poor, in a 2004 report, “Unprotected: Sex, Condoms, and the Right to Health.” The Reproductive Health Bill, if passed, will revoke these ordinances.

“Too many Filipinos have long suffered from inadequate reproductive health policies, with the poor being hardest hit,” Conde said. “This bill marks the start of an era in which public policies can save lives, promote healthy family planning, and respect human rights.”