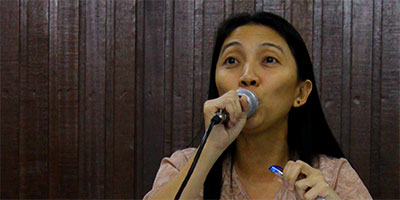 Prima Jesusa Quinsayas has been a private prosecutor in the most notorious cases of media killings in the Philippines, including for the witnesses and families of the journalists killed in the world's worst attack on the press in recent history: the 2009 Ampatuan massacre.

A number of her clients have been indirectly threatened with death, bribed to change their testimony, and persuaded to drop Quinsayas as legal counsel. Witnesses have had libel and other trumped-up charges brought against them and have had their homes destroyed. Some of them have even been killed.

Three years after the Ampatuan massacre, in which 58 people – including 32 journalists and media workers – were slaughtered while travelling in an election convoy, numerous motions and petitions every week continue to delay the legal proceedings. Only eight of the 102 suspects arrested in connection with the case are prime suspects. And of the eight, only two have been formally charged. Not a single suspect has been convicted. Justice remains elusive for the massacre's victims and their families.

Trying to find eyewitnesses to the massacre puts Quinsayas herself at risk. Over the past few years, she's been followed by unmarked cars, has spotted vehicles lurking around her apartment, and received threatening text messages.

Police have told her to take extra caution when leaving the college where she used to work in Manila, claiming that a vehicle allegedly identified with the Ampatuans had been seen in the vicinity of the school.

Quinsayas plays the threats down. She's not the only lawyer facing threats, and other prosecutors have faced worse, she says. And despite the protracted criminal proceedings, and the country's entrenched culture of impunity, she feels that justice will eventually triumph.

"Otherwise I have no business being a private prosecutor," she says.

Prima Jesusa Quinsayas on why, despite the threats, she works as a private prosecutor on some of the most notorious cases of media killings in the Philippines

"If truth be told, I am hesitant to share my own personal experiences about what it's like to be a private prosecutor on cases of media killings.

I entered the legal profession willingly and took on the work as a criminal litigation lawyer fully aware of what it entails. I have to admit the threats I've received are not a "classic example" of what a prosecutor in the Philippines has had to face. Others have faced worse. It is an inherent part of the work.

Yet, the non-lawyer side of me says no one should be threatened simply for doing her job. Journalists should not be killed for a news story they wrote, aired or produced. And lawyers should not be subjected to threats because of the cases they handle.

The death of one vital witness and the killing of a security escort of another witness in the Ampatuan massacre case persuaded me that it is time more people know about how much is at stake when a journalist is killed. Other lives are literally on the line.

For the witnesses who are still alive, their lives have changed drastically. Their mobility is very limited. They have to take extra precaution about where they go, who they deal with and what they do. The accused who have managed to elude arrest enjoy far more freedom than the witnesses who have chosen to speak the truth.

It is unfortunate that prosecutors have to actively participate in locating witnesses and securing pieces of evidence if they want to get a conviction. In theory, this is the job of police investigators. But the quality of police investigations leaves much to be desired. While the Philippine National Police has some of the most dedicated men and women in its force, a lack of resources has not made it possible for them to undergo exhaustive training on how to conduct efficient criminal investigations.

Thus, as a prosecutor, I am forced to do legwork, such as looking for possible witnesses and convincing them to testify in court. One of the first things witnesses ask is whether their safety will be compromised.

Sadly, I have never been able to assure them outright that they will be safe. Instead, I often find myself appealing to their sense of truth and justice." 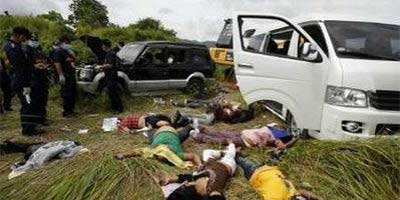 The Maguindanao massacre, also known as the Ampatuan massacre after the town where the mass graves were found, occurred on the morning of November 23, 2009, in the town of Ampatuan in Maguindanao province, on the island of Mindanao in the Philippines.

While the victims were on their way to file a certificate of candidacy for Esmael Mangudadatu, vice mayor of Buluan town, they were kidnapped and brutally killed. Mangudadatu was challenging Datu Unsay mayor Andal Ampatuan, Jr., son of the incumbent Maguindanao governor Andal Ampatuan, Sr., in the forthcoming Maguindanao governatorial election, part of the national elections in 2010.

The 58 people killed included Mangudadatu's wife, his two sisters, journalists, lawyers, aides, and motorists who were witnesses or were mistakenly identified as part of the convoy.

Buluan Vice Mayor Esmael "Toto" Mangudadatu invited 37 journalists to cover the scheduled filing of his certificate of candidacy (COC) at the Commission on Elections provincial office in Shariff Aguak. He said reports had reached him that his rivals had threatened to chop him into pieces once he filed his COC, and felt the presence of journalists would deter such an attack.

A local report stated that at about 9:00 AM, a convoy of six vehicles carrying journalists, lawyers, and relatives of Vice Mayor Mangudadatu left Buluan to file his COC at the Comelec office in Shariff Aguak. The convoy was composed of six vehicles: four Toyota Grandia vans (one grey, one green, and two white) owned by the Mangudadatu family; and two media vehicles – a Pajero owned by DZRH broadcast journalist Henry Araneta and a Mitsubishi L-300 van owned by UNTV. There was a seventh vehicle, a Grandia boarded by mediamen, but it lagged behind and decided to turn around once the passengers sensed what was happening.

There were two other vehicles that were not part of the convoy but happened to be traveling on the same highway: a red Toyota Vios and a light blue Toyota Tamaraw FX. The Vios had five passengers: Eduardo Lechonsito, a government employee who was bound for a hospital in Cotabato City after suffering a mild stroke Monday morning. He was with his wife Cecille, co-workers Mercy Palabrica and Daryll delos Reyes, and driver Wilhelm Palabrica. The FX was driven by Anthony Ridao, employee of the National Statistics Coordination Board, and son of Cotabato City councilor Marino Ridao.

Before reaching its destination (about 10 km from Shariff Aguak, four on other versions), the convoy was stopped by 100 armed men, who abducted and later killed most or all of its members.

There is evidence that at least five of the female victims, four of them journalists, were raped before being killed, while "practically all" of the women had been shot in their genitals and beheaded.

Mangudadatu's youngest sister and aunt were both pregnant at the time of their murders.