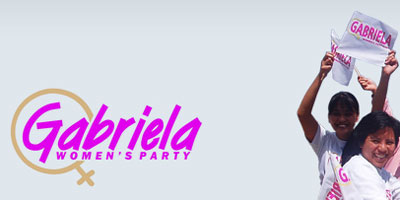 The two representatives of Gabriela Women’s Party Luz Ilagan and Emmi de Jesus accompanied a minor who alleged that she was raped by Pantabangan, Nueva Ecija vice mayor Romeo R. Borja as she filed a case at the Department of Justice (DOJ).

The 18-year old “Jasmin” accused the official of repeatedly raping her since June 2011. She said Borja threatened to kill her and her family if she refused to give in to him. Jasmin is now eight months pregnant with Borja’s child.

In her complaint affidavit, Jasmin said she first met Borja in April 2010 at a local beauty pageant where she was a contestant and eventual winner. She said Borja wanted her to have a relationship with him, but she rejected his advances because she knew that he was married.

In June 2011, she said she went to a friend’s house where she took an alcoholic beverage, and soon after lost consciousness. When she woke up, Jasmin said, she found herself being raped by the government official.

Jasmin alleged that the official raped her several more times on different occasions and she was powerless against stopping Borja because as she said, the official blackmailed her. Borja allegedly threatened to expose what happened by posting naked pictures of her on Facebook and other social networking sites. 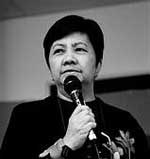 Congressional Representative Luzviminda Calolot Ilagan from Gabriela Women's PartyIlagan decried the rape and said the alleged perpetrator should not be allowed to escape justice just because he is a government official.

“The alleged rapist, powerful and wealthy as he and his family may be, must be made accountable for this heinous crime. We must continue to rage against rape especially if the accused is a public official who use and abuse their power to inflict violence, ” she said.

According to Jasmin, she draws strength from her resolve to seek justice and from the support given to her.

“Borja should be made to answer to the law. I came out and filed a case against him so that he will be punished for what he has done to me and so that he be stopped repeating his violations against other women,” she said.

In the meantime, another alleged victim of the vice mayor also joined Jasmin’s quest for justice.

“Mina,” a former helper in the Borja household has already filed a rape case in Cabanatuan City, Nueva Ecija and the case is awaiting decision. She is now a mother to Borja’s baby.

“I fully support Jasmin in her fight for justice. Like Jasmin, I too am a victim of vice mayor Borja’s sexual abuse. What he did to us should not go unpunished,” she said

Based on initial reports from the Gabriela Women’s Party chapters in Nueva Ecija, Jasmin and Mina were not the only victims in the small Nueva Ecija town. 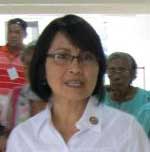 Congressional Representative Emmi-De-Jesus from Gabriela Women's PartyThe two women appealed to other victims to step forward and join them as they call for the vice mayor’s removal from office and prosecution for his alleged crimes.

“We call on the other victims to stand up and fight for your rights. We encourage you to join us in our fight for justice,” the two women said in Filipino.

De Jesus said rapists in government offices can and will offer bribes, threaten families, destroy reputations and buy out judges as they try to escape accountability for their crimes.

The two lawmakers said the victims of rape will be facing a long and difficult struggle because they are facing a powerful opponent.

“They can, however, be assured that Gabriela will support them every step of the way,” they said.

Gabriela Women’s Party has issued a call to all particularly residents of Pantabangan, Nueva Ecija to support the two alleged rape victims and demand justice for them against Borja