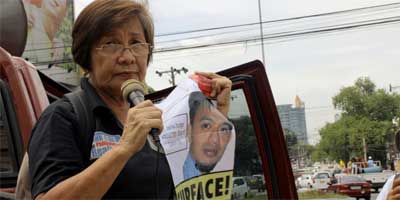 In the Philippines, a mother commemorates five years since her son 'disappeared'  - allegedly abducted by military agents.

Throughout the five years that she has been searching for her “disappeared” son, Edita Burgos says she has already scaled down her expectations, from calling for justice to just wanting to find out the truth about what happened to him.

“My standards have gone down through the years.

Whereas before, I’d say ‘Give him back to me alive and well, and let justice be served.’

Now I just want to find out what really happened.

Because if I find out the truth, I’ll also find him.

It’s not even closure that I want. I just want to know what I’ll pray for.”

Family and friends who will be joining Edita in marking the fifth year of Jonas Burgos’ disappearance on Saturday are nowhere near finding the truth of what happened to him, his whereabouts or of obtaining justice for him. 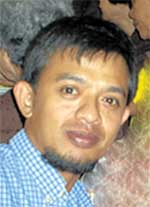 Jonas is the middle son of Edita and the late Jose Burgos Jr., the legendary founder and editor of the Malaya newspaper.

Since April 28, 2007, when Jonas, then a 37-year-old agriculturist, was seized allegedly by military agents in a Quezon City mall, the Burgos family has gone to court,  the Commission on Human Rights (CHR) and even the United Nations seeking to hold the military accountable.

The family’s petitions for a writ of amparo and writ of habeas corpus are being heard by the Court of Appeals, which recently denied a motion for disclosure of the suspects’ summary of information (SOI). The military opposed the public disclosure of the SOI.

The Department of Justice is conducting a preliminary investigation on the kidnapping and illegal detention charges against Lt. Harry Baliaga Jr., who was identified by the CHR as one of those who abducted Jonas.

From Day One, it has been a “series of cover-ups” and stonewalling by the military, which defied the Supreme Court’s order to find Jonas by merely claiming he was not in their custody, according to Edita.

“I can’t say there’s absolute trust in the courts. I believe in a higher court and in a higher law. There’s little hope I can see in man’s institutions.”

Yet, Edita, a  secular member of the Secular Order of Discalced Carmelites, is buoyed by the support of “parallel groups,” including the media, nongovernment organizations, artists and human rights defenders, and families of desaparecidos (the disappeared), and plods on.

“With them, there is so much hope. Because along with us, they haven’t given up.”

And how does she think Jonas would feel if she quits in her search for justice?

“If Jonas were alive, and learned that I’ve given up looking for him, what would he feel? That spurs me on. If the mother gives up, then the rest of the family would give up, too.

Of course, his siblings will continue if I’m gone. Since I’m still here, I’m in the frontline because I’m afraid for them because they have their own families.”

Besides, the fight for justice has gone beyond Jonas, Edita said.

“The desaparecidos is not only about Jonas. It’s a bigger thing. There are other people looking for the disappeared. The search should go on.”

Edita has not ruled out the possibility that her son is dead but believes that wherever he is, “he’s at peace.”

“I don’t deny that. There are only two things: either he’s alive or not. He could have been murdered. But he can still be alive. I’m not discounting that possibility. Logically, after all those years that he has gone missing, it’s possible he is gone. Whatever state he’s in, I’m happy that he’s at peace.”

Edita said she began feeling that way one Christmas.

“There’s a feeling that a mother feels that her child is no longer being harmed. But right after the disappearance I knew that he was enduring pain. You couldn’t explain it but you were troubled. I don’t feel that way anymore. He must be at peace.”