Powerful People and a Book They Almost Stopped 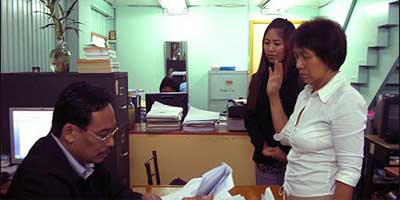 Marites Dañguilan Vitug took an oath before a Manila prosecutor when she filed her rejoinder in a libel case that a Supreme Court justice had filed against her, related to the publication of her book, “Shadow of Doubt: Probing the Supreme Court.” Photo by Purple Romero.

Powerful People and a Book They Almost Stopped

When a Philippine investigative journalist revealed the inner workings of her nation’s Supreme Court, the country’s largest book publisher and leading distributor walked away.

When I started to report on the Philippine Supreme Court in 2007 for Newsbreak magazine, I was intrigued—and challenged—by its culture of secrecy and its strong system of hierarchy. I couldn't know then that three years later a book I wrote to help chisel away at the court's wall of secrecy would confirm the court's formidable power and its spheres of influence when the publication and distribution of my book were halted.

The entire judiciary, composed of about 2,000 judges, thousands of court personnel, and headed by the Supreme Court, is cloaked in this secretive culture. It is vastly different from its co-equal branches—the executive department and Congress. In these places, cabinet officials, senators and congressmen freely talk to the media. Journalists can cover most of their meetings. Public hearings are sometimes aired live on television. Reporters know most of these officials by face and by name. They are elected every three to six years.

The Supreme Court is in a league of its own with justices who are unelected.

During the past administration (2001-2010) they've been appointed more for their loyalty to the president than merit, and they serve until they reach the age of 70. Covering this court reminded me of my days reporting on the armed forces during the waning years of martial law in the early 1980's. Under the authoritarian ruler Ferdinand Marcos, it was hard for the press to penetrate the military.

It was a strictly guarded and fortified camp and the lips of the men in uniform were sealed. Their culture was to follow orders, not to speak their minds. Over time, reporters developed sources within the military, and then the wall of silence cracked, especially after opposition leader Benigno "Ninoy" Aquino, Jr. was assassinated in 1983, and a group of soldiers became greatly disenchanted with Marcos. 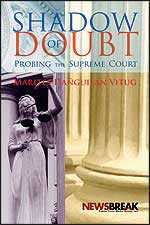 The book I wrote, "Shadow of Doubt: Probing the Supreme Court," opened a window on the Supreme Court's inner workings. It was the first of its kind in the Philippines. The investigative reporting I did to write it revealed the ethical violations of justices and the book examined politicized appointments.

What happened next—the story behind my book's circuitous journey to its eventual publication by a news organization—tells much not only about the way the court functions but also about Philippine society. Those unfamiliar with the Philippine judiciary might believe that the Supreme Court is the least powerful branch of government because it has no hold over the purse or the sword. Yet my experiences with my book confirm that the court wields a strong, yet quieter power derived from its mystique, a certain aura of mystery which comes out of its silence. There is power from being the least known branch of government, the least scrutinized, the least transparent. There is power from being at the top of an exclusive club, where the public has little access and is given only a rare glimpse.

Another lesson I learned along the way is more about journalism than about the court. Neither independent publishing nor independent journalism has yet taken firm root in Philippine society. We have a free and raucous press—until powerful vested interests are endangered or hurt. Then, only a few of those roots turn out to be very strong.

I approached Anvil Publishing, Inc., the largest publishing house in the country. Anvil was going to publish and distribute "Shadow of Doubt," ensuring that it would be sold through its sister company, National Book Store, the leading bookstore chain in the country. Our collaboration was on As we were preparing to launch ‘Shadow of Doubt’ in March 2010, I received calls and text messages that Supreme Court Justice Presbitero Velasco, Jr. had filed a 13-count libel lawsuit against me. This may be the first time in the Philippines that a sitting justice has sued a journalist for libel.track—until I finished the manuscript. Then Anvil's lawyers advised them not to publish the book.

They shared this news with me at a lunch meeting at a Mediterranean restaurant. At that moment, my salad topped with feta cheese lost its zing and the grilled chicken suddenly tasted flat, bereft of all its spices. This was a business decision; Anvil's owners are among the wealthiest people in the country and own businesses outside of publishing. Part of doing business in the Philippines means keeping good relations with the courts—in the event that business owners get embroiled in legal troubles.

My disappointment, however, was short-lived. Newsbreak, where I was editor in chief, agreed to publish it. This magazine remains one of the few news outlets in the Philippines that nurtures and fearlessly supports independent journalism. (I dedicated my book to the team of colleagues and friends there who stood behind this project.) Since publishing "Shadow of Doubt," Newsbreak has published two more books about corruption—one on the Philippine military and the other on infrastructure contracts during the presidency of Gloria Arroyo. Until recently, book publishing is not something our magazine did.

Though no longer the book's publisher, Anvil had agreed to distribute it. Yet even this promise dropped away once buzz about its content apparently worried some people at the Supreme Court. Anvil then decided it would no longer have anything to do with getting the book into the hands of readers. Losing such a big distributor was like taking away 80 percent of its potential audience. It was also like turning down the volume of my public microphone so that fewer got to hear my voice and the stories I have to tell. Of some consolation was that smaller bookstores agreed to sell the book.

As we were preparing to launch "Shadow of Doubt" in March 2010, I received calls and text messages that Supreme Court Justice Presbitero Velasco, Jr. had filed a 13-count libel lawsuit against me. This may be the first time in the Philippines that a sitting justice has sued a journalist for libel. His lawsuit had to do with a story published on the magazine's website, www.newsbreak.ph, about how Velasco was getting involved in local politics in the process of helping his son, who was then running for Congress. This news had become part of the book's epilogue.

Almost a year later Velasco again sued me; this time, my book was his target. Libel is a criminal offense in the Philippines, and my case is now pending in a Manila court. I was scheduled to be arraigned in September, but my lawyers asked for a deferment so that the Justice Department, which is not under the Supreme Court's supervision, can review the case. While we wait, I've posted bail so that I don't get arrested.

After my book was launched, threatening text messages were sent my way. Whoever was sending them clearly wanted to upset me. In essence they implied that I should have been one of those killed in the Ampatuan massacre—but who knows, I may be next. (In 2009, 57 people, including 32 journalists, were brazenly killed in the southern province of Maguindanao.)

The Supreme Court spokesman dismissed these threats as "funny" and "ridiculous." He insinuated that the threats were a gimmick to "generate sales for the book." His reaction and that of others were also due to this being the first time that a book pierced the cocoon of the Supreme Court. When people, such as these justices, aren't accustomed to being held accountable, they expect that when they do things that might not look good, such acts won't be made public. In turn, nothing will happen to them.

When the book was finally launched, I remember saying that "if there is any sadness I feel, it's a tiny core of profound sadness that, in our society, we seem not to understand the meaning of independence, the value of research, and the role of journalists." Only the presence of Newsbreak—and its independence—enabled my book to be published. For others who lack access to such an alternative, the expanding presence of digital self-publishing platforms offers possibilities that didn't exist only a few years ago.

On the positive side, I was surprised when my book became a bestseller, by Philippine standards. The Kindle version was, at one time, among Amazon's top 10 bestselling books about the courts. Readers told me that my words touched a soft spot in their hearts, reaching the place that a story honestly told can. Clearly there is a longing for honesty and a desire for change in a judiciary perceived to have lost its moral rudder.

A son of a judge in a province wrote to me, saying that his father, after 28 years of serving in the judiciary, still lives in a rented house and drives a jeep to work. His only luxury in life, the son wrote, is the printed word. The dutiful son said he was going to give the book to his father.

His letter has helped me get over the initially bruising experience. I'm now starting to work on a sequel.

Marites Dañguilan Vitug, a 1987 Nieman Fellow, is the author of "Shadow of Doubt: Probing the Supreme Court" and chairwoman of the advisory board of Newsbreak, the independent magazine where she was editor in chief for almost 10 years.