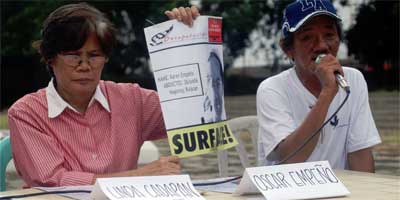 In a resolution released Dec. 15, a Department of Justice (DOJ) panel found probable cause to file charges against retired Major General Jovito Palparan and his men for the abduction of UP students Sherlyn Cadapan and Karen Empeño, and farmer Manuel Merino.

Teary-eyed Erlinda Cadapan, 60, said she is somehow happy to receive the news. “I’ve been waiting for that for years,” she said.

In a resolution released Dec. 15, a Department of Justice (DOJ) panel found probable cause to file charges against retired Major General Jovito Palparan and his men for the abduction of the Mrs. Cadapan’s daughter Sherlyn, her companion who is also a UP student Karen Empeño and farmer Manuel Merino.

Sherlyn and Karen, both students of the University of the Philippines (UP), were abducted on June 26, 2006 by suspected soldiers under the command of Palparan, then commanding officer of the 7th Infantry Division of the Philippine Army. Since the two have gone missing, their mothers went to courts, police stations, military camps, hospitals and morgues in searching for them.

I will not be happy until I can embrace her 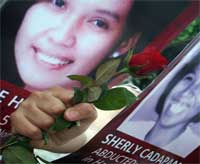 “My happiness is not complete. Until they surface Sherlyn, until I would be able to embrace her, I would not be really happy,” Mrs. Cadapan told Bulatlat.com in an interview.

In the same vein, Mrs. Concepcion Empeño said that after almost six years, they finally saw light in their long search for justice.

“This is just the beginning. Palparan should be imprisoned,” Mrs. Empeño told Bulatlat.com in a phone interview.

Human rights group Karapatan welcomed the DOJ resolution, “For the first time, a notorious human rights violator like Gen. Jovito Palparan is being charged in court. This is an initial step to end the culture of impunity,” Roneo Clamor, Karapatan deputy secretary general, said.

In a 36-page resolution, the DOJ panel of prosecutors investigating the incident found “probable cause” to charge Palparan, Lt. Col. Felipe Anotado, Master Sergeant Rizal Hilario, and Staff Sergeant Edgardo Osorio with two counts of kidnapping and serious illegal detention in connection with the abduction of the two UP students.

In May, the mothers of the victims filed a complaint before the DOJ against Palparan and other military officials for rape, serious physical injuries, arbitrary detention, maltreatment of prisoners, grave threats, grave coercion, violation of Republic Act No. 7438 (An Act Defining Certain Rights of Persons arrested, Detained or Under Custodial Investigation), violation of the International Covenant on Civil and Political Rights, and violation of Convention Against Torture and other Cruel, Inhuman or Degrading Treatment. The DOJ panel conducted several hearings, including a clarificatory hearing, on the case.

The DOJ said the military who took the two women “committed the acts not in relation to their office but in violation of their sacred duty of protecting the People and by acting outside their oaths of incude, thereby acting as if they are private individuals.”

The DOJ concluded that “Palparan had a direct hand in the detention of Sherlyn and Karen and that through his men, he had knowledge and control of the places where the women were held.” It gave weight on the “positive testimony” of witness Raymond Manalo http://bulatlat.com/main/tag/raymond-manalo/.

Manalo, who was held captive by the military for more than 16 months, also positively identified Anotado and Hilario as being present in the scene of the crime.

Meanwhile, Osorio was identified by another witness Wilfredo Ramos during the preliminary investigation as one of the armed men who took Sherlyn and Karen on June 26, 2006.??The lawyers who handled the case are also happy with the DOJ resolution. “The DOJ resolution sends a clear message to human rights violators, especially top military officials, that abuses must stop,” Cristina Yambot, one of the lawyers and a member of the National Union of Peoples’ Lawyers (NUPL) said.

“Holding Palparan for trial is long overdue amidst the several crimes he perpetrated against activists and those who espouse dissent amidst injustice. While this is just the start of a long and rigorous trial to make Palparan account for his crimes, this is a significant victory for human rights defenders and a big step towards ensuring respect for human rights in a country that has witnessed monstrous human rights violations in the past decade,” Edre Olalia, NUPL secretary general, said.

“At long last, justice has caught up with Gen. Palparan and his ilk. The resolution sends a strong, clear and loud message to human rights violators that they cannot just get away with their inhumane acts and that there is no other place for them but behind bars. It should help abet the longstanding climate of impunity, the offspring of the anti-insurgency policy of the state that has no regard for human rights and the law,” Olalia added.

Lorena Santos, Desaparecidos deputy secretary general, noted that it took more than five years before the perpetrators will be facing charges. “They should have been in jail long ago,” Santos, whose father Leo Velasco remains missing, said.

Santos also said they are not satisfied that Palparan and the others accused are only charged with kidnapping.

The Anti-Enforce Disappearance bill seeks to criminalize the crime of enforced disappearance.

Karapatan called on the DOJ to immediately issue a hold departure order against Palparan and the other respondent. “No dilatory tactics should be allowed nor special treatment be accorded to Palparan and his officers like what was accorded to Gloria Macapal Arroyo,” Clamor said.

The Supreme Court earlier issued a temporary restraining order on the issuance of Watch list and Hold Departure Orders.

Santos, meanwhile, said Arroyo should also be made accountable for human rights violations. “Palparan was Arroyo’s favorite general,” she said.

Mrs. Cadapan agreed, saying that human rights violations are part of Arroyo’s policy. She recalled how Arroyo praised Palparan during one of her State of the Nation Address (Sona) speeches. “Gloria [Arroyo] recognized Palparan for going after activists whom they regarded as criminals. It is a policy of government. Gloria should also be punished,” Mrs .Cadapan said.

For the two mothers, the struggle is far from over.

“Christmas would still be sad. One more year will pass, Karen is still not here,” Mrs. Empeño said, her voice breaking.

Mrs. Cadapan said her family will have to content themselves celebrating Christmas without Sherlyn. Just like the previous years, they would place Sherlyn’s photograph at the center of the table as they gather in prayer.

Witness testifies he saw the missing student in a military camp where he had been taken after he was kidnapped by paramilitary soldiers.

A farmer  told the Court of Appeals that he saw the missing student of the University of the Philippines, Sherlyn Cadapan, chained to a bed in a military camp in Bulacan.

Raymond Manalo testified during a hearing on an amparo petition filed by the mothers of Cadapan and Karen Empeño, another missing UP student, to stop the military from harming their daughters as well as Manuel Merino, who was allegedly abducted with the women. The mothers are seeking the release of the three.

The Supreme Court earlier issued a writ of amparo directing the appellate court to conduct a hearing on the mothers? petition to determine if there is basis to grant their plea for the protection of their daughters.

Cadapan, 30, a community organizer for Anakbayan, and Empeño, 23, a member of the leftist League of Filipino Students, were allegedly abducted in June 2006 along with Merino, 57.

Manalo, 33, and his brother Reynaldo, 23, were allegedly abducted from their homes in San Ildefonso, Bulacan, in February 2006 by troops of the paramilitary Citizen Armed Forces Geographical Unit (Cafgu).

The Manalo brothers, who have been accused of being guerrillas of the communist New People?s Army and of killing a Cafgu member, escaped reportedly from military detention in August and are now under amparo protection.

The military has been accused of involvement in the kidnapping of the students and their companion and of the Manalo brothers?a charge denied by the military.

Manalo yesterday testified he first saw the UP students at Camp Tecson in Bulacan, which was used by the 24th Infantry Battalion, in September last year.

He said he met Cadapan first and added that he managed to talk to her because he had been ordered to clean the barracks where they were detained.

We could talk and exchange stories freely. Sherlyn was in chains, but I was not. I was the one who cleaned the room,? Manalo testified.

Manalo said Cadapan?s foot was chained to a double-deck bed.

He said he and Cadapan, who wore fatigue shorts and a T-shirt, talked about their lives, and that the student had mentioned her parents. She told him that she had been abducted by the military.

Empeño and Merino arrived at Camp Tecson two days after he met Cadapan, Manalo said. They were brought to a separate room. He said Cadapan told him that she recognized their voices.

Under questioning, Manalo narrated that he, his brother and the UP students were later brought to Limay, Bataan, from Camp Tecson.

He said he was unsure if the place in Limay was a military camp because what he saw were nipa huts. The Manalo brothers and the UP students also were brought to a safehouse in Iba, Zambales, Manalo said.

Later, the group was returned to Limay, where the students were separated from Reynaldo Manalo. He last saw the UP students in June.

Manalo also identified Cadapan, Empeño and an Oscar Leuterio through pictures shown to him by Rex Fernandez, the lawyer of the students' mothers. Manalo said he saw the three while in detention.

Leuterio was allegedly abducted in April last year and had testified that he saw the students in a Nueva Ecija military camp in June 2006.