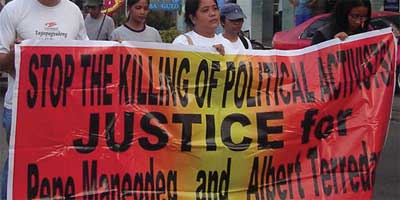 The widow of a church worker killed in Ilocos Sur six years ago renewed her call to President Noynoy Aquino for the reinvestigation of the case of her husband dismissed by the Provincial Prosecutor on mere technicalities and what rights advocates descdribed as “irregularities.”

Dom-an Manegdeg, the wife of Ilocos – Cordillera Rural Missionary Program coordinator Jose “Pepe” Riveral Manegdeg III, urged that an impartial and fair reinvestigation be conducted on the killing of her husband. Philippine National Report (PNP) reports from San Esteban, Ilocos Sur showed that he (Manegdeg) was murdered along the highway in Apatot of that town on November 28, 2005. 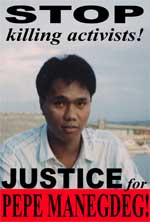 JOSE 'PEPE' MANEGDEG III was the Rural Missionaries Program Coordinator for the Ilocos and Cordillera regions when he was gunned down by unidentified assailant(s) on November 28, 2005 in San Esteban, Ilocos Sur. Pepe had just come from a paralegal training where was a resource person.

Pepe  worked with tobacco and rice farmers of Ilocos and the vegetable farmers of the Cordillera as a human rights and church worker. Her call is based on supporting documents from the Ilocos Sur Provincial Prosecutor’s Office showing alleged irregularities on the dismissal of an information for murder filed against an Armed Forces of the Philippines’ Capt. Joel Castro, who was earlier identified by the lone witness as a perpetrator of the crime of murder.

The prosecutor’s documents identified lawyer Roman Mario V. Panem as the lawyer who subscribed the joint affidavit of Capt. Frederick Galang and Capt. Alexander Rodrigues which stated that the respondent Castro was in the Philippine Army Headquarters in Fort Bonifacio, Taguig City when the incident happened. Their affidavit was dated January 25, 2007.

Earlier on January 12, 2007, the same lawyer – Panem – subscribed Castro’s counter-affidavit with a prayer for dismissal. His affidavit denied all the allegations in the earlier statement by the lone witness Fenio Caceres, a tricycle driver who fetched Manegdeg from a resort and brought him to the Apatot highway.

Raising the eyebrows of Manegdeg’s kin and human rights advocates, Panem also subscribed on March 7, 2007 the supplemental statement of Caceres which totally repudiates his previous statements with the police identifying Castro as the culprit and now pointing out that Castro is innocent of the crime filed against him.

Questions were also raised in the resolution that trashed the murder information filed against Castro as a result of an investigation by Prosecutor Redentor C. Cardenas and approved by Provincial Prosecutor Jessica G. Villoria on March 30, 2007.

The said resolution stated that the police were involved in a fishing expedition. The resolution stated that the reasons for the dismissal are as follow: that the original statement is a xerox copy which violates the rules on evidence; such statement failed to contain certification that the subscribing officer personally examined the witness and that he was satisfied that he (witness) voluntarily executed and understood it; that the witness categorically declared that he could not identify the shooter; and, that the witness supplemental statement was full of leading and suggestive questions.

The above reasons, which are technical in nature, could have been remedied for the interest of justice, said a human rights lawyer, who requested not to be identified. The prosecutor could have ordered that the original statement be submitted or they could have conducted means to determine the truthfulness of their questions.

The alleged irregularities pushed Manegdeg’s widow to call for reinvestigation.

Particularly, her letter to the DOJ appealed that the case be reinvestigated and re- opened, that the witness be placed in the witness protection program, transfer the venue from Ilocos Sur to this city, and assign a special prosecutor to the case.

She said that she received an email copy of the DOJ letter endorsing the case to a certain Undersecretary Baraan on August 31. She requested from them for an appointment. “Nothing happened so far. But I will still raise my husband’s extra-judical killing, whether here or abroad,” said Dom-an.

Jose 'Pepe' Riveral Manegdeg  III  (37) was the regional coordinator of the Rural Missionaries of the Philippines (RMP) for Ilocos and the Cordilleras when on  November 28, 2005 he was shot and killed at San Esteban, Ilocos Sur as he waited for a bus to Manila. Two masked men on motorcycles pumped 22 bullets into him before riding away.

Faced with his death and the ordeal of bringing up two little girls aged 6 and 9, his wife Dom-an took up writing about the injustices faced by families such as hers and urging that the perpetrators be brought to justice.

But soon faced with the same fate as that of her husband, she was forced to flee her home with her children.

I first noticed the presence of two masked men on motorcycles in our peaceful and isolated neighbourhood of Baguio City on July 30, 2006.  The very next day, we heard that Alyce Omengan Claver a human rights and social activist was killed when the vehicle she was travelling in was sprayed with bullets. Her husband, a doctor of the people and with her at the time, was seriously injured but survived.  I reported the incident to the relevant state authorities, relatives, friends and our church community. But the news gave me an uneasy feeling.

Considering the rise in the number of killings by masked men on motorcycles, I was warned to be vigilant and use commonsense when needed. Mockingly, it seems, the Civilian Intelligence Detective Group (CIDG) even offered me a licensed gun to protect myself.  Nevertheless, I refused to panic. But a few days later on August 7, again we saw two masked men riding the same motorcycle bearing plate number AF 1033.  Sensing danger and after consulting friends, I quickly threw a few pieces of clothing into a bag, and together with my two young daughters fled our rented home.

Later it was discovered that AF 1033 had been registered not in Baguio City but in Ilocos the place where my husband Pepe was killed. But agents at the Ilocos National Bureau of Investigation (NBI) have still not checked the ownership of the vehicle. This is probably because there have been threats to and even killing of members of the Intelligence  Services  who dared to do their job efficiently, thus effectively silencing  others.

Even after we left, a cousin of mine told me that these masked men on motorcycles were seen going up and down the road leading to our house, several times in the succeeding months. They never stayed for long. Once she had even been awoken early in the morning by the sounds of barking dogs and seen strange men exploring the 109 steps leading to our house. They were wearing motorcycle helmets and masks.

Who were these men? And who sent them on what purpose?  Their behaviour definitely did not look like that of adventure seekers or mere bikers. They concealed their faces and bore emptiness in their eyes.  Their aura was suspicious and their presence warned of danger.

My  beloved  husband  Jose Pepe Riveral  Manegdeg  III  of  the  Rural  Missionary  of  the Philippines (RMP)  was  brutally  shot 22 times and killed on November 28, 2005  near the tobacco fields   in  San  Esteban,  Ilocos  Sur. He had just finished a talk to fellow workers on peace, justice advocacy and grassroots organizing. He was waiting for a bus to Manila, to meet with fellow church workers and make preparations for the arrival of an international delegation of the United Methodist Church. In the afternoon he was to meet me returning from employment in Hong Kong at the Ninoy Aquino International Airport.  It was then; he was slain by two masked motorcycle riders. After he was killed his mobile phone, wallet and money were removed.

Later some military personnel in the area had discreetly admitted that he was to have been executed earlier, on November 22, but some soldiers were opposed to it as they knew Pepe as a town mate.  He did write about being harassed by suspiciously behaving men who had followed him in the bus and then spoke to him about following up a case of so-called organized crime. Yet, the order to execute had nonetheless been issued and accomplished a little while before a happy family reunion could take place.

Pepe was  a  radical  alright for seeking changes  in  a  social  system that  perpetuated inequality,  poverty and  violence;  for initiating a  publication  on Church  and Society   entitled  'Writing  on the Wall'; and for writing  project  proposals  and  charismatically  appealing to advocates, ecumenical  partners,  enlightened  politicians  and others for  funds  and  resources  to  be  channelled to  a region  long impoverished  by  land  monopoly  and  local  tyranny. He was also a revolutionary for transcending his own  personal  poverty and  woundedness  and  transforming  his energy   to  the greater  cause  for social  justice  and  world  peace;  for loving his children  and  other  children,  his  family  and other families and last but not least, for being a compassionately loving husband to me.

What a grave mistake it was to kill such man.  For  his  death  simply  released  his  spirit  to  inspire  a great  movement  on  earth  as  it  is  in  heaven.  But it is indeed sad that young men and women like him continue to be killed like sacrificial lambs.

During  and  after   the  wake  of  my  husband,   it  was  blatantly  absurd  and disrespectful to  the  solemnity  of   mourning    to   see   military  men  and  their   intelligence  agents  lurking  around the burial site. Two of them were on a black motorcycle bearing No. BI 9872. They had the audacity to join the vigil, but slipped away when people started looking at them. They were even heartless  enough  to   spread  disinformation   about  my  husband   and   rumors  of  killing  me  as well as his brothers  and sisters.   Four months later, my brother-in-law who was a fisherman went missing and his body was later found mutilated.

And even as we try to move forward as widow and fatherless children, we are not spared more terror.  For is it not sheer horror to lose two brothers  in  senseless  violence,  a husband  in  extrajudicial  killing,  a brother-in- law  in  murder and then as I am picking up the pieces, my life is threatened by masked men for my writings  and  pleadings?

All this, while the killings continue around us