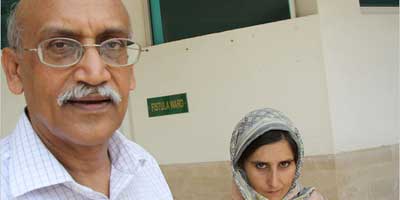 "I had one woman who had fistula for 41 years. It took me half an hour to repair her. She said to me “I can pray again now”. She was fine. Her face….you could see she was so happy."

Dr. Shershah Syed is a man dedicated to improving the health care of women in Pakistan. After witnessing women dying and suffering during and after childbirth, Dr Syed committed his life and work to bringing change and raising awareness for women's health.

Though accomplished and successful in his career in obstetrics-gynecology, Dr. Syed left the UK and returned to his native Pakistan, determined to use his skills to better the lives of women within the country.

A fistula is simply a hole between an internal organ and the outside world that should not exist.  There are two primary causes of fistula in women in developing countries:  childbirth – causing obstetric fistula, and sexual violence – causing traumatic fistula.

At the Helm of Improving Women's Health in Pakistan

I have read how the plight of women led you to leave your practice and dedicate your work, resources, and time to those in poverty and isolation. Was there a turning point – or one incident, that caused you to make this decision?

I trained in Ireland, Galway then Belfast. After this I studied at Cambridge and Oxford, but I always thought that I would go back to Pakistan. When I studied, I never realized that the maternal death rate was so high.

All the material I read and studied was American and English. Thebooks I read were American and English, so I had no idea of the statistics until I came back. I thought I would return and start working in a government hospital, but this is difficult because you need connections.

So, I asked if I could teach at a local hospital.

I asked, “What is DOA?” and I was told it meant dead on arrival.

I was in shock. This was the LAST thing they reported! It should have been the first! I asked about this and why this had happened.

I was told “Are you coming from the moon? Women die!” That’s how it was explained to me, that 40% of women here were dying and suffering!

After the meeting, we went on the rounds. We walked past one room and there was a terrible smell coming from it. No one wanted to go in. I asked, “Why is no one going in this room?”

I was told it was the fistula ward.

These women were just left in there and fed.  Smelly, uncomfortable and left completely alone.

In Ireland, in the UK, I had NEVER heard of fistula. I was trained as an IVF (in-vitro fertiziliation) doctor, working with test tube babies.

After this, I lost all interest in creating babies and IVF.

I started doing something!

You started a maternity wing at a public hospital and began seeking funding for developing a hospital in Karachi. Through these projects, as well as directly saving women’s lives, do you see a changing attitude towards women’s health within these communities?

After a few years of working I thought, “Why are these women not being looked after?”

Then I realized that women have no status in this society.

It doesn’t matter here if a woman stays alive, and It’s not uncommon for a man to have two wives –  not common practice, but not uncommon.

How have these attitudes changed your approach? Have you had to work more dynamically to combat the attitudes within society?

I have become active in the medical association. I have worked with Amnesty and helped Amnesty take up cases in Pakistan. I’ve worked with UNICEF and I’ve realized even with the current doctors you cannot change maternal health. Doctors won’t leave the city.

In the hospital I asked to be transferred to a maternity home.

When I got to Karachi I found no maternity doctors. No training. No trained midwives. The midwives that did undertake training, qualified without even one delivery.

There were no books in Urdu and the only teaching materials were incomplete notes made by past students.

I asked a friend of mine for help, and we began to translate books into Urdu.

Now, our students have books and materials for teaching. My friends helped raise funding and now we have a midwifery course.

You have mentioned that though the disasters and number of deaths have shocked many people around the globe, the government still does not actively strive to make changes and reform the current support available. How do you see reform being a reality?

In Pakistan the rural hospitals are empty of midwives and nurses.

The government will only change if the donor governments such as the United States, United Kingdom and Japan demand change.

We need a basic education system.

Educate the women and she will change the entire family. Every kid needs to go to school.

We need to get rid of the huge PHD program and focus on a basic education system.

People don’t want to take polio drops because they are scared they will be poisoned, and people would rather listen to rumor than the truth.

Without education this will continue – and the illiteracy of our people will continue to be the biggest weapon our government can use against us.

Lack of education is the largest cause of health care problems in Pakistan.

Raising awareness is the biggest thing that the general public can do. Tell people our stories. Let people know.

Your work must be incredibly emotional at times, and I am sure you see much tragedy. Are there particular success stories or survivors that have inspired you during your work?

There are so many names, so many stories.

I had one woman who had fistula for 41 years. It took me half an hour to repair her. She said to me “I can pray again now”. She was fine. Her face….you could see she was so happy.

My midwives are my successes!

They are trained and improving families. These girls have become empowered. They are often from the lower classes and they work and improve their lives.

They join the school and they train extensively and treat around 5,000 women each year. This makes me happy but then I think of the other 2,000 women per year we cannot reach and that breaks my heart again.

What do you see in the future for your work? We understand you’re striving for training and education of support staff and midwives. Do you feel these will be the people who will take your work forward? Do you envisage further clinics and support centers in the future?

We need to get good salaries for our doctors and teachers.

Then good people will come to Pakistan and stay. People who are trained leave for the United States, the  United Kingdom, and we need to offer good salaries to improve the situation.

Our nurses and midwifes are now trained, and they make good money; this increases their value in their society. This is positive for the future.

Now that some women are treated and healed they have second marriages. They are happy and this can be seen on their faces and by others.

We try to raise funding and reach as many women as we can. Now every month we travel with a mobile camp to rural areas and reach women who do not receive care. 99.9% of fistula patients are poor.

The rich leave for treatment, but we continue to take our work to women who cannot reach us.