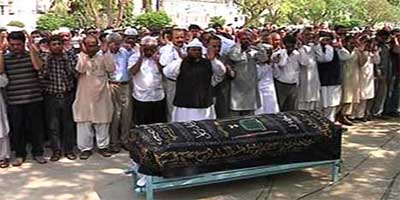 The funeral of one of Pakistan's top development workers - shot dead on Wednesday - has been held in Karachi. Parveen Rehman was killed by four gunmen while travelling in her car near the western Orangi area of the city.

Ms Rehman was head of the Orangi Pilot Project, one of Pakistan's most successful non-profit programmes, which helps local communities escape from poverty.

Scores of people attended the funeral, including relatives, friends and members of civil society.

Ms. Perveen Rehman (56), worked for the betterment of the poor and neglected

When a small lady weighing hardly 60 kilograms working for the betterment of poor slum-dwellers, and amongst the under-privileged in poorer residential areas, is viewed as a dire threat to the Taliban and the local administration, the sanity of these institutions, and those that man them, is called into question. However, with yesterday’s murder of Ms. Perveen Rehman, an even more fundamental question confronts us: the raison d’être of the Pakstani state itself.

Ms. Perveen Rehman, an architect by profession, was targeted and murdered in broad daylight yesterday, March 13th. Fifty-six years of age, having worked for the poor and underprivileged for 25 of them, Ms. Rehman was murdered close to her office as she arrived in a car. Armed men riding two motorcycles approached and opened fire on her. She was struck twice in the face and once in the neck. She was rushed to the Abbasi Shaheed Hospital where she succumbed to her wounds.

It is believed that she was assassinated by Deobandi militants of Ahle Sunnat Wal Jamat (ASWJ). These are said to be the same militants responsible for the deaths of the four lady anti-polio workers and the attack on Malala Yusufzai.

Ms. Rehman was a tireless social activist, working for people living in slum areas. She had, however, been receiving death threats for some time. She had more recently been documenting the situation in villages (Goths) around Karachi many centuries old, now virtually under the control of land grabbers, Muslim extremist groups like the Taliban, and the police. The poor people of these areas have been, and are being, deprived of their residential rights and the lands of the Goths have been demarcated in plots and turned into new colonies. Most of the persons affected are indigenous and poor. The land grabbers enjoy the protection of the police and other law enforcement agencies, and if any questions are asked, Muslim extremists come to the rescue justifying anything under the ruse of defending Islam.

Ms. Rehman was originally trained as an architect. She started her career with a prominent architectural firm. However, she soon decided to change track and work for the betterment of poor people living in slums and neglected residential areas without facilities of sewage systems, access to drinking water, and basic health facilities, places where the young have little chance of education and employment. It was 1981 when she made this life-altering decision. Since then she had been working with the Orangi Pilot Project (OPP), one of the largest squatter settlements in the world. Inspired by the work of the renowned social scientist Akhtar Hameed Khan, she worked on helping people construct low-cost sewage lines in the area. She was also in charge of the micro-credit programme of the OPP, which has worked for the empowerment of the local women-folk.

The Governor of Sindh, Ishratul Ebad, in a statement to the media had said that "killing a social worker is inhumane." It is a wonder how the Governor could bring himself to make such a statement. Could it be that the Governor had to resort to such a puerile remark to try and mask a deliberate failure – that of providing adequate protection to social workers? Perhaps the Governor thinks that for their next assassination target militants will take extra care in order to make a more 'humane' killing.

Pakistan has been plunged into a situation where target and sectarian killings are a daily occurrence. While any person, male or female may become the target of the Muslim extremists simply for holding an opinion contrary to theirs, the most common victims are the religious minority groups who are virtually at their mercy. Recent events have proved conclusively that any woman who dares to work, in any capacity, is also at risk and, as in the case of Malala Yusufzai, this daring behavior includes exercising a right to education.

Perveen Rehman's killing is a message to human rights defenders that they are not invulnerable from the clutches of the extremists and that anyone who works for the benefit of the underprivileged, not considered to be within the orbit of Islam, does so at their own risk.

The death of Perveen Rehman, who wanted nothing more than to work for the betterment of the people and communities that the government continues to ignore is terribly sad, not only for her loved ones but for the people that she was trying to help. There is no protection for women who suffer rape and domestic abuse on a daily basis. Similarly, human rights defenders and media personnel who make any effort to expose the truth behind the sectarian violence are considered fair game by the militants and once again the government does nothing to protect them.

Until such time as the governments of Sindh and of the country make a stand against sectarian violence and the crime that pervades the very streets of every city Pakistan will remain a country suffering from the worst type of insanity; the insanity that allows innocent men, women and children to be harmed in the name of religion and greed.

Providing security to its citizens is a non-derogable responsibility of the state of Pakistan. If the Pakistani state cannot provide protection to tireless social workers like Ms. Rehman, who help the poor and vulnerable, which is itself a responsibility of the state, then the most fundamental question regarding the very reason for the state springs. For whom or what does the state exist? For whom does it provide security? What is the social contract that citizens have signed to come together and be citizens of this state, giving up their freedoms in the state of nature to accept the security provided by the entity that is the Government of Pakistan? The failure to provide security to Ms. Rehman indicates how close Pakistan is to complete collapse. Anything good the state does for average citizens can now only be as a by-product of other base motives or simply a miracle. Are we fools or mad ourselves to continue to hope against hope for the miracles that the state will fulfill its responsibility and secure its citizens?

Disclaimer: Views are those of the Asian Human Rights Commission and do not necessarily reflect the views of Safe World for Women or its staff.