"Our Daughter Stands for Peace and Education" - Ziauddin Yousufzai 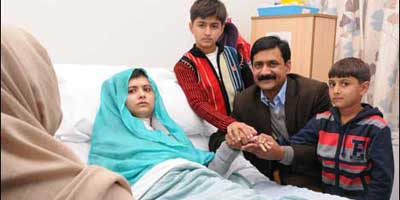 Malala's Family Join Her at Hospital in Birmingham

The response of Pakistan to the shooting of the schoolgirl Malala Yousafzai was a "turning point" for the country, her father said Friday at the British hospital.

“When she fell, Pakistan stood and the world rose. This is a turning point," a clearly emotional Ziauddin Yousafzai told journalists.

He said Malala, 15, was recovering "at an encouraging speed" in the Queen Elizabeth Hospital in Birmingham, where she was brought from Pakistan on October 15th.

"She is not just my daughter, she is everybody's daughter," her father said.

Talking about his influence on Malala, Ziauddin said his daughter became an activist at an early age because she has seen him being one: "She is a children's rights activist."

“My daughter is my companion, we are good friends. She corrects me at times and tells me how to do certain things,” he said.

He thanked the doctors at the hospital in the city in central England, saying: "She got the right treatment, at the right place, at the right time. She is recovering at an encouraging speed and we are very happy."

He said Malala had asked after her two friends who had been shot with her.

At one point, Ziauddin had to stop and compose himself as he recalled how in the aftermath of the shooting he asked his brother-in-law to make arrangements for a funeral because he did not believe Malala would survive.

When asked how he felt when he and his family saw Malala for the first time since they arrived in Britain on Thursday, he said: "I love her and last night when we met her there were tears in our eyes out of happiness. We all cried a little bit."

Malala's mother and two brothers have also come to Birmingham, where the girl is being treated in the highly specialised hospital where service personnel who are seriously injured in Afghanistan are taken.

He said her mother was too camera-shy to attend the media briefing, but pictures released by the hospital showed the family gathered around Malala's bed. Malala was wearing a pale green head covering.

Malala has received thousands of goodwill messages from around the world.

Related Article: Praying for Malala Yusufzai, a Pashtun Symbol of Hope and Courage

Doctors have said a bullet grazed her brain and came within centimetres of killing her, travelling through her head and neck before lodging in her left shoulder.

She requires reconstructive surgery, but she must first fight off an infection in the path of the bullet and recover her strength, which could take months.

Her skull will need reconstructing either by reinserting bone or using a titanium plate.

Daily updates regarding the wellbeing and care of Malala

Cards and donations for Malala