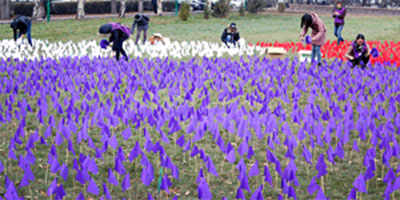 Around 100 UNiTE activists took part in an activity to install coloured flags in the center of the capital of Kyrgyzstan, Bishkek, on 10 December 2012. The 9800 red flags symbolize women who were kidnapped and married against their will, 2000 white flags symbolize the quantity of women suffering sexual violence and 7500 violet flags – women complained officially about domestic violence. | Photo: UN Women/Eric Gourlan

On 20 December 2012, the Kyrgyzstan Parliament approved legislation toughening the penalty for the widely-practiced custom of bride-kidnapping.

The practice of bride kidnapping is widespread in the country and is still considered by some as a valuable tradition.

“According to these ‘traditions’, when a Kyrgyz man wants to get married, he picks a bride and starts to arrange her kidnapping.

This is a grave violation of human rights. Women often experience physical violence and rape.

They feel humiliated and see themselves as property,” explains 37-year-old Kamilla, a volunteer with the Women Support Center NGO.

“My sister experienced all of those terrible things and once she decided to finally divorce him, she was killed by her husband.”

Her husband was subsequently convicted for murder and is serving a jail sentence. But addressing the practice of bride-kidnapping remains a challenge.

Kyrgyzstan: The Women Captives of the Tian Shan Mountains

11,800 cases of forced abduction every year

According to data by the NGO Women Support Centre, which works to eliminate violence against women, there are at least 11,800 cases of forced abduction of women and girls every year in Kyrgyzstan, with more than 2,000 of those girls reported being raped as well .

Only one out of 700 cases is pursued by the justice sector, says Rimma Sultanova, an expert with the Women Support Centre, a statistic emblematic she says of the ineffective law enforcement and justice sector. Only one in 1,500 cases of abduction results in a judicial sentence in Kyrgyzstan .

In a step in the right direction, on 20 December 2012, the Parliament approved legislation toughening the penalty for the widely-practiced custom of bride-kidnapping.

The President of Kyrgyzstan, Almazbek Atambayev, gave the amendment to the Criminal Code his official approval on 26 January 2013.

Once published in early February, the new sentence for forcing women into marriage will now range up to 10 years. The offense was previously punishable by a maximum three-year prison term.

Even though Kyrgyzstan had ratified the UN Convention on the Elimination of All Forms of Discrimination against Women (CEDAW), the Universal Declaration of Human Rights, the Convention on the Rights of the Child and other international treaties which prevent violence and discrimination against women and girls, years of advocacy and mobilization was needed for the legal reform.

“According to Article 36 of the Constitution, no marriage shall be registered without benevolent and mutual consent of the parties to the marriage,” says Ainuru Altybaeva, a Member of Parliament in the Kyrgyz Republic who initiated amendments to Article 155 of the Penal Code, which increase penalties for “kidnapping a women to marry her against her will.”

Ms. Altybaeva and Kamilla, together with a wide range of NGOs, activists, artists, sportsmen football federation, media and the private sector are active participants of the UN Secretary-General’s UNiTE to End Violence against Women Campaign in Kyrgyzstan, which is led by UN Women.

A series of football matches, massive bicycle rides and a flag-installation activity designed to spread “155 slogans” were held in support of the amendments to Article 155 of the Criminal Code, to promote eradication of forced abduction of women.

“Speak out, tell your stories, don’t be afraid – this is how you become the agent of change! You will break the chains, if you start fighting,” says Kamilla. This is what she usually tells survivors who come to the Women Support Centre to seek help. She works there as a volunteer to assist others who faced challenges similar to that of her sister.

Advocacy efforts by civil society groups, supported by UN Women, led to the final approval of the legislation toughening the sanction for the broadly practiced custom of bride-kidnapping.

“It is an encouraging sign of the Kyrgyz Government’s commitment towards the elimination of gender-based violence, and we shall certainly follow the implementation of the new article,” said Sabine Machl, the UN Women Representative in Kyrgyzstan, after the President signed the changes to the law.

* The names of the women mentioned in this article have been changed in order to protect their identity.