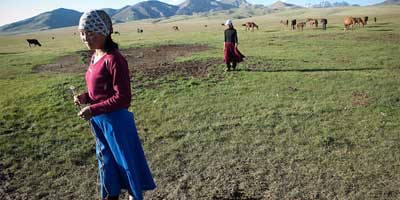 Even though she was kidnapped, pressured into marrying a man from a nearby village, and then abandoned without means to sustain herself and the couple’s two young children, Totugul can’t rely on Kyrgyzstan’s courts for help.

It is a practice in Kyrgyzstan that offers a socially acceptable way for couples to marry without parental consent. There are, however, criminal cases like Totugul’s that involve the forcible abduction of women followed by intense psychological and cultural pressure to marry.

Although bride kidnapping is illegal under Article 155 of Kyrgyzstan’s Criminal Code, prosecutions are almost unheard of. The state can intervene only if a complaint is filed directly by the victim. But, in many bride kidnapping cases, the woman is isolated within the home of the abductor, and must overcome daunting obstacles to contact her relatives or the police. Even if her family is aware that she has been kidnapped, they are usually powerless to press charges against the abductor on behalf of the woman. In conservative villages, opposing a bride kidnapping can also bring the family shame.

Like many kidnapped brides, Totugul – who hails from a small village outside of Karakol in eastern Kyrgyzstan and asked her last name not be printed – had a religious ceremony, or nikaah, to sanction the union. But her marriage was never registered with the state. That left her in a position that many other Central Asian women face; she had limited legal options to seek child support after her husband left her. “My marriage was not registered and no one will help me. Our [village] women’s committee has talked to many government officials but, because our marriages are unregistered, we [bride kidnapping victims] don’t have rights,” she said.

Few bride kidnappings are reported to authorities, says Kamil Ruziev, a human rights lawyer with the Karakol-based NGO Vantus. “Friends of the brides come to our office. The brides can't come themselves because they are locked up in a house. The friends or family try to call the police, but the police can't get involved unless the bride asks for help, which she won’t be able to do,” Ruziev told EurasiaNet.org.

In addition to the legal limitations, Ruziev attributes the underreporting of kidnapping cases to government officials’ implicit approval of the practice.

“The police are loyal to the practice of bride kidnapping. I have asked government authorities for help and, when I protested against the continuation of this practice, they laughed at me and said that bride kidnapping is tradition,” he explained. “No one follows the law, not even the local authorities.”

A human rights advocate working with a women’s shelter in Talas says a lack of professionalism on the part local officials and police is a big part of the problem.

“We have trained the police on how to fill out their own internal forms when women want to file complaints. They do not know the laws and they are corrupt. They are not only proponents of bride kidnapping, but they sometimes initiate it,” said the advocate, who asked to remain anonymous because the shelter works directly with the police.

Talas, an isolated region in northwestern Kyrgyzstan, is believed to have one of the highest bride kidnapping rates in the country. One of the few studies that exist found that, in Karakol, 45 percent of women married in 2010 and 2011 had been non-consensually kidnapped.

As a result of the pressure from the female relatives of the kidnapper, and often pressure from her own family to accept the proposal for the sake of the family’s reputation, most women who are abducted eventually consent to marriage. After the woman agrees, it is unlikely that she will report the kidnapping, as that would require her to press charges against her husband and in-laws, with whom she often, by this point, lives.

Adilet: NGO working for women's rightsMarina Edigeeva, a human rights lawyer with the non-governmental organization Adilet in Talas, says that the majority of her clients are in the same position as Totugul. “Many marriages are unregistered because the bride kidnapping is illegal. It is the man’s decision not to register the marriage because initially he isn't sure how long she will stay, or if she will try to run away,” Edigeeva said.

Edigeeva advocates for greater legal protections for women in unofficial unions, as it is rare for a divorced woman to have her rights upheld in court without state registration. As for criminal charges brought against perpetrators of bride kidnapping, the women who come to Edigeeva tend only seek child support and property rights. She has not heard of a single criminal case relating to bride kidnapping going to court.

Efforts to pass legislation that would strengthen protection against bride kidnappings and subsequent unregistered marriages have stalled. A bill proposed earlier this year to fine Islamic clerics for blessing marriages without a state registration certificate failed in parliament, allegedly because of concerns that it would curtail polygamy, also illegal, but a practice that is thought to be widespread.

Editor's note:
Azita Ranjbar is the author of a forthcoming report, “The Declining Use of Aksakal Courts in Kyrgyzstan,” to be released May 7 by the Eurasia Foundation. The report will be available at equalbeforethelaw.org.