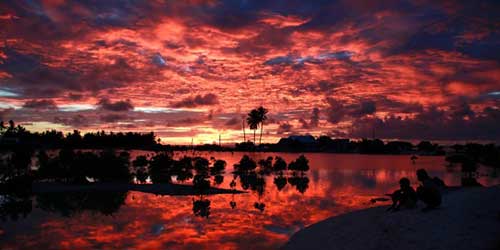 A young female poet from the Marshall Islands has been selected to address an audience including more than 100 heads of state at the opening ceremony of the U.N. secretary-general's climate change summit later this month.

Kathy Jetnil-Kijiner, 26, the co-founder of an environmental NGO, as well as a teacher and journalist, is "really excited for this opportunity to speak on an issue that is really close to my heart", according to a statement on the U.N. Climate Summit 2014 website.

“I want to bring my people's message out to the world, that climate change is a threat that we need to take more seriously," she added.

In recent years, the Republic of the Marshall Islands, an island nation in the northern Pacific Ocean, has suffered from worsening drought and shortages of drinking water, as well as storm surges and floods.

Jetnil-Kijiner writes on her blog that her poetry focuses on "raising awareness surrounding the issues and threats faced by my people". Those include "rising sea level as a result of climate change", forced migration and efforts to adapt to climate change, as well as nuclear testing on the islands, militarism and racism.

Ban Ki-moon's climate summit in New York City on Sept. 23 will gather heads of state and government alongside leaders from business, finance and civil society, with the aim of spurring ambitious action to reduce emissions and strengthen climate resilience.

It also hopes to mobilise political will to achieve a new legally binding international climate change agreement by the end of 2015.

The environmental group poet Jetnil-Kijiner set up with her cousins aims to empower young Marshallese about issues related to environmentalism and climate change and "the impacts it has on our lives", she writes on her blog.

The Jo-JiKuM group's motto is "Liok tūt bok", explained as "like the bōb/pandanus tree which visibly roots itself deep within the land, we, the youth of the Marshall Islands should do the same".

One of Jetnil-Kijiner's poems, entitled "A Bad Sign", begins: “We are shocked to find / the rising waters have displaced / our grave sites.”

Jetnil-Kijiner was chosen after the United Nations issued a call in July for civil society speakers and attendees for Ban Ki-moon's summit. By the Aug. 15 deadline, 544 people had been nominated from 115 countries.

The applicants were asked to email short videos urging leaders to cut planet-warming emissions, according to the BBC. The rules of the competition - the first to select members of the public to address world leaders – stipulated that the person to speak at the summit's opening sessions had to be a woman under 30 from a developing country, the BBC reported.

"If you consider the huge challenges that still exist for so many women across the world to realise their rights to participate in government and how important it is to show young women that they have this right, then we should give the one available slot to speak to more than 100 heads of state to a young woman," Susan Alzner from the U.N. Non-Governmental Liaison Service told the BBC.

“Women disproportionately experience the impacts of climate change in particular because 70 percent of the lowest income people worldwide are women," she added.

Jetnil-Kijiner was chosen from a shortlist of 76, as were three panelists for a thematic debate called “Voices from the Frontlines of Climate Change” and another 34 people from developed and developing nations who will attend the summit.

The three debate panelists are Alina Saba, an indigenous women’s representative from Nepal, Christina Ora, a member of the Pacific Youth Council from the Solomon Islands, and Sylvia Atugonza Kapello who belongs to a civil society network in Uganda's Karamoja region.